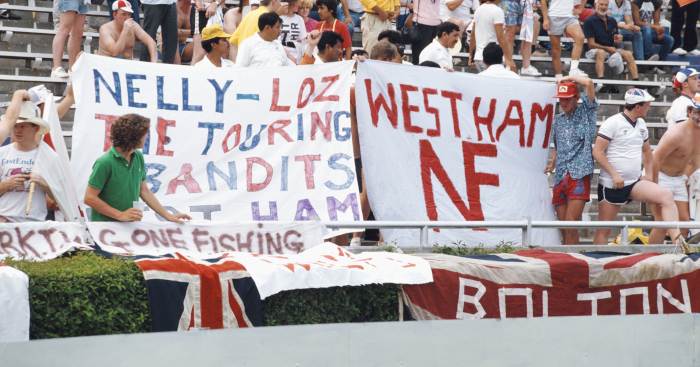 The anti-Semitic chants by some West Ham fans on their way to the game at the Old Trafford and the racist chants by some Chelsea fans in the Europa League are just two more in an ever-growing list of such racist abuse. This article all too vividly illustrates just how racism is shot through the whole of football and of society. It also shows how heinous, oppressive and crushing it is. It is a depressing read.

I was recently recording a podcast with Simon Mundie for the BBC’s ‘Don’t Tell Me The Score’ series and we were talking about many issues in and around football, and it occurred to me as we chatted that although I’d grown up going to football at Middlesbrough FC and stood near to people who would shout racist things and who would make monkey chants in the 70s, I had never subsequently talked to anyone who admitted to doing it, and so I wondered what had happened to them in the intervening years. What did they now think of how they had behaved and how did they see today’s problems? So, in part for the new book I’m writing, ‘Can We Have Or Football Back, Please?’ I went in search of people who fitted this bill to talk to them about how their behaviour had or indeed hadn’t changed. I unearthed three.

The first was a man who is now 58, works as an accountant and has had a season ticket at the Boro for 45 years.

“I am really embarrassed about it, looking back. I was only in my teens but that’s no excuse. I have asked myself why we were like that back then. I know this sounds odd but I wasn’t racist. I mean, I behaved like someone who was, but I wasn’t. I didn’t think black people were inferior or anything like that and I’d have told you that back then. It was actually bullying, that’s what it was. Just like at school, you’d pick on a kid’s most prominent feature. Big nose or ginger hair or whatever. That’s how I thought about it. I’m not excusing it, mind.

“I never thought for a moment what the black players must’ve been going through because I’d never even spoken to anyone black. It was all so much piss-taking to us. We were ignorant. But when I left home and met people from all different races, I obviously knocked it all on the head. Only an idiot wouldn’t have. But I’ve noticed people seem more angry these days, you see it at the Boro. They get riled up really quickly and they pick on players in the way that might hurt them most, just like we did, I suppose. The big difference is, they deliberately want to say the worst thing you can say, whereas we thought we were being funny. They know they’re not.

“I’m not sure if today they’re racists or just twats, or a mixture of racists and twats. I look back on it now and I’m disgusted with myself.”

“You almost never saw anyone who wasn’t white in Middlesbrough back then. When you saw a black player it was  “boo f**k off sambo you c**t”. Terrible, like. But that was how everyone spoke back then. Most of us never meant nowt by it really.”

He stopped at this point and finished his pint. “That makes me look like a right shit, doesn’t it? I didn’t understand what I was doing. Not really. Things have got better. Mostly because idiots like me shut up and realised we were being pathetic.” He stopped again and thought for a moment. “My lad married a lovely Nigerian lassie y’know. Aye. Met her when he was working in America.”

He went up to the bar at this point and returned with two more drinks, setting them down on the table, then taking a sip of his lager. He seemed awkward now. “So I had to tell her, didn’t I?”

“About the monkey noises you used to make?” I said.”You didn’t have to.”

“Aye, aye I did. It had been on my mind a lot. It’s bothered us a lot. I heard Barnes talking about over the years and then tha lad, Sterling, recently. I felt like such a shit.”

He took another quiet drink, a thin veneer of tears glazing his eyes. This was an ex-steel-worker. Hard as you like. Arms like a pit pony’s leg. Skin like an old leather suitcase. His pale blue eyes now watery.

“She…she said she forgave me.” A splash fell from the corner of one eye onto the table. He pushed at it with the palm of his hand, dismissing it as though it was a nuisance. “I told her what we used to say and do. It was like going to confession. I felt terrible – it was like I’d done it to her, almost. I said I was sorry, like. I mean obviously, I said I was sorry.” He let out a sighing groan. “She just told us to let it go. And the fact I’d realised it was so wrong was the main thing. She’s a great lass. These blokes who do that today, they’re not proper men. They’re childish or stupid; haven’t grown up. They probably fancy they’re hard, but they’re nowt. A real man wouldn’t behave like that. Have some respect, y’know? If I heard anyone being racist today at the Boro, I’d give ‘em what for. I bloody would. It’s wrong.”

Finally, I found someone who is 59. I later learned he had been in the National Front in the late 70s as a teenager. This is a short edit of the full, extremely racist diatribe.

“Look, no-one is supposed to say this, everything is so PC, so put this in your book. No-one else will tell you this, but it’s true. The fact is a lot of white blokes (he referred throughout to this being a male thing) don’t like black blokes and they don’t like us. That’s alright. I don’t care. That’s the way life is. We stick with our own, they stick with their own, don’t they? So if they come on our turf, then they’re going to get what’s coming, aren’t they? Fans or players or whatever, you give it to them. Them lot down south (I wasn’t sure who he meant, exactly, the people of Devon, perhaps?) have no idea what life’s like up here. Not a clue. If you think there’s a lot of racist chanting now, you’ve seen nothing yet. It’s all going to kick off, and I can’t wait, son. I can’t wait. It’s time it did.”

He wasn’t uneducated, far from stupid and held down a reasonable job in a B & Q. He may have been hoping to foment some sort of race war, at least in Berwick Hills, or possibly as far east as South Bank, but most of it was bravado: a sort of fantasy. For all the people calling for greater education to dissolve racism, I’m not sure that’d work on him. It was who he was.

The picture is so confused and layered in terms of resolving this issue. My first two interviewees both felt that some people chant racist things at the game because they know it’s not allowed and thus is attractively transgressive, but they’re not doing it because they are actually racist. Not that it makes it any less wrong, obviously. They also suggested others enjoy the special attention it brings them – which hints at other dysfunctions – and yet others might be just going along with it so as not to look soft to harder, genuinely racist, mates.

As the report in the Guardian shows, there are still plenty who are just like the man I met: hardcore racists. I really don’t see how we deal with him. Later I got in touch with my first two interviewees again just to update them on the writing of the book.

“How do you think we should stop all this happening?” I asked the first. “What should the clubs do? What should society do?”

The first was in no doubt.

“I’ll tell you what needs doing. It would’ve stopped me back when I was a daft lad. And it’d work now.”

“Give the bastards an absolute caning. Hit ‘em hard. We’re too soft on them. If you’re caught on CCTV chanting racist abuse or anything like it, you get put inside for a year. Mandatory. No questions. They take you out the ground and put you in jail that afternoon. Just like that. And if the coppers want to get a dig in along the way, then so much the better. It’d scare all the silly pricks like me. Banning them from the ground for life is nowt. I don’t know if that even works. Don’t they just grow a beard and get a mate to buy them a ticket?

“Alright, some of the hard nuts won’t change. You’ll always have them. That fella you met, the racist, he’s not going to change, we just take him out and put him away for a long time. The real bastards are few and far between, the rest who are doing it are just hangers on. If you come down hard on them, you’ll stop it.”

The other chap had a more creative idea.

“The one thing I’d have hated more than anything would have been my mam seeing what I was doing. She’d have given us such a hiding and I heard, in Brazil I think it is, that they have middle-aged women as stewards. The idea is that you don’t misbehave if someone who looks like your mam, or actually is your mam is standing in front of you. I dunno, might be worth a try.”

Maybe both are right. It doesn’t address the racism that happens in the my-word-against-your-word situations highlighted in the Guardian piece, of course. Either way, it’s depressing to think we still haven’t got beyond this as a society and it doesn’t look like we will any time soon.