The Colombian has played just 13 times for Los Blancos this season, not helped by injury issues. 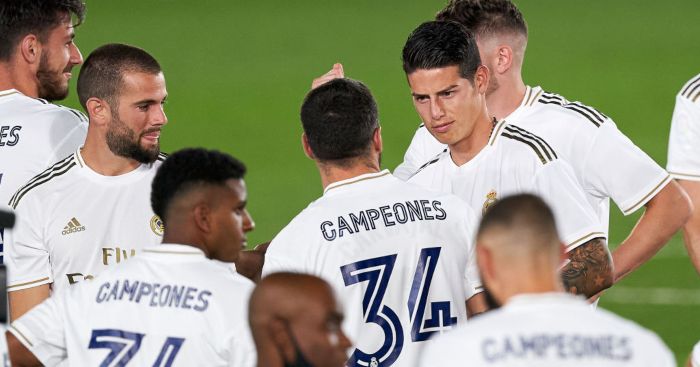 Premier League side Everton are progressing well in talks to sign James Rodriguez from Real Madrid, according to reports.

He was linked with a move to Man Utd in April with Real president Florentino Perez reportedly willing accept ‘less than €30m (£26m)’ for Rodriguez.

Another report claimed in early June that the Red Devils were ‘willing to make an effort’ to capture Rodriguez with the player having the ‘upper hand’ on Real due to his contract expiring next summer.

However, those links have gone quiet recently and it now seems like Everton are set to win the race for Rodriguez.

The Daily Telegraph claims that the Toffees are ‘in talks to sign James Rodriguez on a permanent transfer’ in a deal that would represent a ‘significant coup’ for Everton.

Rodriguez was a favourite of Ancelotti’s during his time as manager of Real Madrid and Bayern Munich and now it looks like he could have the chance to coach him for a third time.

Real are looking to sell him in this transfer window, rather than look to loan him out again, with the Colombian only having a year left on his contract.

The Telegraph adds: ‘It is not yet clear what kind of fee Real Madrid will demand for James – if any – given they are keen to remove him from their wage bill. It is understood that negotiations, according to a source, are going well and are advantageous to both clubs.’

The Toffees ‘are the clear favourites’ with the Merseysiders ‘hopeful of signing him in the coming days’.