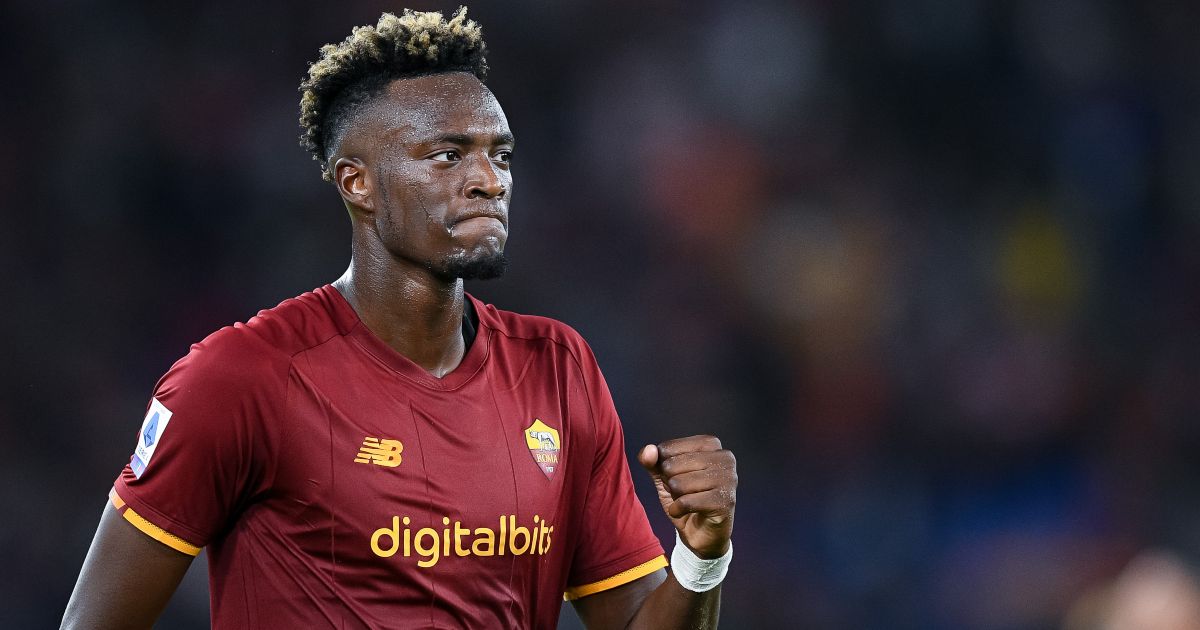 England striker Tammy Abraham is loving life under Jose Mourinho after answering the Roma manager’s call to spurn Premier League interest for a fresh start in the Italian sunshine.

The 24-year-old this summer became the latest English talent to head abroad as a lack of opportunities under Thomas Tuchel saw him bring down the curtain down on his long association with Chelsea.

Abraham scored a hat-trick in what proved to be Frank Lampard’s final match in January and only played seven more times for the Blues, with the striker left out of the victorious Champions League final squad.

Abraham subsequently swapped Stamford Bridge for the Stadio Olimpico in search of game time, joining Roma in a £34million deal and scoring four goals in his first 10 matches under Mourinho.

He said: “Why Italy? Good question. I had different options. So many clubs I was speaking to at the time. Italy came and I spoke to Jose. He had a goal.

Abraham said when Mourinho “speaks you listen”, with the striker learning a lot from the former Chelsea boss after listening to his successful sales pitch.

“The first thing he said to me was when I picked up the phone he was like ‘do you want to enjoy some sun or stay in the rain?’ I laughed,” he said with a smile.

“I think at first I did not think much of it when we were speaking. I think my mindset was that I wanted to be in the Premier League and I wanted to stay here.

“I feel like it was home, being around London, being around England. It was home. And I think I had to open my wings a bit and make a choice and I chose Italy and would not change it.

“I have learned so much tactically – as much as I have in my entire lifetime. It is good. You need to learn off different managers. Right now I am learning a lot.”

Abraham is enjoying the limelight Mourinho told him to expect in the Italian capital, plus the chance to learn a language, experience a different culture and visit new places.

The 24-year-old says he loves learning but sometimes that has been through adversity this year, admitting he “didn’t really understand” why he did not get more opportunities under Tuchel.

“I think the easy option would’ve been to stick around and sit down,” Abraham said.

“Chelsea’s a massive club, they will compete and try to win trophies so the easy option would’ve been to do that.

“I realised that I needed to go out and prove myself, I needed to play some games. I took a decision and it was the right one.

“I think at first it’s quite tough to deal with. You’ve gone from playing regularly to not being in the mix and not even making the bench sometimes. I got to a point where I had to sit down and talk to myself. I was going out to train and I was doing it for me.

“I was going to train to better myself because it’s easy to throw a strop, to be angry around the place, to be a bad egg.

“For me, it was the opposite. I learned about myself and I think that strengthened my mindset. I was with the team whenever they needed me.

“Players like Mason (Mount), Reece James, Callum Hudson-Odoi – the players that are younger than me, I kind of had to lift them and be their support, help them and encourage them.

“At the end of the day, we won trophies as a team so I have to thank them for that.”

Abraham said that spell made him appreciate there will be low moments during a career that is back on an upward trajectory, which has led to his return to the England set-up.

The 24-year-old was involved in a Covid-19 breach last October and his last Three Lions appearance came the following month, meaning he ended up watching Euro 2020 from afar.

But Abraham is focused on the future and grabbing this opportunity, having been left off the initial squad list for the World Cup qualifiers against Andorra and Hungary.

“It was a surprise to me,” the six-cap striker said.

“I woke up to a call from Gareth and I was still half asleep and when I answered he spoke to me and what he said was at first he could not guarantee me games as there were only two games but he found a way and brought me in.

“I am always delighted to play for my country.”