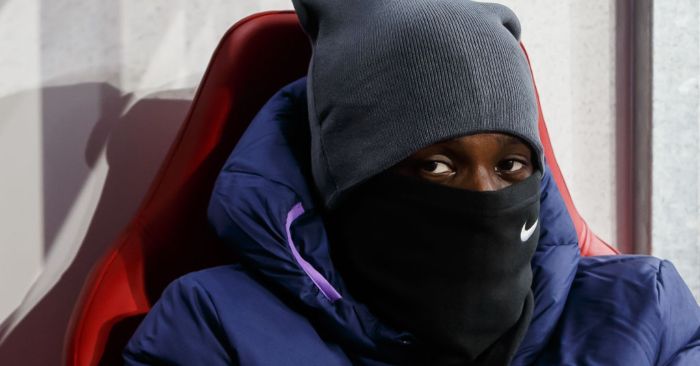 Tanguy Ndombele might face a terminal situation at Tottenham. Not because his levels of performance or fitness haven’t been anything close to adequate, or even because his relationship with Jose Mourinho already appears so sour and adversarial. Instead, it’s because there’s no sense that he’s going to have to fight for his career.

On Friday, reports emerged linking him with a move to Barcelona. By all accounts, the Catalan club lack the budget to sign him outright and, instead, would offer a tranche of first-team players to Spurs in part-exchange.

The veracity of those stories is irrelevant. That it’s believable is really all that matters, because it perfectly describes Ndombele’s place in the global footballing hierarchy. It also demonstrates that – incredibly – nothing has happened in England to this point to harm his reputation in any way.

In fact, if Barcelona’s interest is to be believed, then it shows the footballing community believes this to be a situation of Tottenham and Mourinho’s making, rather than an issue with the player’s attitude. And whatever the rights and wrongs of those assumptions may be, it’s not a situation likely to inspire much short-term improvement in the player.

It’s the opposite actually. It neuters Mourinho’s authority and changes the dynamic of his relationship with the midfielder. On the basis of just how regularly exclusive information about Ndombele appears in the French press, their marriage may have been bound for divorce regardless. Even so, it makes a difficult situation far harder.

It’s one of the difficulties in dealing with extremely gifted players. More so the problem with those who possess unusual talent and who the game deems to be scarce. Ability encourages indulgence. In that vein, Barcelona – or any clubs interested in Ndombele – presumably see his imperfections for what they are, but reason that they can be the ones to correct them.

As Tottenham presumably did. Dig into accounts of the player’s youth career, or even his early months on loan at Lyon, and the same themes reappear. He’s described as complacent and indifferent and it’s suggested that, perhaps, the game has always come a little bit too easily to him.

No problem, Steve Hitchen and Mauricio Pochettino likely thought, because his talent makes Ndombele worth the gamble and, besides, the importance of a player applying himself properly after a £60m transfer is self-evident. The Premier League is a different kind of challenge to Ligue Un, they would have assumed, and it will provoke a reaction.

And you can imagine a club like Barcelona thinking in exactly the same way. They might, for instance, presume that any player would be enlivened by the prospect of playing in Camp Nou. Or take the attitude that, well, it’s Tottenham, and representing Barcelona would be an entirely different proposition, and one strong enough to burn away any indifference.

They might even be right. Nevertheless, such a mindset clearly represents a cultural and problematic challenge to the notion of meritocracy. Players are supposed to earn their way up the food chain, not default from club to club on some abstract basis of what they might one day become.

Yet that’s exactly the scenario that might be unfolding here.

It’s still important not to make assumptions. The root cause of Ndombele’s poor performance is still unknown, we’re all just guessing at it, and it might be that there are several issues – physical, personal and professional – contributing to this failure of his to adapt.

The overarching concern is the same, though. If his desirability to clubs at the very top of the game is undimmed, then how can he be compelled to make his time at Tottenham a success? If a move to Spain was always part of his plan and he is in fact now being offered that opportunity despite eight months of desperate, listless failure, what is the comeback for Spurs or Mourinho?

There’s no angle. There’s no lever to pull or button to press. There’s no way of pushing him towards any sort of short-term redemption. His talent is so significant, so obvious and so unusual, that the normal laws don’t really apply to him at all.

In a way, he’s Adel Taarabt. There are some key differences between the two – obviously – but there are still parallels that fans will recognise in this specific frustration. Taarabt always seemed to assume he was headed for the game’s stratosphere and those around him evidently did little to discourage that assumption. In his mind, it seemed, his failure to become a first-team regular at White Hart Lane was about everyone but himself – it was Harry Redknapp’s fault for not accommodating him properly, or for not recognising his ability for the commodity it was.

In that situation the talent was real. Taarabt could have been an extraordinary footballer. Unfortunately for him, it was still too theoretical to outweigh the other concerns – there was too much to fix – and, while he has started to stir at Benfica, it has taken until his late twenties for him to realise that his career was sliding out of view.

The challenge with Ndombele, though, is arguably worse. Barcelona aren’t just an option in his own mind, they are reportedly an actual suitor and, as a result, constitute a further layer of resistance that Mourinho and Tottenham will have to penetrate.

Once football is released from its suspension, this will continue to be a bewildering conundrum.