Home F365 Says Even Mourinho now has to love this Ndombele… 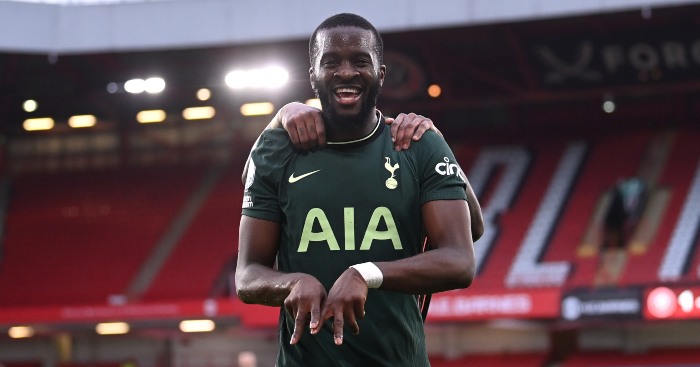 Tanguy Ndombele did three remarkable things in Spurs’ 3-1 win at Sheffield United on Sunday. One was a very saucy outside-of-the-boot pass to Serge Aurier in the first half. Another was a quite ridiculous goal made all the more remarkable by the fact that nobody (apart from Graeme Souness at his most determinedly joyless) could doubt it was entirely intended despite the preposterous angles and parabolas involved. Third, and perhaps most remarkably of all, he completed the full 90 minutes of a Premier League football match.

It’s only the fourth time he’s managed that particular feat, and the first since late 2019. Jose Mourinho has had plenty to say about Ndombele’s fitness and conditioning but, with those issues now seemingly behind them both, even Jose has allowed himself to be won over by the decidedly un-Mourinho charms of the French midfielder.

He is nothing like a Mourinho player. He lacks the consistency of a Kane or a Son. Players who even on an off-day – Son had a second straight one of those in this game and does look extremely weary – provide a baseline level of competence and reliability. Even well short of his best, Son contributed an assist and created a late chance that Kane really should have scored. Kane had an absolute Kane of a game right down to scoring a goal that was as thoroughly Kane as Ndombele’s was undeniably Ndombele.

From this angle, with the outside of his boot. Tanguy Ndombele is balling for #THFC pic.twitter.com/EejAjf4INx

What Ndombele has started doing now, though, is getting himself fit enough and adapting his game just far enough to make it tolerable for Mourinho. It was a heady mix in this game, in which Ndombele roamed the midfield with that strange run of his, at the same time awkward yet smooth, robotic yet fluid, and picking out daft passes and in the end truly outrageous finishes. He is a player who does things of which others could not even conceive and elevates this Tottenham side with his presence.

While it’s true that a great deal of the praise Mourinho now routinely dishes out to Ndombele exists primarily to subtweet Dele Alli, it’s a remarkable and noteworthy transformation in 10 months since being hauled off in disgrace at Burnley after 45 minutes just before football stopped altogether.

It’s also necessary to be very careful about drawing any exaggerated conclusions from Sunday. Sheffield United are rubbish and yet there were still enough hints at 1-0 and when McGoldrick briefly halved the deficit in the second half that Spurs retain their ability to make life unnecessarily hard for themselves, but this was an eye-catching display with Spurs far readier to play on the front foot and to their conspicuous strengths rather than trying desperately to cover their weaknesses. Only very occasionally did an enterprising back three revert to a stodgy and negative back five. This was far more of a 3-5-2 than the 5-2-2-1 it threatened to be, and as such looks like a formidable way to get the best out of the resources Mourinho has available.

That’s not always been a strength of Mourinho’s, but there can be little doubt that this is a formation that puts several very talented round pegs in round holes. We’d very much like to see more of it. Mourinho has the enormous and singular advantage of not having to worry too much about Kane and Son, two players who combine elite brilliance with a team-first attitude that any manager would love and means they can largely be left to get on with it. Behind them, though, Spurs are more of a mixed bag and this is a formation that will likely be seen again.

As with England, three centre-backs provides a bit of insurance against the fact that no entirely reliable and trustworthy central two exists. Eric Dier is still doing just about okay, Joe Rodon looks a truly excellent young defender providing the necessary pace of Davinson Sanchez without the propensity for catastrophe and all while looking far more comfortable on the ball. Ben Davies is solid on the left of a three and happy enough to shuttle across should the need arise. In Pierre-Emile Hojbjerg, Spurs also possess a midfielder well suited to dropping in and turning a three into a four if and when the wing-backs – and in Sergio Reguilon, Serge Aurier and Matt Doherty, Spurs possess three players very happy in those roles – ever be stranded further forward.

But on Sunday’s evidence the biggest benefit of a third centre-back is the ensuing freedom granted to Ndombele. Again, the opposition is a notable caveat, but even before a quite outrageous goal this was his best performance in a Spurs shirt. He both thrived on the responsibility in a central midfield two while also revelling in the times the presence of three centre-backs and the redoubtable Hojbjerg allowed him to be more true to himself.