Home All The News Tank Kolasinac ‘outstanding’ out of position – Wenger 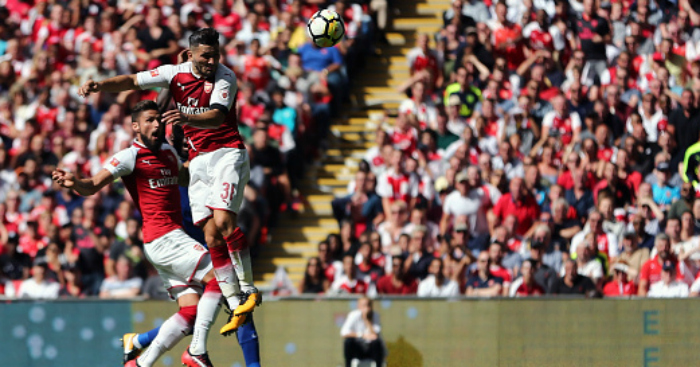 Arsenal manager Arsene Wenger had plenty of praise for new signing Sead Kolasinac, as he came off the bench to score the equaliser in the Gunners’ Community Shield triumph.

Victor Moses had given Chelsea the lead just after half-time, but when referee Bobby Madley sent Pedro off on 80 minutes, it took Kolasinac only two more minutes to level the game.

The match went straight to penalties, a first opportunity for the ABBA format to come in to play, and after Thibaut Courtois and Alvaro Morata missed, Olivier Giroud dispatched the winning penalty.

“He’s normally a fullback,” Wenger said of Kolasinac. “I had hesitation to start him because of the pressure. When he came on he was outstanding.

“He’s physically very strong. We have players pumped up in the gym and players who are born strong.”

Wenger believes Mertesacker will be fit for Friday’s Premier League opener against Leicester after suffering a cut head when caught by an accidental elbow from Gary Cahill – and was delighted with his side’s performance.

“We put ourselves in a difficult position just after half-time, but in the end we produced a performance that we did at the end of last season,” the Frenchman said.

“We were dominating (at the time of Pedro’s dismissal) and I just wondered whether we would come back or not. But I think we always looked dangerous.”

The Gunners manager had praise for another new boy, Alexandre Lacazette, too: “Lacazette is getting better every week.”