Home Mediawatch Tarkowski in, Rashford out at Manchester United?

Manchester United guff does not stop for international week. But first, some England miserablism. 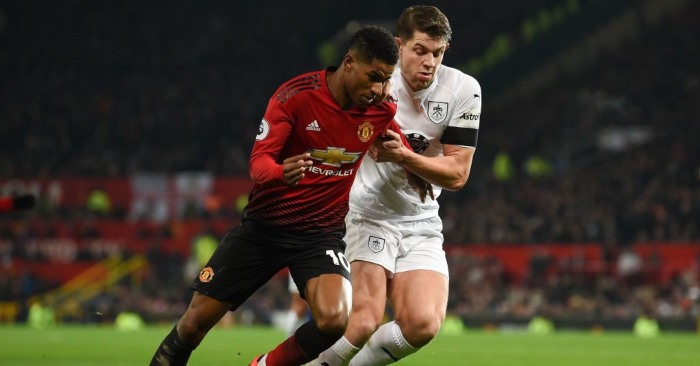 The Sun‘s Dave Kidd describes England as pretty much exactly what they are: ‘A decent team with an outside chance of winning next year’s Euros.’ As he points out, there is ‘merit in their bloody-mindedness’, eking out a victory after being humbled by Belgium in the opening half-hour.

His colleague Charlie Wyett wrote that Southgate’s ‘team fought hard and found a way to win. For that, you have to give them real credit’. Yes. Unless of course you are in the business of sweeping up all the clicks.

Remind yourself that England have just beaten Belgium – previously unbeaten in two years and top of the FIFA world rankings – as you read the comment piece on The Sun website headlined ‘England have little chance of winning Euros if Gareth Southgate wastes the attacking talent with his defensive mindset’.

They have just beaten Belgium, fellas.

‘An in-form Dele Alli, Callum Hudson-Odoi and James Maddison could also challenge for an appearance.’

Well done for naming 12 attacking English players, five of which were basically unavailable and three of whom are nowhere near contention because of poor form or fitness. Of the four that remain (including one picked as a wing-back option), Southgate chose two. And – this seems important – won the game.

‘But it was only Mount, who was playing in an unfavoured wide position, Rashford and Dominic Calvert-Lewin supplying the creativity against Belgium.’

Well, nobody has created more chances for England in this Nations League campaign than wing-back Kieran Trippier because – and this might blow your mind – ‘defenders’ are allowed to create in modern football. Mental, right?

‘Playing both Rice and Henderson is a mistake. They are too similar and are stifling England’s attack.’

They are ‘similar’ in that they both play in central midfield. But Henderson was probably England’s most dangerous attacking player in the first half and he did actually win England a penalty. In their actual win.

‘After 72 minutes, England had registered just three shots on target.’

‘The game was crying out for Grealish to come on in midfield and push England higher up the pitch.

‘Instead, it was Leeds’ Phillips who was the man introduced to replace Henderson.’

Seriously, stop watching football if you think that the appropriate reaction to being 2-1 up against the best-ranked team in world football is to bring on a more attacking player.

England do ‘have little chance of winning Euros’ but we can give you five good reasons before we get to Southgate’s reluctance to play Jack bloody Grealish.

You might think the transfer window is closed but you would be a fool if you thought that would mean a lack of LIVE transfer updates.

And the Mirror bring us this on Monday morning:

Note the present tense on that Tarkowski claim. And then let’s go back to the source of that LIVE transfer claim:

The Athletic. On Thursday. Four whole days ago. And this is the sum total of the James Tarkowski talk, 2250 words into a very, very long read on the situation at Manchester United:

‘United are understood to have been made aware that a transfer could be brokered for Burnley’s James Tarkowski and the club explored the feasibility of transfers for RB Leipzig’s Dayot Upamecano and Napoli’s Kalidou Koulibaly.’

They were ‘made aware that a transfer could be brokered for Burnley’s James Tarkowski’. It does not even say that United were interested, just that they were told that Tarkowski was available. Indeed, it actually suggests that United were not interested at all; they probably never even ‘eyed’ and are certainly not ‘eyeing’ now.

And yet the Mirror are not the only outlet to turn that morsel into a massive meal.

All use the present tense and all are happy to suggest that James Tarkowski is an ongoing Manchester United target despite their source saying only that ‘United are understood to have been made aware that a transfer could be brokered for Burnley’s James Tarkowski’. Literally just that.

But why let that (or indeed anything) get in the way of delicious Manchester United transfer clicks? Nom nom.

‘What players such as Marcus Rashford must do now is ensure that they don’t become casualties of United’s stasis.’

How? Ladyman is not quite ready to explain…

‘On the field, he still has some growing to do. And at clubs that lose their direction, things can start to get in the way.

‘That may seem an odd assertion given that Rashford is a regular starter for United and England. But as team-mates at club and international level such as Dele Alli and Jesse Lingard have shown, footballers must continue to move forwards if others are not to pass them by.’

‘Now he must ensure he is in the right place to resist that threat (from Jadon Sancho) when it inevitably presents itself again next summer.’

There’s a lot of ‘ensuring’ that needs to go on, but we’re not sure how. But then it becomes clear. Ish. Maybe.

‘Greenwood, happier on the right side, is what you may call a generational talent. The teenager is arguably the most exciting forward England have produced for a decade or more. Rashford does not have that degree of exceptional ability and, if he is to make the leap to the next stage, then he will need the very best coaching.

‘At United, life sometimes seems a little too easy for players. On Solskjaer’s team there are too many who fail to play with consistency. Coincidence? Unlikely.

‘With this in mind, it’s pertinent to suggest that while Rashford would not currently get into the teams at Manchester City or Liverpool, he may well do if he were to have a couple of years of working with Pep Guardiola or Jurgen Klopp behind him.

‘Young players need to take responsibility for their own direction of travel but equally they need to be led.

‘Rashford is hardly at a career crossroads, but it would be a shame were his potential to be smothered by another season of blind meandering at the country’s biggest football club.’

One thing: He might want to check that Liverpool or Manchester City actually want this player without ‘exceptional ability’ before he agitates to leave the blindly meandering club he loves.

Or have we got it all wrong and Ladyman is actually advocating that Rashford somehow gets rid of Ole Gunnar Solskjaer to ‘ensure’ he does not go the way of *checks notes* Jesse Lingard? It’s really, really difficult to tell.

Having anon of it

Ladyman also wants Pierre-Emerick Aubameyang to ‘remind us it wasn’t just £350,000 a week that made him stay’. Quite what he has to prove to the Daily Mail is unclear, but we have to question the notion that the Arsenal man has ‘contributed three anonymous performances’ since he signed; the Mail themselves gave him a MOTM 8/10 for his performance against West Ham, when he ‘anonymously’ created the opening goal of the game.

“I am leaving with a lot of desire to return one day,” says 18-year-old Facundo Pellestri after he secured a transfer to Manchester United from Penarol.

The Athletic on Project Big Picture