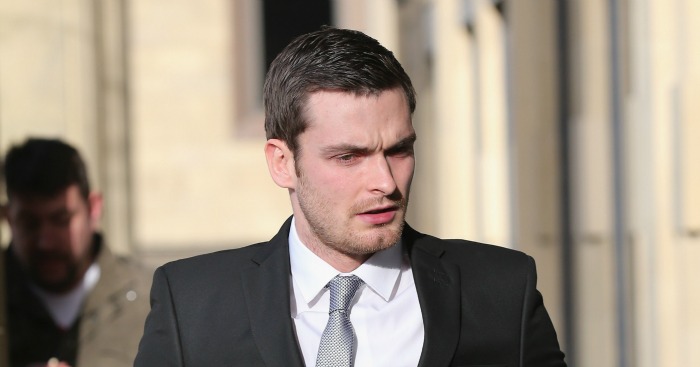 Former Sunderland footballer Adam Johnson has told a court that it was his father who received a phone call telling him his contract at the club had been terminated.

Giving evidence for the third day at Bradford Crown Court, the former £60,000-a-week winger and England player, who stands accused of sexual activity with a child, said he was to receive a “one or two-line” email from the club notifying him of their decision during his ongoing trial.

The 28-year-old added that, having pleaded guilty to one count of grooming and one count of sexual activity with a child relating to kissing a 15-year-old girl on the first day of his trial, his team mates had distanced themselves from him.

Johnson denies two further counts of sexual activity with a child after previously denying all four charges against him.

It is understood that players including Steven Fletcher had been due to give evidence on his behalf in the trial.

His barrister, Orlando Pownall QC, asked him: “Since you pleaded guilty how has their approach been to you?”

Johnson told jurors: “They took a step back.”

The court heard that Sunderland chief executive Margaret Byrne, Johnson, his barrister and the footballer’s father met for a conference on May 4 2015 where the footballer was to accept that he had kissed the 15-year-old girl and messages had been exchanged.

Mrs Byrne was also issued with a copy of his police interview transcript and that of his alleged victim.

Johnson told the trial that at the meeting there had been no mention of him being summarily dismissed or the potential consequences of admitting the charges.

Johnson replied to each question: “No.”

Mr Pownall asked if he had been present at any decision made by the club with regard to his future, but the footballer said he had not.

He told the court that his father was to receive a phone call telling him his contract was being ended.

Mr Pownall further asked: “Did you hold back your pleas for money?”

Earlier, in cross-examination, prosecutor Kate Blackwell QC said: “Some people may feel sorry for you because you have thrown away your glittering career. The position you are in now was a direct result of your excessive arrogance.”

Miss Blackwell said: “The position here is that, while you have a sense of shame, you have no sense of remorse, do you?”

The prosecutor asked: “When you told the police in interview that being arrested was the worst day of your life, that’s genuinely how you felt, wasn’t it?”

When asked by his barrister why, he replied: “Because I had been arrested for sexual activity with a child.”

The jury of eight women and four men has heard that Johnson met the girl twice in his black Range Rover after exchanging telephone numbers and messaging each other over a number of weeks.

Johnson denies that more serious sexual conduct took place between the pair in his car.

The court was told that, following the encounter with the girl on January 30 2015, Johnson texted her saying “It was class.”

Miss Blackwell said: “What was class?”

She added: “Mr Johnson, you were a man of 27, you were referring to more sexual activity than a kiss, weren’t you?”

The court was told that he was to go on to tell the girl “Just wanted to get your jeans off.”

The prosecution allege that the message had been in response to Johnson performing a sex act and the girls’ jeans being too tight.

A further text from him read “You felt very turned on.”

Miss Blackwell asked: “What happened in that car for you to realise that (she) was very turned on, Mr Johnson?”

He replied: “You don’t need to feel someone physically to know that they are turned on. I only kissed her. I accept I kissed her and I accept it was all my fault but I can’t accept the other two allegations that I haven’t done.”

He denied that he was going to meet the girl again despite telling her it would be “soon as I can”, telling jurors: “I knew in my head I wasn’t going to see her again, it was as simple as that.

“I knew what I did was wrong and also trying to keep her on my side in case she said things to people about us.”

The court heard that, while the messages were being exchanged, his partner, Stacey Flounders, had had sent him a picture of their daughter to which he said she looked “class”.

Miss Blackwell said: “That’s the same word that you used to describe the sexual encounter with (the girl), ‘It was class’, ‘She looks class’.”

He accepted that he had not been truthful to his partner and told the court “I wasn’t being a good person.”

The court heard that Miss Flounders had pleaded with him to try harder.

Miss Blackwell said: “Your response to Stacey was, ‘stop being paranoid’. She had every right to worry, didn’t she?

“The very thing that she feared was happening was taking place at that very minute.”

“You have been called arrogant. It has been suggested and you have agreed that you were being offensive to Stacey in some of those exchanges on January 30.

“It’s not about sympathy, but just tell the jury, this being your opportunity, what you now feel (towards the girl).”

Johnson replied: “I feel absolutely awful about what I did to everyone, but mainly (the girl).”

Choking back tears, he said: “I don’t show much emotion”.

He was asked if the sentiments were true, and he insisted: “Yes, they are true.”

“What do you feel about yourself?” Mr Pownall asked.

Earlier, the trial was told that Sunderland FC were to play Burnley FC on January 31 and Johnson’s name had been included on the squad list.

Johnson claims he could not have been with the girl for as long as is alleged because he would have been fined two weeks’ wages by the club if he was late.

Johnson said he had to be at the Stadium of Light for 6pm, with the coach departing at 6.30pm.

The court heard that a list of fines of up to £500 would be issued for late arrivals, with Judge Jonathan Rose pointing out that it also included a £500 fine for wearing a hat at the dinner table.