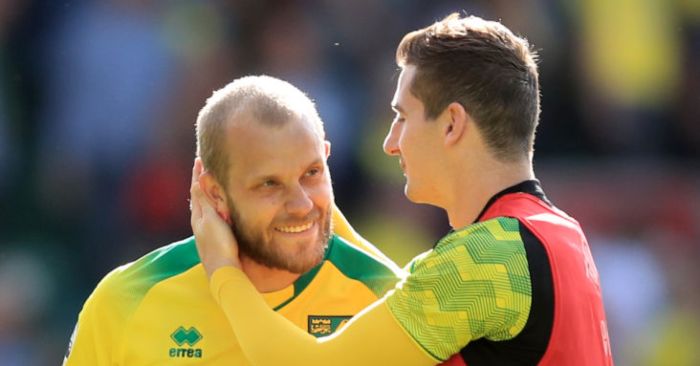 Who’s this week’s hero, Johnny?
This week’s hero is in many ways an unlikely one. At 29 he’s approaching the autumn of his career having promised to be an excellent striker a couple of times without ever actually fulfilling that potential – until now

A Finnish fella who started his career at KTP with an unimpressive three goals in 29 games, who nonetheless moved on to Sevilla’s reserve team for £1.3 million – a Finnish record at the time – but bagged just three in 17 and only played once for the first team.

HJK Helsinki took him from Spain and here he had his first sniff of success, netting 18 times in 34 games and winning the Finnish Cup and the Veikkausliiga double. This got him a very good move to Schalke, against whom he’d scored twice in a Europa League qualifier. Despite being a fan favourite, in three seasons and 47 games he only scored eight. Surprisingly, this made him good enough for Celtic to swoop and he scored on his debut against Hearts.

But the boy just couldn’t keep any consistent form going. “He had the qualities we wanted but he would maybe say he never got the chance to show that on a consistent basis,” said Neil Lennon at the time. He notched nine in 37 and picked up a league winner’s medal in the process, then was shipped out on loan to Brondby.

“Physically I was not strong enough to play at Celtic and I know myself it was not my best time as a football player, for sure,” he later said. But Mixu Paatelainen, his national coach, felt he’d been got rid of far too quickly.

Suddenly he got quite handy, the loan became a £500,000 transfer and in 2016/17 Brondby won the Danish Superliga with Pukki finding the net 29 times in 46 games in all competitions, contributing ten assists too. Pukki Power had arrived: across four seasons he struck 69 goals in 161 games.

From there he signed for Norwich City in a three-year deal and became an East Anglian hero. That’ll be Teemu Pukki, then.

What have they done to deserve this then?
Norwich took him on a free transfer at the start of last season, at which point, incredibly, he became a goal machine. He now has 34 in 48 games for them. He was named EFL Championship Player of the Season, Norwich Player of the Season by the supporters and received the Barry Butler Memorial Trophy last season. He was top scorer in the Championship, too.

Now promoted to the Premier League, many thought he might struggle, but not a bit of it. Scoring the Canaries’ only goal against Liverpool on the opening day and then last weekend demolishing Newcastle United with a hat-trick, he sits atop the goalscoring charts already. What’s more, he’s scored eight in his last 12 international games for Finland. He can’t stop scoring. Now 29, his success has been a long time coming.

Teemu Eino Antero Pukki to give him his full name (Pukki means goat in Finnish), looks like a bit of a throwback really. Not the uber-groomed fashion model or lithe panther of a man that has become so commonplace. It’s easy to imagine him playing in the mid-90s, somehow. He just doesn’t look like the modern player who tends to have the physique of a middle distance runner. Pukki looks more regular, more weathered. At just under six foot, he doesn’t score headers; it’s all on the deck for him. He has become a tremendous finisher. This seems to have come to him when pushed further forward by his manager last season. His game is based on hard work, having just enough pace to pounce onto through balls, and above all, quick, fast, efficient, often one-touch shooting.

The late developer used to be A Thing. Players who somehow never found their right position or club until well into their 20s, but these days with prospects getting hoovered into academies at an early age, being burned out by their mid-20s is more usual. That’s another thing that makes Pukki stand out from the crowd.

He obviously was seen to have potential at a young age, having made his international debut in 2009 when just 18 and winning Finland’s Young Footballer of the Year award.

Daniel Farke says Pukki was a “good fit to our ideas…a technical player with really smart movements. We were speaking about how we need to make more runs in-behind and runs from deep and he’s a player who has the smart movements.”

Watching every one of his goals for Norwich, a few things become clear. He shoots for the corner or side netting of the goal with great accuracy, often striking hard and low. He also scores a lot without even taking a touch to control the ball, being fed through and striking it first time. And he can volley the ball with the best of them. That lash against Newcastle was perfectly timed and with effortless technique.

Obviously, he’s become a folk hero at Norwich because of these goalscoring exploits but also because it was unexpected. Few knew much about him when he arrived and perhaps that makes the goal glut even more enjoyable. The fact he came on a free, just adds some economic icing on the Pukki-shaped cake.

Media reaction?
Being called Pukki is a bit of a blessing for our media which is obsessed with alliteration and anything that sounds like a bodily function. Pukki Power and Perfect Pukki have all been headlines. Of course, as the popular press largely ignores the lower leagues in favour of generating headlines about Manchester United and Liverpool by literally filling pages and pages with vapid, content-free, inaccurate or outright fictional nonsense, largely to just manufacture a URL that will attract traffic, albeit inevitably disappointed traffic, this means that Norwich’s heroics last year didn’t always get the coverage that it deserved in the mainstream media. But now he’s in the not-really-premier Premier League, they’re at last paying attention. And let’s face it, just saying ‘Pukki’ is a lot of fun.

Anyone grumpy about it?
Ipswich Town fans.

What the people say
The vibe from those who appreciate Teemu’s talents seems partly rooted in the fact that he seems to be a normal fella and not some sort of tinted-windows prima donna with an entourage of unbearables telling him which coconut water to endorse. This is really, really important in today’s game. We crave connection but are all too often kept at arm’s length by big money and bad attitude.

‘The fact that he doesn’t look like a footballer and looks more like a farm labourer that has been given a game somehow makes him even more endearing. He wasn’t even bought to be our main striker. He was bought to come in off the wings to support the lone striker Jordan Rhodes but the system was changed shortly after the start of the season when it was obvious it wasn’t working with Pukki going up top and he’s never looked back.’

‘Intelligent movement, deceptively quick and sublime finisher – especially his habit last season of scoring with just one touch. He’s obviously matured a lot over the years as a player, learnt something from each country he has played in. Fits Farke’s style perfectly. Nice guy.’

‘Gave my third child the middle name Teemu. Admittedly it was after ice hockey player @TeemuSel8nne but I’m glad that he’s leading a renaissance in the acceptability of the name.’

‘The first time my friend’s girlfriend went to a football match she said “I like him, he looks like a builder.”‘

‘At Villa Park last season he came over to collect the ball for a throw-in, a guy nearby started shouting ‘Pukki’ to which he stopped and looked in the guys direction, to which the guy responded ‘Wanker!’, Pukki to his credit had a chuckle at this and carried on. Top man.’

‘Did you know his nickname is ‘Shefki’ as his favourite player growing up was fellow Finn Shefki Kuqi, upon who he modelled his game?’

‘Ice cool in front of goal. Reminds me of a fit Michael Owen in some ways, seems to find the spaces. Doesn’t panic, would rather hit the target than try to blast it. Love him!’

‘My personal favourite thing about him is that his interior-designer wife will only allow those of his trophies which match the neutral colour scheme to be on display, the rest go in a drawer! Woman after my own heart.’

‘As a Palace fan, I get strong Glenn Murray vibes off him. Journeyman who’s spent an entire career picking up all the tricks of the trade before putting it into action on the big stage. An Indian summer of a career.’

‘The ultimate team player, you’ll never see anyone work harder with less fuss (see 60-yard run to breakup a Newcastle attack on Saturday as a great example). Took his hat-trick match ball home to give to his daughter to play with. Almost seems embarrassed at the fuss being made of him at times.’

‘Somehow manages to provide the link up play of a modern forward whilst playing like a “proper striker”. Comparable movement off-the-wall to Sterling, despite having about half of the pace.’

‘Actively engaged with fans who wanted to celebrate the promotion with him and the team – didn’t hide behind the velvet rope. Understood that promotions are not things achieved just by players but by a whole club and community, fans front and centre. Favourite Norwich player ever.’

What does the future hold?
It is a really unusual situation to unearth a prolific striker late in his career. If he tops the goalscoring lists in the Premier League this year, by the end of the season he’ll be 30 and thus probably too old to be of interest to bigger clubs. This is great for Norwich because they’ll be able to keep their striker and, in doing so, they stand a good chance of survival in the top flight, or even if relegated, they have a man they know can score a serious amount of goals in another promotion push. It seems to be the perfect club for him: small enough to care, but big enough to compete.

All seems set for Pukki to become something of a legend in East Anglia. His is a heartwarming story because it came out of the blue and a player who suddenly came good over ten years into his career is just so unusual. He is living proof that life can change for the better at any time and an example to us all not to give up. Cheers, Pukki. Let’s be ‘avin’ you!