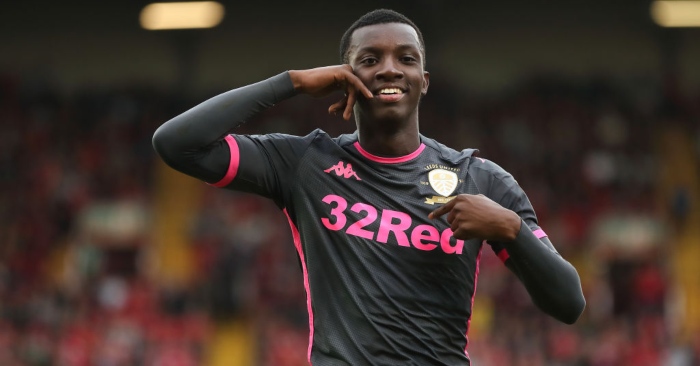 10) Matt Miazga – Reading (on loan from Chelsea)
This season is not centre-back Miazga’s first Reading rodeo. Having first joined the Royals midway through the 2018/19 campaign, the United States international played a pivotal role in securing Championship football for the current campaign.

In this new campaign, Miazga’s importance is being proven by his absence from the first team as opposed to what he is actual doing on the pitch. Since the 24-year-old sustained an opening month injury, the Royals have lost three straight league games. His near-return will be most welcome as Reading look to battle relegation once more.

9) Ivan Cavaleiro – Fulham (on loan from Wolves)
Portugese winger Cavaleiro is one part of a dynamic front three and one half of the pair on loan from the Premier League (more on the other to come) in this corner of west London. Courted by a number of Championship promotion fighters in the close season after being deemed surplus to requirements at Molineux, the Portugal international has been largely frustrating but equally magical in spells for Scott Parker’s side.

As part of a front three as potent and skilful as many a Premier League front-line, Cavaleiro’s August wonder strike at Huddersfield Town epitomised everything the man with previous Championship promotion experience is about.

Man of the match Ivan Cavaleiro doing his thing for Fulham with a lovely winner at Huddersfield tonight #wwfc pic.twitter.com/rOCtYhSqo6

8) Conor Gallagher – Charlton Athletic (on loan from Chelsea)
Chelsea may have used youth in abundance during their surprisingly un-disastrous start to the season, but there is still room for some of the new guard to shine in the Championship. Few outside of Stamford Bridge had heard of the 19-year-old midfielder before this summer, but he is hot on the lips of most Charlton supporters after a scintillating start to his senior career.

The England Under-20 international had never played senior football before his temporary switch across the capital, but he has been punishing second-tier defences for fun in the opening months of the campaign, scoring three and assisting two in eight appearances so far for one of the early-season surprise packages.

If he carries on like this, perhaps next season he will be another youngster forcing his way into the Blues side.

First month of senior football = Young Player of the Month!

7) Harry Arter – Fulham (on loan from Bournemouth)
Loan spells from the Premier League to the second tier used to be almost exclusively for young players looking to garner first-team experience or advertise their qualities to sides lower down the pecking order than their parent clubs. Tenacious and experienced midfielder Arter is synonymous with how much the loan market has changed in recent years.

Over 200 appearances for Bournemouth and a rise through the divisions has led to loan spells with Cardiff City and now Fulham. The 29-year-old’s first season outside the Premier League in half a decade could prove to be a brief sojourn if his impressive performances in the centre of the park continue enough to earn Fulham an immediate return to the top flight and a permanent contract for the Ireland international.

6) Christian Walton – Blackburn Rovers (on loan from Brighton and Hove Albion)
Former England Under-21 goalkeeper Walton has been on Brighton’s books since 2013, but he has made just three league appearances for the Seagulls. That is fewer than half the number of clubs he has appeared for since a 2015 switch to Bury.

This time around, Walton is competing in the Championship with Blackburn Rovers and has made a stellar start in the second tier. Four clean sheets in five games have helped the 23-year-old to become a fan favourite at Ewood Park, more than making up for the loss of David Raya to Brentford. Whether Walton will get a chance in the Brighton first-team squad remains to be seen, but he has earned his blue and white stripes.

Further confirmation today that Christian Walton is an upgrade on David Raya.

Commanding when called upon and very athletic in the time of need. #Rovers

5) Grady Diangana – West Bromwich Albion (on loan from West Ham United)
It speaks volumes about the positivity and depth in quality of England’s youth that a good handful of players on this list are or have been England youth players, and there are more to come. Diangana is without a doubt one of the most exciting and his loan spell at West Brom this season has showcased his talents to a wider audience.

Last season, the Baggies’ momentum was somewhat knocked by Harvey Barnes’ recall to parent club Leicester City and there is every chance West Ham may do the same with the DR Congo-born midfielder if he continues his superb form in the Midlands. Two debut goals at Luton Town were just the start, and Diangana has been impressing ever since.

4) Anthony Knockaert – Fulham (on loan from Brighton and Hove Albion)
The final piece in the Fulham loan jigsaw and unsurprisingly the most impressive so far. Many questioned Brighton’s willingness to let the Frenchman leave, but Knockaert’s impact is much greater in the Championship than the top flight. He is almost like a silky European Cameron Jerome.

But that shouldn’t neglect the fact that the former Leicester City winger is too good for most, if not all, Championship full-backs to contend with. Two goals in eight appearances is easy to scoff at, but watch the 27-year-old in any 90-minute performance and you will see why he ranks so high up this list.

3) Ben White – Leeds United (on loan from Brighton and Hove Albion)
When commissioned with creating this article, it never crossed my mind that Brighton would appear not once, not twice, but thrice in loaning out star EFL players. Given they are without a victory since the opening day of the Premier League campaign, perhaps Graham Potter could do with the likes of Knockaert, Walton and White in his current roster.

White is one of the surprise names on this list. Loan spells at Newport County and Peterborough United in recent years have been solid if not stellar, but this season the jump up to the Championship has seen the 21-year-old become one of the stellar defenders in the division. White has been a near-constant shield in four clean sheet appearances, so much so that he was voted Championship Player of the Month for August.

Ben White is magic
He wears a magic hat
And if you threw a brick at him..

He’d probably take it down on his chest, pirouette around three players and spray a 40 yard pass out to kiko on the wing.

2) Eddie Nketiah – Leeds United (on loan from Arsenal)
He may not have played as much as most of the other players on this list. He may not have scored as many as others, and he may have got more game time if he had stayed at parent club Arsenal, but 19-year-old striker Nketiah is proving himself to be the one of the Championship leaders’ most vital players.

A perennial figure on the bench and coming on when it matters, I wrote this in early September:

‘You would be similarly hard pressed to find a player capable of scoring more crucial goals than young forward and Arsenal loanee Eddie Nketiah this campaign. Whether or not he will ever dislodge Patrick Bamford of his starting role up front on a regular basis is another matter, but the England Under-21 striker’s penchant for scoring goals from between six and 12 yards out is a delight to behold. The lad has talent, and there is no better place for him right now than the Leeds bench for an hour and the green, green grass when it matters.’

Nothing has changed since.

Eddie Nketiah is a better center forward than Marcus Rashford.

1) Jordan Hugill – Queens Park Rangers (on loan from West Ham United)
Hugill’s career is something of an enigma and it is only right that after a couple of years ranging from disastrous to mediocre, the striker is now one of the Championship’s hottest properties.

A largely nomadic opening few years to the game included spells at the likes of Seaham Red Star and Jerez Industrial. Even the striker’s 2014 move to Preston North End struggled to pay dividends with just three goals in his first 32 games for the Lilywhites before a season and a half of scoring for fun led to one of most misinformed Premier League moves of all time.

Hugill was never the man to end West Ham’s striker hoodoo and a so-so loan spell at hometown club Middlesbrough last season resulted in a mere six-goal return. Few expected much of this season’s loan switch to the Championship’s surprise dark horses, but he is more at home than ever with five goals from six games with Mark Warburton’s side fourth in the table after as many wins in a row. Hugill has played one of the biggest parts in that surge.