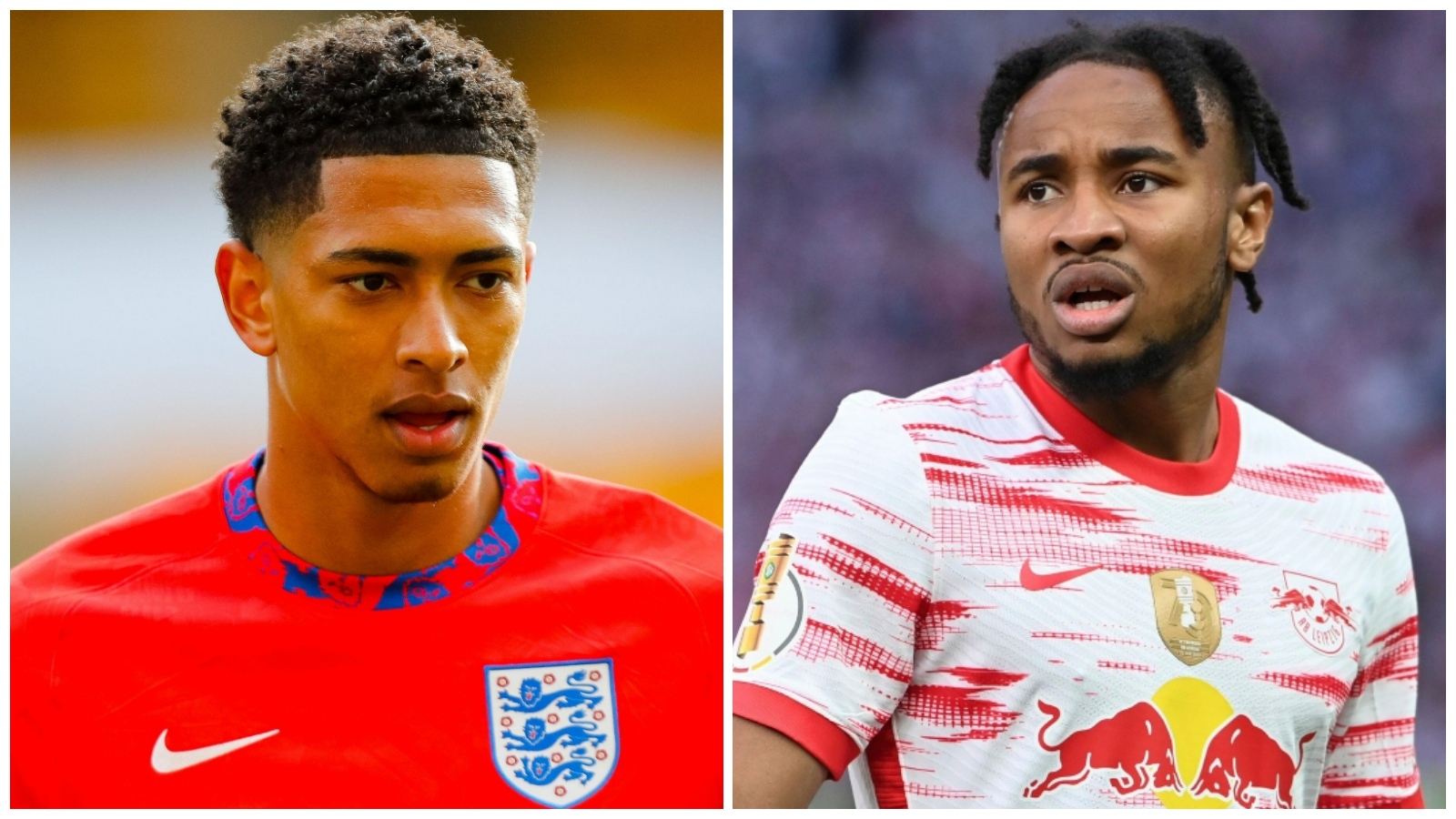 Moving onto the Bundesliga, we pick ten players that should move to the Premier League in the summer transfer window.

You can find our take on potential Ligue 1 transfers here.

Christopher Nkunku (RB Leipzig)
The French attacker was one of the hottest players in Europe last season and his form was rewarded with a maiden call-up to his national team, with Didier Deschamps giving him a chance to shine on the international stage. Nkunku bagged a measly 35 goals and contributed with a rather pathetic 19 assists across all competitions last term, and it is no surprise that he is attracting interest from a host of top clubs.

Manchester United are keen, as are Chelsea and Arsenal. The 24-year-old can operate on either flank, in behind the striker as a playmaker or a goal threat, or as an out-and-out No. 9, making him a very desirable player. He would be perfect for Thomas Tuchel’s Chelsea and he could be the man to finally lead the line with purpose for the Blues, having struggled to recruit an excellent and consistent No.9 since Diego Costa left Stamford Bridge.

Florian Wirtz (Bayer Leverkusen)
Wirtz is one of the best teenage footballers in the world and I have previously called for him to move to the Premier League, so it is no surprise that he features on this list. Valued at £63million by Transfermarkt, the 19-year-old already has four caps for Germany and is Bayer Leverkusen’s star player, filling Kai Havertz’s boots very nicely after his compatriot joined Chelsea in 2020.

Another versatile attack-minded player, Wirtz is the fourth-youngest player to play in the Bundesliga (17 years, 15 days) and is showing an awful lot of promise. Last term, the youngster had seven goals and ten assists in the league, whilst only playing 24 games. In his first seven domestic games of the season, Wirtz scored four and assisted six.

Unfortunately for him, and for potential suitors, Wirtz tore his ACL in March, which makes a summer transfer unlikely; however, stranger things have happened.

Jude Bellingham (Borussia Dortmund)
The second wonderkid in a row, Bellingham is already lighting it up on the domestic, continental and international stage at the age of 18. The Stourbridge-born playmaker was signed by Borussia Dortmund from Birmingham for £22.5m and it would not be unreasonable for him to leave for over £100m.

Real Madrid are believed to be interested, as is probably every single Premier League team. Bellingham has it all and has looked like a grown man ever since breaking onto the scene at the age of 16. The 15-cap England man can boss any midfield and is likely to transition better than anyone else on this list if he does move back to his home country.

The most likely destination for Bellingham would probably be Liverpool, who are apparently done this summer, but could have an ace up their sleeve. Manchester United, on the other hand, would do very well to convince the player to join, and if they do – unless they end up spending about £250m – will make one of the best signings in their history.

Moussa Diaby (Bayer Leverkusen)
Diaby and Nkunku’s inclusions on this list were guaranteed, given the fact there is genuine interest from the Premier League this summer. The French winger had a superb 2021/22 campaign, scoring 13 and assisting 12 in the Bundesliga.

Newcastle have been linked with Diaby and they are in the market for pretty much every position, so that is no surprise. The 22-year-old is a direct winger who is decent in front of goal, and if he can deal with the physicality of English football, should be a revelation for whoever he signs for.

Robert Lewandowski (Bayern Munich)
If Lewandowski comes to the Premier League and flops, ‘Bundesliga tax’ will be confirmed, because if he can’t thrive after Jadon Sancho, Shinji Kagawa, Wout Weghorst, Kai Havertz and Henrikh Mkhitaryan could not, then there is genuinely no hope for anyone in Germany.

The legendary Polish striker is an absolute goal machine. He scored 103 in 187 for Dortmund before joining Bayern Munich and netting 344 times for them in 374 matches.

Having expressed his desire to leave Bayern this summer, a move to the Premier League is probably a case of now or never, despite Barcelona leading the race to sign the 33-year-old. Having said that, Barca are skint, and if they can’t afford him, on top of the fact he has burnt his Bayern bridges, we could see Lewandowski finally play for an English team if a suitable Premier League offer comes in.

Josko Gvardiol (RB Leipzig)
Having picked nothing but shiny attacking players, it is time to finally talk about a defender. Gvardiol has only spent one season in the Bundesliga, but it is already likely that he will depart for England this summer. Chelsea – who are featuring quite heavily here – are desperately searching for a new central defender following Andreas Christensen and Antonio Rudiger’s departures, on top of club captain Cesar Azpilicueta’s potential exit. Sevilla’s Jules Kounde is reportedly their top target and has been for over a year, but Gvardiol is also near the top of Tuchel’s shortlist.

At the age of 20, the Croatian defender is one for the future and the present, and if Chelsea don’t sign him, someone else will.

Evan Ddicka (Eintracht Frankfurt)
Here’s another defender because I’m feeling particularly fruity today. Ndicka is one of 200 brilliant French centre-halves in world football at the minute, so it is no surprise and not an insult that he is uncapped by Deschamps.

The 22-year-old is highly rated in Germany and is out of contract next summer, meaning Europa League champions Frankfurt could be open to letting him leave in the current transfer window to receive a transfer fee. Ndicka played 43 games across all competitions last term, chipping in with four Bundesliga goals as he only missed two league games all campaign.

Another bonus is that he is left-footed, which is clearly a bonus to many managers, made evident by Nathan Ake’s £50m transfer to Manchester City two years ago. Manchester United could be an ideal move for player and club, although, Frankfurt have Champions League football and United don’t…

Such a superb player. pic.twitter.com/qiAPREtmdD

Serge Gnabry (Bayern Munich)
Gnabry also has one year left on his contract, which has sparked rumours he could re-join Arsenal this summer. After leaving north London for £4.5m, the German winger has only improved and after a single season away from the Emirates he was snapped up by Bayern, for whom he has scored 64 times.

With a single season left on his current deal plus the arrival of Sadio Mane from Liverpool, a move this summer could be perfect for all parties.

Unsurprisingly, Arsenal are believed to be interested, as are Manchester United, Chelsea, Tottenham and Real Madrid, according to reports, anyway. Although a summer deal would suit the player and club, it would be no surprise if he does not depart the Bundesliga champions until 2023.

Konstantinos Mavropanos (Stuttgart)
Another Arsenal reject, the Gunners are regretting letting Mavropanos join Stuttgart for pennies after sending him out on loan to the German side following a disappointing spell in north London.

The Greek centre-half could not break into the Arsenal team under Arsene Wenger or Unai Emery, despite the fact he was competing for a place in the team with Shkodran Mustafi, Sokratis and David Luiz.

Having proved himself as a top-class, modern defender, Mavropanos can definitely make the jump to the Premier League and show Arsenal what a mistake they made. West Ham have been linked, and the Twitter meltdown from the Gunners fanbase when he inevitably leaves Stuttgart for over £15m will be a joyous time for us all.

Regardless of what you think of them as players or individuals, allowing Guendouzi and Mavropanos to leave the club for just over £10m COMBINED is the worst transfer business I've seen from Arsenal in quite some time.

David Raum (Hoffenheim)
Having watched him on the international stage for Germany this month, Raum impressed me and looks like the sort of player who would take to the Premier League very quickly. A marauding left-wing-back, Raum had a terrific 21/22 campaign with Hoffenheim, providing 13 assists in the Bundesliga as his side finished ninth.

Despite their clear interest in Brighton’s Marc Cucurella, Manchester City are said to be fans of the 24-year-old, who has a Transfermarkt value of £18m. With four years left on his Hoffenheim deal, he will not be cheap, and given the growing importance of full-backs, that is a given. As well as City, Liverpool could be a good option – at some point anyway, maybe not this summer. Another team Raum would suit is West Ham, Brighton if Cucurella leaves, Leicester, and, lo and behold, Manchester United. I really am a broken record.