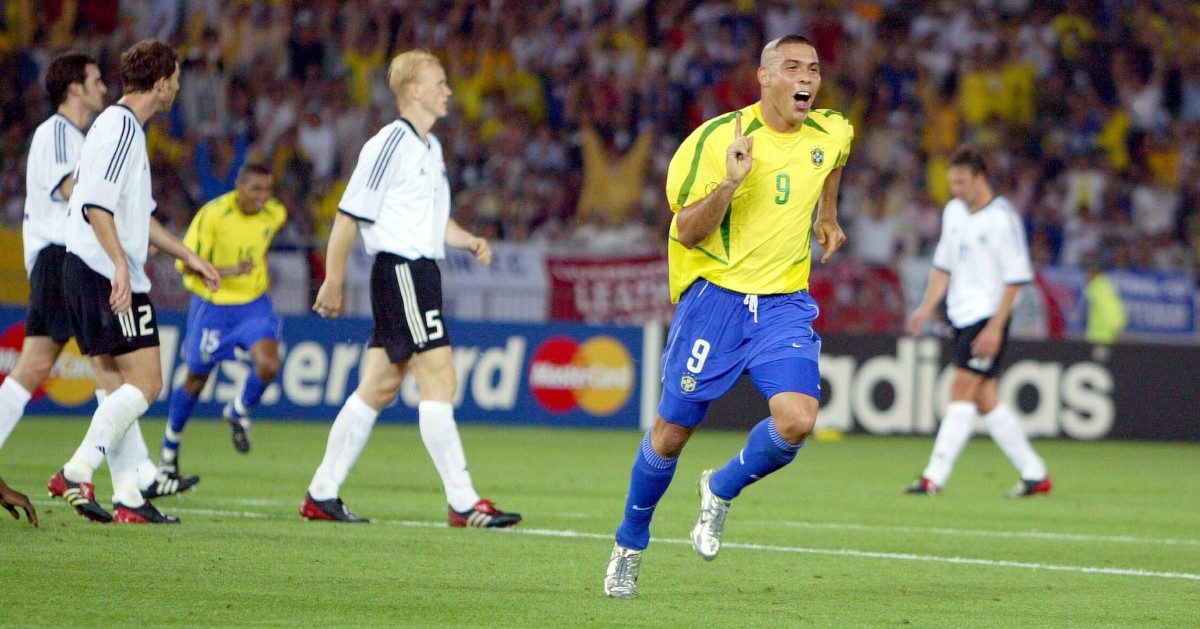 Some have already said England have an easy route to the Euro 2020 final because people never learn. But these paths really were favourable.

10) France (World Cup 1998)
The iconic hosts seemed predestined to become world champions for the first time to close out the 20th century but the draw in 1998 certainly opened up their path quite nicely. Saudi Arabia and tournament debutants South Africa were swept aside with seven unanswered goals in the group stage, while a 2-1 victory over Denmark showcased their ability to scrap and suffer.

France were indeed determined to make things hard for themselves. A solid but ordinary Paraguay side fell to Laurent Blanc’s golden goal in the last 16, while penalties were required after a quarter-final draw with Euro ’96 disappointments Italy. Croatia impressed in reaching the same stage of that tournament two years prior but France were heavy favourites in a semi-final against the brilliant Davor Suker and friends who, excellent as they were, would fail to even qualify for Euro 2000. The key was in avoiding favourites and defending champions Brazil until the final, at which point those mysterious events surrounding the glorious Ronaldo removed one last obstacle for Les Bleus.

9) Argentina (World Cup 2014)
The 2014 Argentina vintage was not a classic but it still reached a first World Cup final since 1990. Their first mistake was to force Lionel Messi to expend all his energy to help them navigate a smooth group containing Nigeria, Bosnia and Iran, all of whom were beaten only by a single goal, with Diego Maradona’s natural heir scoring each time.

Messi would win the Golden Ball without finding the net again in the tournament. Angel Di Maria rolled the Swiss out in remarkable last-16 scenes, Gonzalo Higuain rode the dark but disappointing horses of Belgium through the quarter-finals and Javier Mascherano took squeaky bum time a little too literally against the Netherlands. The Dutch only reached that semi-final with two goals in the closing minutes against Mexico and a Tim Krul-inspired shootout victory over Costa Rica. Louis van Gaal tried the substitute goalkeeper trick again when Argentina faced one shot on target in a goalless semi-final, but they let Ron Vlaar take their first spot-kick and it sort of spiralled from there.

8) Brazil (World Cup 2002)
They hardly needed the help in avenging the heartbreak of four years earlier but Brazil were handed a direct route to redemption when they sought justice in 2002. It remains one of the strangest World Cups in history: pre-tournament favourites Argentina and France both exited at the group stage, well-fancied Italy departed at the hands of South Korea in completely uncontroversial circumstances, with the co-hosts also handling outside bets Spain in the quarter-final. Senegal, United States and Turkey all made it at least that far as the underdog had its day.

Brazil met one of those sides twice as they beat a spirited Turkey in both the groups and semi-final. Costa Rica and China stood no chance against the Selecao and Belgium soon succumbed to those rolling Rs – Ronaldo, Rivaldo and Ronaldinho – in the knockouts. England were the best side Luiz Felipe Scolari’s winners faced and Danny Mills and Trevor Sinclair both started a quarter-final that Brazil trailed in terms of men on the field for longer (33 minutes) than they did scoreline (22 minutes) when Ronaldinho was dismissed shortly after he made an almighty mess by lobbing Seaman.

7) West Germany (World Cup 1974)
It feels like a modern phenomenon, the desire to try and manipulate a tournament’s natural course by trading in a worse group position for a more favourable draw. Some felt that England might have benefited from such a pragmatic and hubristic outlook at Euro 2020 but this tournament has offered no evidence so far that it would have paid off. There is, however, a historic precedent.

For want of a better phrase, West Germany surrendered the battle but won the war at the 1974 World Cup. A first group stage pitted them against a stone cold Chile, tournament virgins Australia and neighbours East Germany. By the time that politically charged match took place the actual jeopardy was almost entirely removed: Chile and Australia played out a goalless draw a few hours earlier and so both East and West Germany knew they were through in the years before final group fixtures kicked off at the same time.

The former secured a famous victory, their reward for which was a doomed place in the second group stage alongside favourites Netherlands, Brazil and Argentina. West Germany, as punishment for coming second, landed Poland, Sweden and Yugoslavia, advancing to the final at their expense and overcoming the Dutch to lift the trophy.

6) Italy (World Cup 2006)
In terms of knockout games alone, France had one of the toughest journeys to a major tournament final at the 2006 World Cup. For the chance to atone for that disaster as defending champions in Japan and South Korea, they had to navigate a way past Spain, Brazil and Portugal in the last 16, quarter-final and semi-final respectively. France displayed immense poise and control to dispatch three nations that had all recorded perfect group stages in conjunction with their reputations.

By contrast, Italy beat Ghana and a Czech Republic side that was a shadow of its quite wonderful self, while drawing with USA to book a last-16 date against Australia. Francesco Totti helped them stumble through that and into a quarter-final trouncing of Ukraine, at which point an exciting but naive Germany were impeccable hosts. Fabio Grosso has still not stopped celebrating, nor should he ever.

5) France (Euro 1984)
Cristiano Ronaldo needed five European Championships to take the tournament top scorer record from Michel Platini, who played in five European Championship matches altogether. It is technically correct to say he featured in those games; it is more reflective of the truth to point out that he absolutely dominated them as France won their first major honour.

The format perhaps lent itself to such heroics. The opposition certainly did. Denmark were not quite at their absolute mid-1980s and early 1990s peak. Yugoslavia could not get past the group stage of the 1982 World Cup and failed to even qualify for the 1986 edition or Euro 1980. Belgium had yet to truly impress on a global stage. Platini started slowly with a single goal and then plundered successive hat-tricks before scoring an extra-time semi-final winner against Portugal, themselves talented but making only their second ever appearance at a major tournament.

Platini would have tormented any team at that point. It was just that he was given a series of opponents who were forced to rest to little more than kicking him and hoping for the best.

4) Croatia (World Cup 2018)
Those who assume that reaching a World Cup semi-final might have augmented Gareth Southgate’s coaching reputation are familiar with the counter argument: England beat no-one of note in Russia and lost every time they faced someone decent. Tunisia, Panama, Colombia and Sweden are hurdles that any team should be expected to overcome, while stumbles and trips against Belgium and Croatia exposed an average England side that had only advanced so far because of the luck of the draw.

Croatia eventually dumped them out in the semi-final and their route was forgiving enough in itself. A group of Argentina, Nigeria and Iceland might have presented problems at various points throughout history but absolutely not in 2018, while Denmark were obdurate if lacking in quality and Russia had the physical attributes without the technical or mental proficiency. Croatia took them both out on penalties; England were so patently awful they could not even get that far as Mario Mandzukic stunned them in extra-time.

3) Germany (World Cup 2002)
Brazil at least had the excuse that they would probably have reached the final regardless. Had it not been for a remarkably generous path then Germany would have no reason to remember the 2002 World Cup so fondly. That tournament was the exception to a rule of atypical underachievement at the time: losses in the 1994 (Bulgaria) and 1998 (Croatia) World Cup quarter-finals to unfancied opposition, as well as group-stage eliminations at both Euro 2000 and 2004, forced a total overhaul of their development and scouting systems.

While the Extended Talent Promotion Programme was in its infancy, Germany bundled themselves into the 2002 World Cup by virtue of a qualifying play-off win over Ukraine after finishing behind England in their group. Republic of Ireland, Cameroon and Saudi Arabia promised safe passage to the knockouts of the tournament itself, with successive 1-0 victories over Paraguay, USA and South Korea testing a nation’s relationship between success and entertainment. That inner turmoil is said to continue for some countries to this day.

2) Portugal (Euro 2016)
It matters not how you win the trophy, just that you do. Portugal set out to stretch that theory to within an inch of its credibility at Euro 2016 by edging France on a photo finish in the final after being given a five-lap head start a month earlier.

The group was poor. Hungary, Iceland and Austria had their individual strengths – England discovered that in one particular instance – but Portugal should have navigated it with ease. They instead drew against each of them and advanced as one of the four best third-placed teams, above Northern Ireland only on goals scored. From there they beat a decent Croatia after extra-time, sneaked past the resilient Poland on penalties and secured their only victory in 90 minutes of the entire tournament against Wales in the semi-final. It was the equivalent of having a glass door being held open for them, only to smash through the wrong side before being dragged to their feet by an enraged Pepe.

1) Germany (Euro 2008)
The FIFA rankings, introduced in December 1992, can be an absolute nonsense but by their definition, Germany’s journey to the Euro 2008 final was the easiest in modern major tournament history. The five teams Die Nationalmannschaft faced in Austria and Switzerland had an average position of 33.2 before the competition started – much higher than the next most favourable run (Croatia, 2018 World Cup, 28.1).

Germany were the favourites to prevail for most, although much of that came down to the innocence of a brilliant Spain side that was yet to win its first major honour since 1964. The draw kept both apart until the final; Germany were even permitted a group-stage slip to finish second behind Croatia but well ahead of Poland and Austria.

England did not even qualify and Portugal had fallen away as contenders in the years since losing to Greece in the 2004 final, although they played their part in a classic 3-2 defeat as Germany advanced to face Turkey in the semis. Another 3-2 victory, this time with Philipp Lahm’s 90th-minute winner cancelling out a Semih Senturk equaliser in the dying stages, booked them a date with and a loss to Spain in the final. It is no real wonder they got that far.