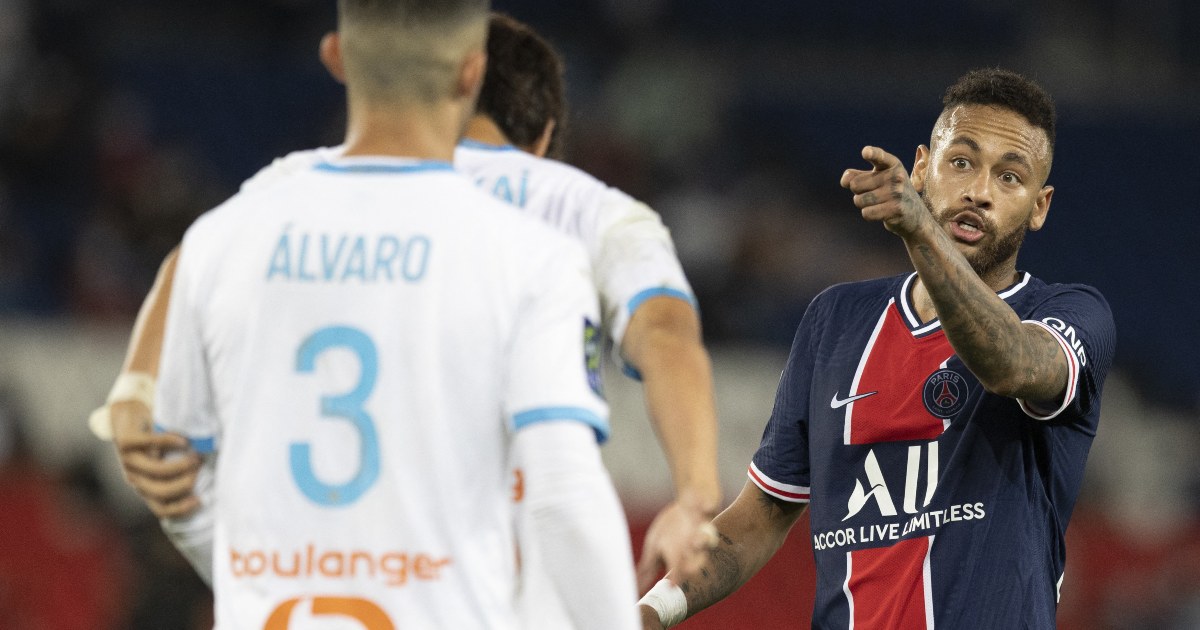 A week after Scotland’s Stephen O’Donnell tried taunting Jack Grealish at Wembley about his “lovely calves” in a meek attempt to put the England star off his game, here are ten more sledges (and screams) that had some, little or no impact…..

1) Neymar earns more but learns the hard way
Marseille defender Alvaro Gonzalez revealed that Neymar mocked his inferior salary during the fiery Le Classique clash in October 2020 when no less than five players were sent off in the space of a crazy three minutes, including the Brazilian superstar. The Marseille defender said: “Neymar told me he won in one day what I earn in a year, and it’s true. I told him I was very happy with my salary.”

The best comebacks are always the most civil……Gonzales also had the last laugh on the pitch as Marseille ran out 1-0 winners. He tweeted: “Sometimes you have to learn to lose and take it on the field.” Neymar responded rather more forcibly: “The only regret I have is for not being in the face of this a**hole”.”

2) Marco makes Zizou go ga-ga
The 2006 World Cup final between Italy and France was Zinedine Zidane’s final game before retirement. The French legend left his imprint on it.

Or Marco Materazzi to be more precise Italy’s notorious hardcore honcho recalled: “Zidane had scored France’s goal in the first half and our coach (Marcello Lippi) told me to mark him.  The late tackles, altercations and exchanges continued until 110 minutes, when things reached a head. After the third clash, I frowned and he retorted: ‘I’ll give you my shirt later’. I replied that I’d rather have his sister than his shirt.”

The next thing he knew, the centre-back was rolling on the floor after Zidane’s head exacted retribution. There was contrition from the victim though Zizou was less apologetic, suggesting that he would rather die than apologise. Materazzi scored the equaliser and one of the shootout penalties that won the Azzurri the title.

3) Keano takes a sledgehammer to Big Mick
“Roy was steaming, he was ready to blow, I couldn’t believe it,” recalls Clinton Morrison on the episode that rocked Irish football during the build-up to the 2002 World Cup on the otherwise peaceful Pacific island of Saipan.

Keane was reportedly miffed that the Republic’s training facilities were not up to scratch but there was more to it than missing bibs and cones. He had been accused by Big Mick of missing matches by faking injury in front of the players. Unsurprisingly. this accelerated the following tirade…

“You were a crap player, you are a crap manager. The only reason I have any dealings with you is that somehow you are manager of my country and you’re not even Irish, you English ****. You can stick it up your bollocks.”

McCarthy sent Keane packing while the latter insisted that he “actually left people off lightly!” Phew.

4) Vinnie grabs a handful of Gazza
When twentysomething sensation Paul Gascoigne visited the inhospitable surroundings of Plough Lane in 1988, he was “welcomed” by Vinnie Jones, the man who had no hesitation in taking out Steve McMahon within the first minute of the FA Cup final that season. Jones recalled: “We were fighting…..and he started jostling as well and (he)… said something about ‘how much are they paying you for this, are you getting £100 for this today?” That was a red rag to a bull for a former hod-carrier. Vinnie snapped and gave Gazza the lowest of snatches as Guy Ritchie might say: “ I grabbed it and it was just spot on! There weren’t no fiddling about… I just grabbed it and didn’t let go.”

5) Ruud refuses to rise to Keown’s bait
Van Nistelrooy was already in Arsenal’s bad books in 2003’s Battle of Old Trafford after the Dutchman had been implicated in getting Patrick Vieira sent off. Martin Keown recalls the striker tended to “go down like a pack of cards.” No love lost there then.

When RVN missed the last-minute spot-kick that would have won the game, the whole Arsenal team decided to pile in. Lauren shoved a knee into his back, but it was Keown who shouted in the striker’s face after jumping as high as a kite in celebration at the miss. Van Nistelrooy had to walk off like a man who had scored a first-ball duck: “I haven’t seen him for a number of years. I think he was a bit petrified.”

The following season, Van Nistelrooy was on target from the spot when United ended Arsenal’s 49-match winning streak.

6) Krul psyches out Costa Rica
If you thought Joe Hart was the chatterbox from hell in the 2012 Euro shoot out against Italy (Andrea Pirlo soon shut him up), then Tim Krul showed how it is done in the 2014 World Cup quarter-final.

“I psyched them out,” Krul said after the game. A video reel of the penalty kicks against Costa Rica does indeed show the Dutch keeper wasn’t short of a word or ten to the Central Americans. “You try to do everything you can without being too aggressive. I tried to get in their minds. I watched them [Costa Rica] against Greece and studied them and I told the players that I knew where they were going to shoot to make them a bit nervous. Maybe it worked.”

It did. Krul guessed right with all five spot-kicks, saving two of them….

7) Hendo hammers Karius in Roma
There’s nothing like a good old vocal difference of opinion on the pitch with your teammate. After you’ve won. Liverpool had just made it to the Champions League final in 2018, but being the perfectionist that he is, skipper Jordan Henderson couldn’t help ripping into keeper Loris Karius. One can only wonder if Jordan spent the next three weeks mouthing Simon Mignolet into Jurgen Klopp’s ear. During the frantic end to the match, Roma scored twice in the closing moments as Liverpool dropped deeper than the Titanic.

@GaryLineker Did anybody else see Henderson having a pop at Karius for not staying in the middle of the goal for the Nainggolan Penalty at the end! Think he says something like “I told ya, dont move”!! pic.twitter.com/BKZt6Tj9Ua

8) Frank gives Jurgen a piece of his mind
Liverpool lifted their inaugural Premier League title on a night to remember in July 2020 with a 5-3 win over a hapless Chelsea, but Frank Lampard was more interested in telling the Reds to stop larging it up.

Lampard was furious with the decision to give a foul that led to Liverpool’s second goal, laying heavily into Reds assistant coach Pep Lijnders. Trent Alexander-Arnold scored from the resulting free-kick and Lijdners wasn’t exactly subtle in hiding his delight. Frank was suitably unimpressed: ” One title you’ve won and you’re f*****g giving it the big ‘un. F*** off!”

Jurgen just told him to calm down. Good advice. 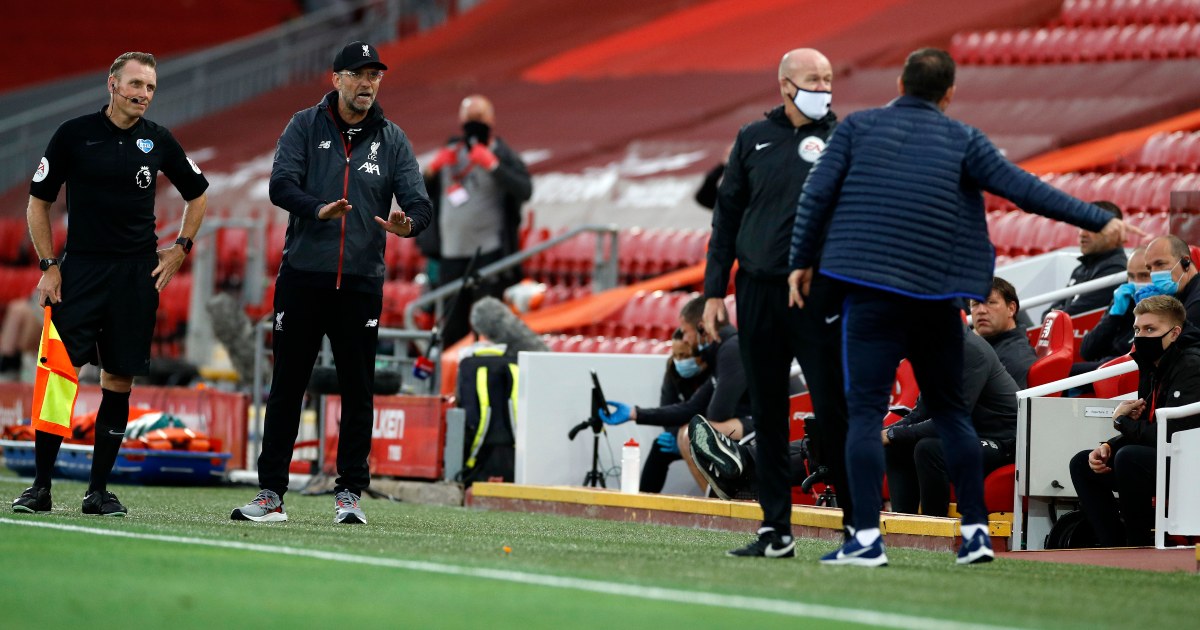 9) Di Canio gets it in the neck from the ref
Di Canio was a curious case of one who veered from fair play when Everton keeper Paul Gerrard was incapacitated to simply shoving over the referee when he felt like it.

The fiery Italian claimed foul play by the ref during West Ham’s UEFA Cup defeat against Steaua Bucharest in 1999. He alleged that Danish referee Claus Bo Larsen had called him “a bastard” twice and sensibly told Hammers boss Harry Redknapp to be removed from the field of play before the referee did the job for him.

10) Kimmich and Robertson try ‘The Scream’
During the first leg of the Champions League round of 16 in 2019, Joshua Kimmich’s last-ditch tackle on Sadio Mane prevented a potential Liverpool goal. The temperamental German memorably screamed a celebration right into a smiling Mane’s face. Trouble was, Kimmich picked up a booking that night which prevented him from taking the pitch in the second leg where the Senegalese’s two goals secured Liverpool’s passage on their way to number six.

What goes around, comes around… Andy Robertson tried the Kimmich tactic just as Mason Greenwood was about to pull the trigger in the FA Cup tie in January. An unflustered Greenwood scored coolly in the corner and the Scot was left to ponder on other ways to get one over.