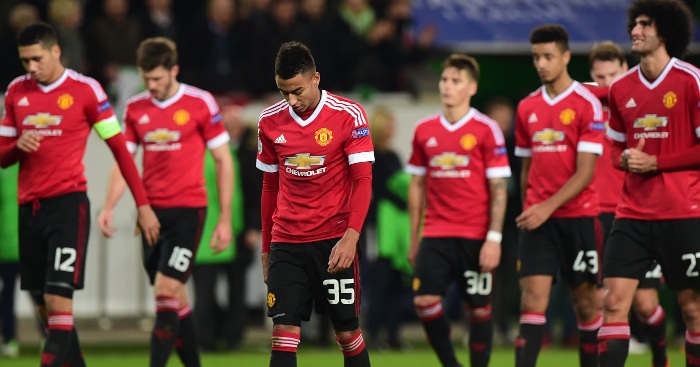 Man Utd 0-1 Newcastle – December 2013
It was after a humbling at home to Alan Pardew’s Magpies, who’d not won at Old Trafford since 1972, when it became startlingly clear that David Moyes’ sticky start was the symptom of much deeper problems. Having lost 1-0 at Old Trafford for the second time in four days, United slumped to successive home defeats for the first time since 2001-02, dropping 13 of the 24 points available to them on their own patch.

David Moyes says #mufc must improve in a number of areas, including passing, creating chances and defending.

“Probably not, no,” Moyes said in response to a question over whether he expected the job to be this hard. “Today was as bad as it gets.”

If only that were true, Dave…

Man Utd 0-3 Man City – March 2014
Ten days after being walloped 3-0 on their own patch by Liverpool, United suffered similar humiliation to a City side which was superior in every department. That was bad enough, but Moyes poured a barrel of salt into the gaping wounds of United supporters with his post-match assessment.

“I think we’ve played a very good side and it’s the sort of standard and level we need to try and aspire to.”

A reminder: Moyes’ was managing the reigning champions. Or at least he was for three more games before Ed Woodward finally, cack-handedly put him out of his misery.

As for "we aspire to play like City", the most ill-advised thing Moyes could say. Providing the nails and hammer for his own coffin.

Leicester 5-3 Man Utd – September 2014
With Moyes gone and Louis van Gaal, a proven winner with an ego demonstrably large enough to handle the position, installed it was presumed things would quickly improve, especially after United spent a fortune in the summer on the likes of Angel Di Maria, Luke Shaw, Ander Herrera, Marcos Rojo, Daley Blind and Radamel Falcao.

But Van Gaal’s side won only one of their opening five Premier League games, with a 4-0 humiliation at MK Dons in the League Cup thrown in too, just in case the scale of the job had not yet dawned on the Dutchman. At Leicester, they lost after blowing a two-goal lead for the first time in the Premier League, despite Van Gaal having pointed pre-match to four dossiers of homework he had done on the newly-promoted side.

Wolfsburg 3-2 Man Utd – December 2015
After being booed off the previous weekend following a 0-0 draw with West Ham – the fifth time in nine matches Van Gaal’s side had failed to score – United went to Germany knowing a place in the Champions League last 16 would be theirs if they beat Wolfsburg or if they matched PSV Eindhoven’s result against CSKA Moscow. Hardly the group of death…

But United f*cked it. They twice switched off at set-pieces shortly after scoring themselves to tumble into the Europa League. The post-match inquest needed only to look at the side which finished the game: De Gea, Varela, Smalling, Blind, Borthwick-Jackson; Fellaini, Carrick, Lingard, Powell, Depay, Martial.

THAT was as average as it could be. Not great at all and there's a long way to go.!

Stoke 2-0 Man Utd – December 2015
The Wolfsburg loss was the first of four consecutive defeats which culminated in a truly awful 2-0 reverse at Stoke on Boxing Day.

Van Gaal was already under the cosh before the trip to a windy Britannia Stadium (is it ever anything else?) and the manager responded to the pressure by dropping captain Wayne Rooney. From the players he did pick, Van Gaal got nothing. United were 2-0 down at half-time following 45 of the most heartless, dispiriting minutes since Fergie packed up his desk.

The first goal came after Memphis Depay’s woeful back-header to David De Gea and the Dutchman was punished by being made to play in the reserves the following day. Rooney tried to offer some him advice: “I said, ‘Look, it’s a bit difficult. Just don’t come in with all your fancy stuff.’ And he turned up for the reserve game in his Rolls Royce, wearing a leather jacket and a cowboy hat. I just thought, ‘What’s the point?’ ”

I'm not even surprised….that's what hurts even more at @ManUtd ….come on boys

Man Utd 0-3 Tottenham – August 2018
Jose Mourinho’s first season was not without its tribulations but two trophies (the Community Shield doesn’t count, Jose) and a second-place finish papered over some of the cracks. Until the summer, at least.

Mourinho and United pandered to Paul Pogba’s whims for as long as the manager could bear, giving him the captaincy even after the World Cup winner admitted in the wake of a 3-2 defeat at Brighton in the second game of the season that his attitude was ‘not right enough’. The following game at home to Spurs was a similarly chastening experience for Mourinho.

Perhaps to make a point over Woodward vetoing his wish for a central defender during the summer, Mourinho started Ander Herrera as one of three centre-backs. The plan was an abject failure, with Mauricio Pochettino’s Spurs winning with three second-half goals.

Mourinho retained the backing of the Stretford End and the manager saluted the the supporters as he left the stage while twirling a United scarf. In the press conference after, he came out fighting, holding three fingers up: “Just to finish, do you know what was the result? 3-0, 3-0. Do you know what this is? 3-0. But it also means three Premierships and I won more Premierships alone than the other 19 managers together. Three for me and two for them – two Pep Guardiola and Manuel Pellegrini. So respect man, respect, respect, respect.”

The bullishness and the backing didn’t last. This United team, as they would anyone, broke Jose within a matter of weeks.

Liverpool 3-1 Man Utd – December 2018
The final nail in Mourinho’s coffin was clattered in by Liverpool, though his own players appeared quite willing to lend their rivals a sledgehammer to get the job done right.

United allowed their hosts 36 shots on their goal, the highest number the Red Devils have ever given up in the Premier League. It was typical of the season so far, with Mourinho’s men having conceded 29 league goals, one more than they did in the entirety of the 2017-18 campaign and the most goals they’d conceded at that stage of a top-flight campaign since 1962-63. At the other end, they looked utterly devoid of anything other than lethargy and apathy, while all the time Pogba was left on the bench, barely able to suppress his smirk.

Two days later, Jose was gone. Deservedly so, as he admits.

Everton 4-0 Man Utd – April 2019
When Mourinho went, Ole Gunnar Solskjaer came in as a caretaker boss and United, powered by smiles and sunshine, went on a barely-believable run which saw the Norwegian get the gig permanently. Of course, once that had been announced, the wheels came off almost immediately.

United phoned it in for the rest of the season, with a truly awful performance at Everton the second of six winless matches during the run-in. The Toffees, who at no point had to get out of second gear, were 4-0 up with more than a quarter of the game remaining. The only positive for United was that the scoreline was not even more embarrassing.

“Everyone here can say with hands on hearts that’s not good enough – not worthy of a Manchester United team,” admitted Solskjaer, whom looked close to tears when he approached the away supporters at full-time. “We know that and apologise again to fans.”

The reaction Solskjaer got from his barely-arsed players? Home defeats to Manchester City and long-since relegated Cardiff and draws with Chelsea and also-relegated Huddersfield.