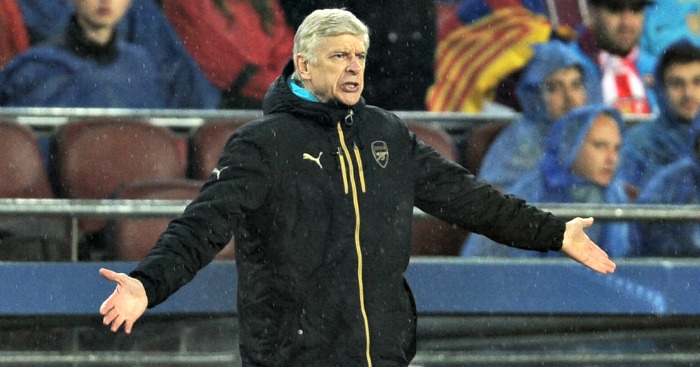 1) Plenty of transfer speculation – but few actual transfers
“We could go into the market and probably buy any player in the world, apart from half a dozen who are unbuyable. In the accounts, there’s over £200million in the bank,” said Arsenal director Lord Harris in the summer. Cue links to a host of star names throughout the transfer window…

Arsene Wenger may have spent big on Mesut Ozil and Alexis Sanchez in recent years, but when fans are regularly reminded of the club’s bursting bank accounts, the Gunners’ failure to address obvious flaws in their squad is mind-boggling. Petr Cech represented their only signing of a summer where each of their closest challengers also failed to strengthen. Looking ahead to next summer, a centre-back, defensive midfielder and striker are all required. Expect the arrival of another attacking midfielder.

2) Opening day frustration
The calls for Wenger to make more signings usually reaches fever pitch at the full-time whistle on the opening day of the season. In the last six campaigns, the north Londoners have won their first Premier League fixture only once.

This term, Cech gifted West Ham a 2-0 victory at the Emirates, while in 2013, Aston Villa triumphed 3-1. Even their lone victory in that spell was somewhat fortuitous, coming thanks to a stoppage-time Aaron Ramsey goal over a 10-man Crystal Palace side that was still reeling from the surprise departure of Tony Pulis.

3) Goalkeeping errors
The £10million signing of Cech from Chelsea has undoubtedly addressed one of the Gunners’ problem positions. However, it has not led to a complete eradication of mistakes between the posts.

Cech’s aforementioned horror show against the Hammers left Arsenal fans contemplating whether Chelsea had stitched them up, while David Ospina conspired to quite literally throw the ball into his own net against Olympiakos in the Champions League. The ghosts of Manuel Almunia, Vito Mannone, Wojciech Szczesny and Lukasz Fabianski continue to haunt the six-yard boxes at the Emirates.

Since 2007, Arsenal have topped their group only twice. In those nine years Sevilla, Porto, Shakhtar Donetsk and Schalke have all finished ahead of Wenger’s men. Arsenal have now equalled the record for consecutive knockouts at the last-16 stage, having suffered defeat in each of the last six years.

5) Injuries, injuries and more injuries
If there is one table Arsenal have got used to topping, it is the injury table. Serious questions have been asked of the club’s medical staff, usually by Dutch fitness coach Raymond Verheijen.

Midfielders Aaron Ramsey and Jack Wilshere are two of the most regularly crocked culprits, which is quite a problem when their replacements, Tomas Rosicky and Mikel Arteta, are also usually found in the treatment room.

6) Promising positions
Strangely, as the injuries start to kick in, Arsenal tend to find some form, perhaps as they force Wenger to field a settled side. Often this leaves the Gunners well-placed come the midway stage of the season, leading to plenty of suggestions they are ready to finally end their title drought.

Indeed, on January 2 this year, Arsenal topped the Premier League and were two points ahead of Leicester City. Arsenal also topped the league at the start of 2014 and 2008, while they trailed by only two points in 2011 and three points in 2010.

Even when their title hopes appear doubtful, more often than not, they will be one of the favourites in the cup competitions.

7) The horror spell
Few teams have the ability to effectively end their season in such a short space of time quite like Arsenal, although even by their standards they have excelled at such a feat this month.

Back-to-back league defeats to Manchester United and Swansea have all but ended their title chances, while losses in the FA Cup and Champions League within a fortnight means the north Londoners are likely to end the season trophyless.

Trailing leaders Chelsea by four points with a game in hand in March 2014, Arsenal then failed to win any of their next four fixtures, including a 6-0 thrashing at Stamford Bridge and a 3-0 defeat at Everton. Come April 6, Wenger found his side 10 points off the summit having also played two matches more than Manchester City.

8) Wenger out!
And at this point the calls for Wenger’s head generally reach their crescendo. Spring always sees the Frenchman thanked for his years of service before being pointed in the direction of the door because it’s someone else’s time.

It’s never actually clear who should be given a chance, but let’s worry about that later.

9) A late flourish
Unsurprisingly, once the pressure is off and any chance of the title has evaporated, results – and the quality of football – start to improve once more.

In the final three months of last season, Arsenal were beaten only once. In 2013/14, they won their final six matches. After defeat in the north London derby at the start of March 2013, Arsenal went unbeaten, including a 2-0 win at Bayern Munich (in a tie which was already over after the first leg). Obviously.

10) Lessons have been learnt, honest
And so by the end of the season, there is cautious optimism that next year will indeed be Arsenal’s year. Wenger is the man to lead the club to glory. Wilshere is ready to put his injuries behind him. Theo Walcott will finally become a top class centre-forward.

The more things change, the more they stay the same.