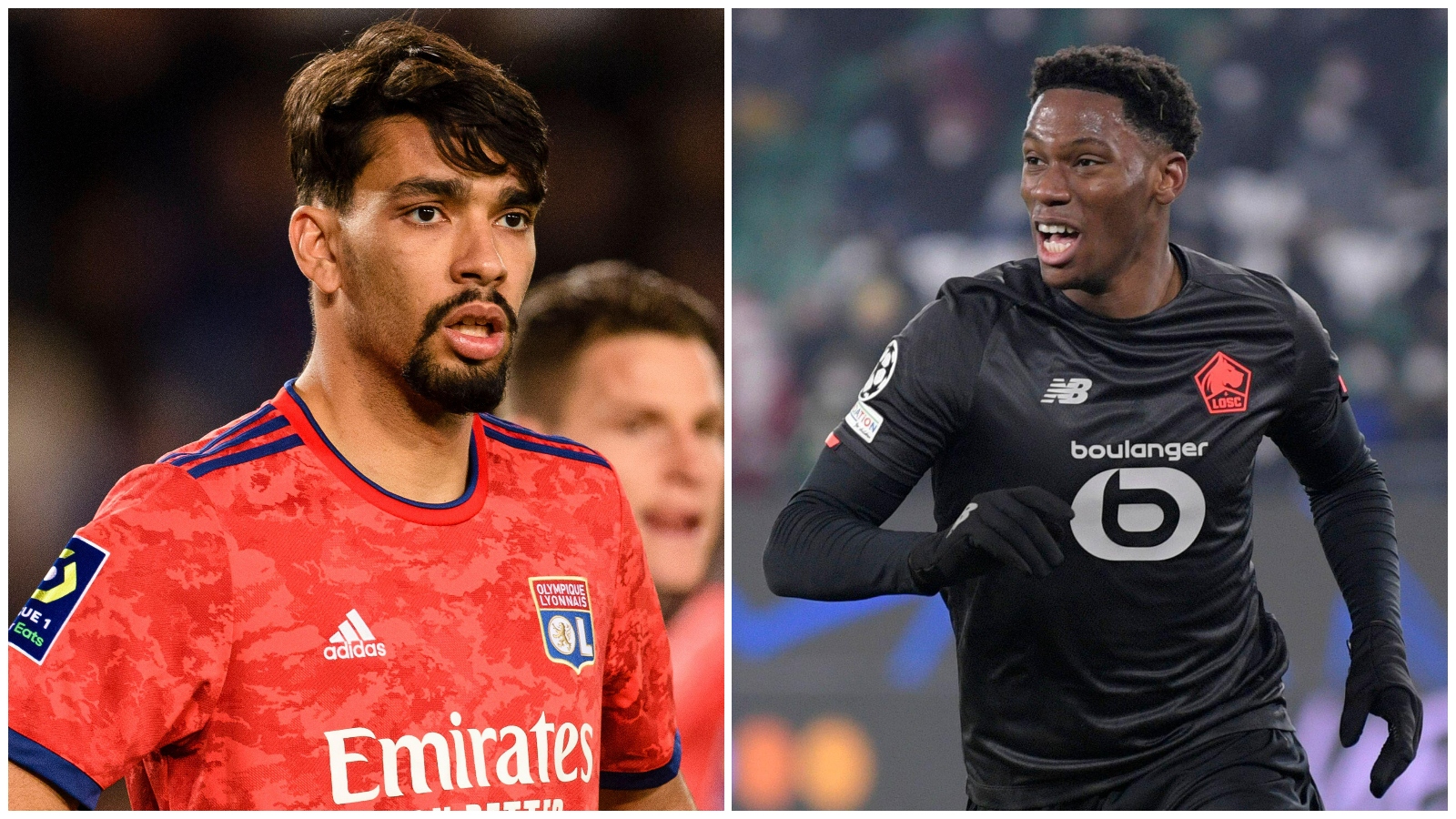 Starting with Ligue 1, we will pick ten players per ‘top five’ league that should move to the Premier League in the summer transfer window.

It’s important to be realistic – so no Kylian Mbappe – and not to include players who are pretty close to joining a team in England or elsewhere, so basically, Renato Sanches, Sven Botman and Hugo Ekitike won’t be included.

Seko Fofana (Lens)
Fofana was linked with Burnley in January and perhaps that interest would have been reignited this summer if they had defied relegation once again. But no, they are gone and we miss them already.

The Ivorian midfielder actually played for Manchester City and spent a season on loan with Fulham. He didn’t play for the City first team but made 25 appearances for the Cottagers, scoring once. Fofana’s stint in west London was in 2014/15, meaning the 27-year-old has no Premier League experience. This shouldn’t be a problem if a top-flight side wants to bring him back to England.

Fofana had a solid first season with Lens in 20/21 but took his game to another level last term, scoring eight Ligue 1 goals as he played every game in the French top flight, captaining his side for much of the season. Fofana’s eye for goal, durability and midfield presence make him a no-brainer for a mid-table Premier League side, should Lens be willing to let him leave.

Lucas Paqueta (Lyon)
After fully expecting Paqueta to join Newcastle United this summer, a move for the Brazilian playmaker has been ruled out by a few credible journalists. His relationship with Bruno Guimaraes makes him an easy link to make, but he would be absolutely perfect for the Magpies, who could use someone of his profile, with his versatility being something Eddie Howe likes and something Newcastle lack.

Paqueta can play as a striker, attacking midfielder, central midfielder or a winger and if Newcastle don’t fancy signing him, someone else should 100% do just that. Unsurprisingly, Arsenal are linked, but the fact he is under contract until 2025 could put off potential suitors. Having said that, he would be a good addition for teams chasing the title in England, and would be a great addition to literally everyone else in the Premier League.

🌟 Lucas Paquetá has been voted the best foreign player of the season in Ligue 1 by the supporters. 🇫🇷

Tottenham, Newcastle and AC Milan have all shown interest in the player. pic.twitter.com/OVQbRqwuZb

Neymar (PSG)
I know it was emphasised that I would not be unrealistic here, but, hear me out. There are murmurs that Paris Saint-Germain are open to letting the most expensive player in the world leave this summer, but I guess that will all come down to what new general manager Kylian Mbappe wants to do with his teammate.

Say what you like about Neymar, but he is one of the greatest footballers of all time. I’m not saying he is the best, or top ten, or even top 20, but he is one hell of a player and it would be spectacular to see him play in the Premier League before he retires. If it is true that PSG will let him leave, someone has to make it happen, and for some reason the only team I can personally see buying Neymar is Chelsea who (you never know) could pursue a deal if they fail to land Ousmane Dembele.

Nayef Aguerd (Rennes)
The first defender on this list, Moroccan centre-half Aguerd is attracting interest from West Ham, who have been pursuing a new central defender for bloody ages. Rennes paid £3.6m to sign Aguerd and will comfortably make a profit should he leave this summer, with a £25m transfer being rumoured.

The 26-year-old played 31 times in Ligue 1 last term, missing all three of Rennes’ league fixtures in January due to his time with his country at the African Cup of Nations. Rennes finished an impressive fourth in the league, meaning they will compete in the Europa League next season. They were also very close to knocking Leicester out of the Europa Conference League after topping a group including Tottenham.

Jonathan David (Lille)
David’s agent has previously said the Canadian would leave Lille this summer and after a number of stories in January, rumours surrounding the striker’s future seem to have died down in recent weeks.

Lille paid £24m to sign David and will likely be looking to double their money if he leaves, and that is no surprise given the fact he has three years left on his contract and boasts an impressive record for the French side, scoring 32 times in 96 matches, including 15 in the league last season.

West Ham have, once again, been linked and signing a new centre-forward seems to be as crucial as a new centre-half, given the fact Michail Antonio is David Moyes’ only recognised first-team No. 9. Arsenal are also in need of a new out-and-out striker and if their pursuit of Gabriel Jesus fails, David could be a solid option. Meanwhile, Chelsea could line up a move if Romelu Lukaku leaves, Manchester United need to bolster their attack, as do Newcastle, and Everton could also lose both Dominic Calvert-Lewin and Richarlison this summer.

Jonathan David pulls one back for Canada! | #CNL22 pic.twitter.com/ggwkhluCbq

Martin Terrier (Rennes)
Rennes have both Jeremy Doku and Terrier but the former struggled with injuries last season, so it would be pretty harsh to recommend him to a Premier League side, because scouts are obviously reading this article for some transfer inspiration.

Terrier is quite unfortunate to be without a France cap, but such is the incredible ability of the French side, the 25-year-old has only represented his country’s under-21s and under-20s. The attacker started the season relatively slowly, but exploded after netting a hat-trick against Saint-Etienne in December. Terrier ended the season with 21 Ligue 1 goals and scored in seven straight league matches as Rennes finished fourth.

A player who has such a great eye for goal and can play as a No. 10, No. 9 or as a winger on either side, Terrier would be a great signing for many Premier League clubs.

Sofiane Diop (Monaco)
There isn’t anything to suggest Diop will leave Monaco, nor do any Premier League teams appear to be interested, but I like him and always have done, so I want to see him move to England purely for selfish reasons.

The 22-year-old’s seven goals in 32 Ligue 1 matches last term is a decent return, but nothing to exactly write home about. Diop is a tricky winger who can also play centrally and is destined to be a France international one day; moving across the Channel could be just what he needs to do to grab Didier Deschamps’ attention. With his team back in the Champions League qualification stage in a couple of months, Diop may not leave unless he is offered a contract by a similarly ambitious club, while the lack of taxes in Monaco is also pretty sweet, so a transfer this summer probably won’t materialise. But a man can dream.

Alban Lafont (Nantes)
A list full of attackers would be so shallow, so I had to include a goalkeeper, and a terrific one at that. Lafont was arguably the best ‘keeper in Ligue Un last season and at the age of 23, is already Nantes captain. The Frenchman played every single minute for his side in the league and after featuring in zero rounds before, he was drafted in for Nantes’ Coupe de France final against Nice and kept a clean sheet, winning La Maison Jaune their first piece of silverware since 2001.

Nantes only paid £6.75m for Lafont and as one of the best young ‘keepers in the world, can certainly make a pretty penny should a team wish to buy him. Who in the Premier League would want Lafont? That is the question. Well, West Ham, Manchester United, Newcastle or Crystal Palace should definitely add him to their shortlist, and making a bid this summer could be wise before his stock gets even higher.

Benoit Badiashile (Monaco)
Having seen a lot of Monaco, Badiashile – alongside Diop and Aurelien Tchouameni – impressed me, and it was no surprise to see him linked with Newcastle in the winter transfer window. With their pursuit of Sven Botman all over the place, the Monaco centre-half could be a perfect alternative for the Geordies.

A solid modern-day defender, Badiashile is strong in the tackle and good with the ball at his feet, making him an ideal acquisition for any Premier League outfit. The 21-year-old played 34 times across all competitions in 21/22 as he struggled with a hamstring problem towards the end of 2021 and the start of 2022.

Amine Gouiri (Nice)
One of the most well-rounded forwards in France, Gouiri joined Nice for £6.3m in 2020 and has scored 26 and assisted 18 in 83 matches for Les Aiglons. The 22-year-old had double-digit goals and assists last term, and that feat should not be taken lightly.

The potential is definitely there and now could be a good time to swoop given the fact that Gouiri’s last league goal of the season came in January, so perhaps his stock is a little bit lower than it should be. Having said that, Transfermarkt value the French forward at a whopping £37.8m, making him one of the highest valued players on this list.

Obviously, Newcastle are a slight cop-out when suggesting who should pursue these players, but why not? They need to improve their whole squad and have the funds to do just that. While I find it unlikely that a top-six team will purchase Gouiri, a move to someone like Leicester or Wolves could work out very well indeed.