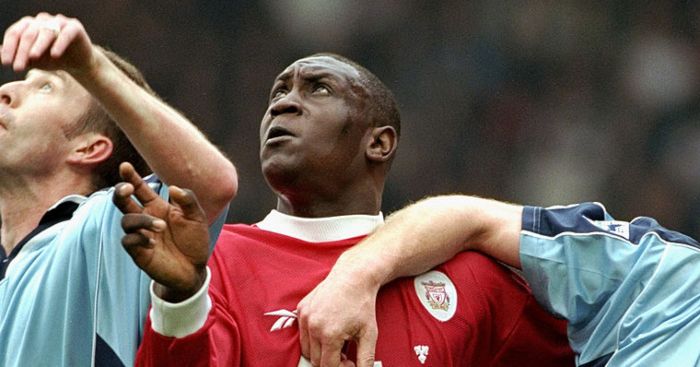 Roberto Firmino is rubbish, apparently. This lot know the value of a striker who lets others do the scoring.

10) Christophe Dugarry
For a striker who can boast character references from three former European champions in Milan, Barcelona and Marseille and one award-winning author in Steve Bruce, all on a CV including a 1998 World Cup win and Premier League survival with Birmingham half a decade later, Christophe Dugarry could never have been described as prolific.

Even in his best league season he never reached double figures. Dugarry hit nine for Bordeaux in 1994/95 but did not scrape together more than five goals in a single campaign anywhere else.

That was the tally he managed in a magnificent half-season on loan at St Andrew’s, propelling the club to four straight Premier League victories in April 2003 with Geoff Horsfield as his foil. Better that than warming the bench for Stephane Guivarc’h in France five years prior. Dugarry didn’t start a single game for the world champions in 1998 but still scored more goals than Aime Jacquet’s first-choice forward – one – before repeating that feat with similar success at Euro 2000.

9) Kevin Davies
The Blackburn version of non-scoring striker Kevin Davies bore a few subtle differences to the iteration that later impressed with Bolton. Which is to say there were a couple more flailing elbows and snide digs in the ribs of unwitting Premier League centre-halves, as well as him being generally better utilised by a manager that truly understood his skill-set.

Some strikers capitalise on the fear of the unknown to elicit panic in defenders through unpredictability. But Davies was different. The danger in dealing with him was in knowing exactly what to expect: a battle. And not one he would quantify through the traditional means of goals or even shots, but in providing an attacking outlet, holding the ball up and being an all-round nuisance.

A record of 88 goals across 15 top-flight seasons would not ordinarily be cause for cult-hero status and adoration as a striker, but that longevity speaks to a player carrying out a particular role more effectively than anyone else could. That’s *England international* Kevin Davies to you.

8) Ivica Olic
Though not without his share of important goals, Ivica Olic was rarely the designated driver of any attack outside of his native clubs. At CSKA Moscow there was Vagner Love and Jo. For Hamburg, Rafael van der Vaart and Paolo Guerrero. Arjen Robben, Marios Gomez and Mandzukic and even Darijo Srna had better records for Bayern Munich and Croatia.

But anyone could see his worth to whichever squad was lucky enough to have him. Olic was tireless and tenacious, selfless forward rather than centre-forward, and a quite wonderful complement to any attack.

Take Louis van Gaal’s reaction to his Champions League semi-final hat-trick against Lyon in 2010. “He scored three goals, he pressed high on the pitch as well, which is important in our organisation. He scored three goals but it is because he is the closest player to the goal. I’m sorry, but that’s the way I think.”

It’s enough to bring a tear to the eye.

7) Olivier Giroud
It is, in many ways, an unfair characterisation: Olivier Giroud scored more than 100 goals for Arsenal in just over 250 appearances, shared the Ligue Un Golden Boot as champion with Montpellier in 2012 and might yet declare on a Premier League century.

That reputation exists for a reason, though. It became a point of intense debate in 2018 when he led France to World Cup glory despite going the entire tournament without a single shot on target. Some saw a waste of a starting place in an otherwise thrilling team; Antoine Griezmann credited someone who put teammates “in the best possible position”. Eden Hazard, for what it’s worth, said Giroud was “maybe the best in the world” as a target man not two years ago. And he’s played with Christian Benteke.

6) Flemming Povlsen
The scorer of the only goal in Spain’s most recent World Cup qualifying defeat in March 1993, Flemming Povlsen actually had a solid record at international level. Yet it seems entirely fitting that five of his 62 caps and none of his 21 goals came during Denmark’s crowning achievement at Euro 1992.

He remains as revered by his country for that success – assisting the two group goals against France and John Jensen’s opener in the German-conquering final – as he does at Borussia Dortmund. Tears were shed upon his injury-enforced retirement in 1995, an elusive Bundesliga title having finally been delivered after three runners-up medals at Koln and the Westfalenstadion. The most goals he ever managed in a single club season was 13, his invaluable work-rate more than making up for any deficiencies.

5) Emile Heskey
Some artists only become truly appreciated after their time has passed. Vincent van Gogh enjoyed relatively moderate fortune as an artist during his lifetime before his work captured the posthumous zeitgeist. Emile Heskey similarly had his admirers over a career that spanned more than two decades, but his role has gained value and recognition in retirement.

There is a reason no forward in history has made more Premier League appearances, and why Alan Shearer only earned one more England cap. A couple of managers might have been misguided or misinformed but it is no coincidence that ten or so at club and expectant international level trusted him so. Heskey was far more multi-dimensional than a couple of step-overs against Algeria – or even his perennial role as Michael Owen’s sidekick – might suggest.

4) Karim Benzema
If there was one glaring current omission from this list, it might be the last witness to see Loris Karius’s career alive. Karim Benzema is a questionable inclusion as a whole but the current Pichichi runner-up qualifies on account of that 2017/18 season alone.

That was Benzema at his altruistic finest. He scored five La Liga goals, level with Casemiro and Toni Kroos, with that Champions League final strike among his 12 in all competitions. Yet he was given almost as many minutes as Luka Modric by Zinedine Zidane, who noted last year that his compatriot “contributes much more than goals and does better for others”.

As Benzema himself said at the height of his criticism in 2017: “A modern forward must do other things related to passes, movement and spaces.” Check, check and check again.

3) Gianfranco Zola
A scorer of great, often sublime goals, Gianfranco Zola was never a great goalscorer outside of the precursor to that iconic Parma side. He never got particularly close to matching league tallies of 18 and 19 in his first two seasons at The Crusaders, be that as Diego Maradona’s apprentice at Napoli or in his role as Chelsea’s master.

At Stamford Bridge in particular, Zola never was defined by goals. He won the FWA Footballer of the Year award in his first season despite being outscored by Gianluca Vialli in the Premier League and Mark Hughes in all competitions, his November 1996 arrival only partially explaining that apparent anomaly. In Chelsea’s list of all-time top scorers, he sits between Eidur Gudjohnsen and Jimmy Floyd Hasselbaink but possesses the combined popularity of both and more.

Alex Ferguson crowned the Italian a “clever little so-and-so” not because of his goal against Manchester United in February 1997, but the preceding magic that dumbfounded both Denis Irwin and Gary Pallister and captivated a country. To judge that genius in basic numbers felt crass.

2) Roberto Firmino
It feels like an age since Jurgen Klopp last referred to Roberto Firmino as Liverpool’s “engine”. That description would be no less true now than it has been at any point during their five-year Anfield association.

The Aston Villa victory was a case in point. The Reds were struggling until Firmino was introduced. His movement and selflessness created the chance from which Sadio Mane scored.

So while rival fans can point to Mason Greenwood having as many Premier League goals this season in far fewer minutes, and some may struggle to comprehend his importance, Liverpool with and without their attacking fulcrum are different teams entirely. Liverpool have four crucial players at the theoretical peak age of 28 – Firmino, Mane, Virgil van Dijk and Mo Salah – but the Brazilian will be the most difficult to replace.

1) Dennis Bergkamp
‘When you have a player like that as a coach, you do not tell him how to play football, you just try to fit him into the team in the way which allows him to express his talent to the maximum potential,’ wrote Arsene Wenger in the programme notes for Dennis Bergkamp’s testimonial.

‘His role in the team changed over the years. When I first arrived he was a goalscorer, and obsessed by scoring like may forwards are, but slowly he became more obsessed by the team and by how much he can provide. He understood that he could score less, but help the team score more.’

The numbers add up. Bergkamp reached double figures for goals in his first four Premier League seasons and never again thereafter, scoring 22 times in all competitions in 1997/98 and anything between three and ten from 1999 to 2006. But his influence was as enduring as his brilliance; only the rarest fool would have doubted that then or now.