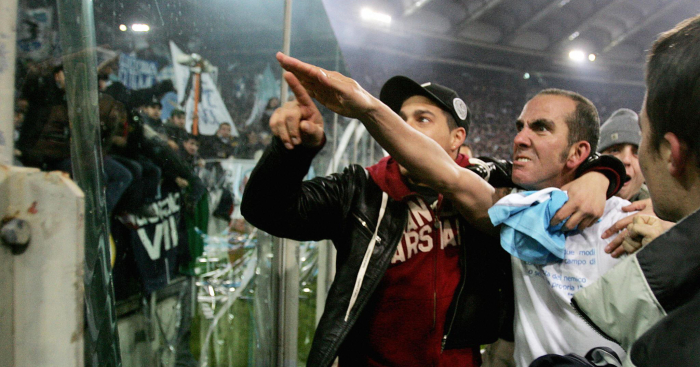 Heath Secretary Matt Hancock didn’t make himself universally popular with the Premier League when he dictated that footballers should take pay cuts to help the national COVID-19 effort. Now Boris Johnson is keen to give the nation hope with ‘Project Restart’. Is this another awkward intervention of politics in the national game?

1) Gareth Bale doesn’t know Boris…or Brexit
The Real Madrid outcast has gained a reputation for spending his free time away from the squad. Thibaut Courtois has nicknamed him “the golfer”, after all. And it seems Gareth has not used the time to catch up on current affairs. In October, he said: “I don’t even know who the Prime Minister is anymore. I haven’t got a clue. Boris Johnson? Well, there you go. I didn’t know that. I thought he was the mayor?”

The bubble of football means he knew nothing of “99 per cent of Brexit,” either. Which begs the question: what was the one per cent? The nearest EU golf course?

2) Mo Salah checks out on Chechen solidarity
The Liverpool star is no stranger to Egyptian politics, having recently spoken out against plans in his home country to export stray cats and dogs abroad. However, things got very serious when it was reported the forward was threatening to quit the national team after being used as a political symbol by the Chechen government during the build-up to the 2018 World Cup.

Salah said he was particularly annoyed with a team banquet hosted by Chechen leader Ramzan Kadyrov, who used the dinner to grant him “honorary citizenship”. Add this to the ongoing image rights row with the Egyptian FA and sitting in front of WWE grappler Sergio Ramos at the 2018 Champions League draw ceremony, he has probably got a master’s degree in diplomacy by now.

3) German fans gang up on Gundogan and Ozil
When Mesut Özil and Ilkay Gundogan posed alongside Turkish president Recep Tayyip Erdogan during a 2018 election campaign visit to London’s Turk community, it lit a huge political row about national identity.

The Arsenal and City stars were subsequently booed by fans at friendly games against Austria and Saudi Arabia as tensions built in the camp ahead of a disastrous World Cup campaign.

“I am German when we win, but I am an immigrant when we lose,” Ozil said when he quit the national team days after Germany crashed out of Russia 2018. Gundogan defended himself too saying that he “honours German values 100%” and never intended the picture to be a show of political support.

4) David Cameron is forever blowing bubbles – in Birmingham
The man who started the Brexit ball rolling, David Cameron had another “brain fade” when he seemed to forget who he supported during the election campaign in 2015. The former PM said: “You can support Man Utd, the Windies and Team GB all at the same time. Of course, I’d rather you supported West Ham.” He later corrected himself: “I’m a Villa fan…I must have been overcome by something…this morning. But there we are, these things sometimes happen when you are on the stump.”

He later apologised to Villa fans, insisting that he was thinking about the cricket. Well, they did lose the 2015 FA Cup final by a cricket score to Arsenal.

5) Paolo Di Canio marches on Sunderland
David Miliband (the slightly less awkward one that lost the Labour leader gig to his Leeds-loving brother) resigned from the Sunderland board in 2013 over coach Paolo Di Canio’s “past political statements”.

Di Canio has had his moments, like the raised-arm salute to a group of Lazio Ultras in 2005. His perception that Mussolini was a “very principled ethical individual” might not be guided by the science, to use a current phrase. Especially when he was suspended from his role as a Sky Italia pundit in 2016 after showing on air a tattoo referring to the former Italian dictator.

Still, as Paulo said in his defence: “This is not the Houses of Parliament.”

The powers-that-be reckoned that bad news would surely be crushed after victory for Neymar and company.

Five minutes after Brazil lost 2-1 to a De Bruyne stunner, riots began in the streets.

“They thought Brazil would win and while people took to the streets to celebrate, you would have some protests over the gas, but not like this,” said Senator Patrice Dumont. Oh dear.

7) Labour’s love lost after England beaten by West Germany
England famously misplaced a two-goal lead to West Germany in the quarter-finals of the 1970 World Cup, a mere four days before Harold Wilson lost his job as Prime Minister.

The pipe-smoking Wilson looked as safe as houses with a country buoyed by the prospect of a second consecutive World Cup trophy. But at a massed factory gate meeting in Birmingham on the day after England’s exit, jobs and education were way down the list as the home secretary was asked about whether Sir Alf Ramsey or late, great keeper Peter Bonetti was more at fault for the 3-2 defeat. Labour lost the election and football didn’t come home.

8) Iran and USA make hostile environment
When Iran were drawn with USA at France ’98, the US Soccer Federation called it “the mother of all games”.

Tensions began with the pre-game handshake, with Ayatollah Ali Khamenei insisting that the American players should walk over to their counterparts rather than follow the normal protocol. In the game itself, Iran went 2-0 with six minutes to go and although the US pulled one back, they were eliminated as Tehran went crazy.

The win prompted Khamenei to say: “Tonight, again, the strong and arrogant opponent felt the bitter taste of defeat at your hands.” US defender Jeff Agoos took a more diplomatic line: “We did more in 90 minutes than the politicians did in 20 years.”

Salvini, an AC Milan supporter, was in the stands at Rome’s Stadio Olimpico as Lazio snatched a last-gasp draw. “We had at least three who were exhausted with the heavy rain and the muddy pitch. Can someone explain this Gattuso stubbornness to me?” he mused.

Asked about Salvini’s comments, the feisty ex-midfielder said: “I don’t talk about politics because I don’t understand anything.”

The Deputy PM later retracted his comments, insisting: “Gattuso is the best coach that Milan can have and I spoke as a fan.” Not that good, as he departed by mutual consent last May.

10) Theresa May plays the holding role at No. 10
At the start of an EU Summit in Brussels on the day of the England and Belgium 2018 World Cup group-stage game, Theresa May was ambushed by her counterpart, Charles Michel, who presented her with a number 10 shirt of the Red Devils.

May held it up, before quickly realising that might not be seen as universal backing for Gareth Southgate’s boys. She soon stashed it away, much to the amusement of French president, Emmanuel Macron.

Mrs May later returned the favour with an England replica shirt, oddly pronouncing it as “the equaliser”. Unfortunately, the national team couldn’t find one in the game itself, losing 1-0.