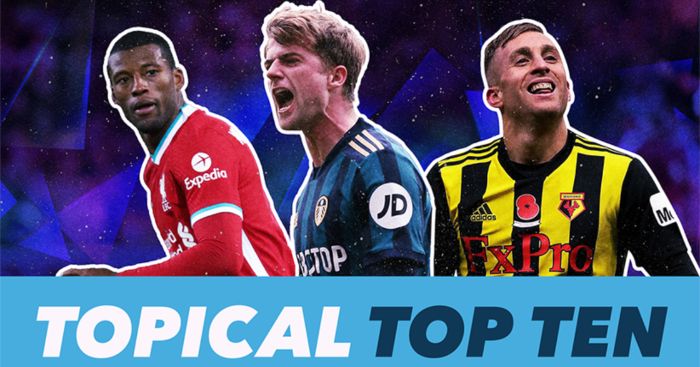 It took Georginio Wijnaldum 111 Premier League games for Liverpool to match his goalscoring exploits in just one season at Newcastle. The Dutchman plundered 11 goals from a far more advanced and adventurous position during an ultimately doomed first campaign in England, all of which came at St James’ Park with four arriving on one mid-October afternoon.

Newcastle had not won a single league game all season until they welcomed Norwich – archetypal victims of a Premier League hat-trick – to the north east in their ninth game. They would soon become what one can only assume to be the first and only team to ever concede and score six goals in successive matches, inspiring some wonderful headlines.

Wijnaldum’s first was a clever finish and his second a fine header, with more than a hint of the Barcelona at Anfields about the run, jump and placement of his third. A heavy deflection on his fourth did little to take away from the second biggest achievement of that day, Moussa Sissoko’s hat-trick of assists taking understandable precedence.

“I’ve been getting booed since the first game,” said Kevin Lisbie on September 25, 2003. “I’ve no idea why. Maybe they think I’m the worst player on the pitch. The crowd started 80 minutes into the season and it was almost like they’d been waiting for the opportunity. It was very hurtful, particularly given the fact I’ve been here for seven years. I don’t know if it will stop but I hope it does.”

It certainly did three days later, to be replaced by disbelieving cheers as the striker dominated a team that would be crowned European champions 20 months later on his second Premier League start of the season. Vladimir Smicer gave Liverpool an early lead and Michael Owen equalised in the 51st minute after Lisbie’s unlikely double. But he absolutely saved the best until last, collecting a Dean Kiely throw in his own half to embarrass Steve Finnan before scoring a genuinely excellent goal from 25 yards or so.

The mixture of relief and joy was palpable from a player who never scored more than five goals in a single Premier League season but had managed three in one game against a team with title ambitions. As one Charlton fan was purported to have said: “I never thought I’d live to see a Kevin Lisbie hat-trick”.

Roberto Martinez’s first season as Wigan manager should probably go down as one of the most historically important reigns in Premier League history. There were two 5-0 defeats to Manchester United, a 9-1 reverse at Tottenham and a 4-0 thrashing by Bolton, interspersed between victories over Liverpool, Arsenal and Chelsea, who crowned their championship win by beating the Latics 8-0 on the final day.

Also included was a 4-0 humbling at Portsmouth, for whom Paul Hart was in the dugout and the looming spectre of director of football Avram Grant was in the stands. He would take over as manager in November, but not before Aruna Dindane scored the first, second and third goals of his short Premier League career. Frederic Piquionne and Nwankwo Kanu were perfect foils as a defence of Scharner, Boyce, Bramble and Melchiot were put to the sword. Shocking.

There is clearly something about the opening couple of months of a Premier League season that brings out the very best in those one might least expect it from. While teams are still trying to figure each other out some strikers positively revel in the ensuing uncertainty.

That only goes some way towards explaining Patrick Bamford’s expert dismantling of Aston Villa. The 27-year-old had scored one goal in 27 Premier League games across spells for four different clubs before the 2020/21 season brought him and Leeds back into the top flight. He and they would certainly have taken ‘shades of Dennis Bergkamp’ if offered in the summer.

Four players have scored a Premier League hat-trick under the management of David Moyes. Steve Watson blazed a trail that only Yakubu Aiyegbeni, Louis Saha and Michail Antonio have followed in the near two decades since.

The former Newcastle Entertainer occupied that very role for Everton early in the 2003/04 season with what might be one of the most underrated trebles in history. His first strike was a ferocious finish after a one-two with Duncan Ferguson, followed by the belittling of a stray Paul Robinson from 35 yards and a delightful lob from an angle to complete the job. Wayne Rooney was on the bench at Goodison Park while Jermaine Pennant, who had notched an unlikely hat-trick four months prior for Arsenal against Southampton, came off at half-time during an unhappy Leeds loan.

2019 was a weird year for Premier League hat-tricks. The only obvious inclusions on a list of such scorers were Sergio Aguero, Raheem Sterling and Jamie Vardy. The rest, from Diogo Jota in January to Christian Pulisic in October, and Lucas Moura, Ayoze Perez, Teemu Pukki and Tammy Abraham in between, was an eclectic selection.

None more so than Gerard Deulofeu, who benefited from some welcoming Cardiff defending to race through on goal unmarked twice against Neil Warnock’s side one crisp winter evening. That result put Watford seventh; Javi Gracia was out of a job seven months later.

In a tantalising taste of an iconic future, Sam Allardyce flicked through his contacts book to stave off relegation in his first season as a top-flight manager. The Trotters had been in the Premier League twice before but were sent straight back down each time. A run of three wins – one away at Manchester United – in 27 games from September 8 to March 16 – seemed to consign them to a similar fate. But some mid-season additions proved pivotal. Bruno N’Gotty, Derek Niven, Gerald Forschelet, Stig Tofting, Youri Djorkaeff, Mario Espartero and Kostas Konstantinidis were all brought in to varying degrees of success. Fredi Bobic might have been most important of all in the short-term.

The German started the campaign at Borussia Dortmund, featuring in the Champions League group stages against Liverpool but struggling for meaningful minutes. A few months at Bolton appealed and while he would score only four goals, each were crucial. He opened his account with a 40th-minute equaliser in a 3-2 win over Aston Villa in late March, before an industrial hat-trick against Ipswich the following week essentially sent the Tractor Boys down and kept Bolton up. Bobic would not stay in England beyond that loan but provided memories that will endure for generations.

Fewest total Premier League goals for a player who has scored a hat-trick in the competition:

“I’m a great team man but within the team there’s always personal glories,” said Andy Sinton two and a half decades after his most impressive. “I played 700 odd games and I only scored one hat-trick so that is very special to me. Some people don’t score hat-tricks, some people score loads, that was my only one and I’ve still got the match ball.”

He was the beneficiary of some questionable Everton conduct in the inaugural Premier League season. Neville Southall was dismissed after 20 minutes at Loftus Road for handling the ball outside his area, with Paul Rideout compounding that decision by kicking out at Darren Peacock to receive a red card of his own after 45 minutes. Sinton already had his first by then but exploited the two-man advantage to great effect thereafter.

What a 76th birthday present for Dave Whelan, who presumably stopped regaling those who would listen about how his leg was broken in the 1960 FA Cup final just long enough to catch Jordi Gomez completing what might forever remain Wigan’s last Premier League hat-trick in stoppage-time against Reading in November 2012.

The midfielder’s five full seasons of top-flight football in England garnered one, one, five, three and four goals respectively, yet he still managed to squeeze in three in one game against a Reading side bound for the same destiny as Wigan themselves: relegation to the Championship. Gomez was only the second Spaniard to even score a Premier League hat-trick after Fernando Torres, beating Santi Cazorla to that accolade by little over three weeks.

It requires a special player to break one of the cardinal rules of player ratings. A hat-trick goalscorer gets at least 9/10 – more than deserved the match ball – as an automatic rule.

Not Somen Tchoyi, the holy spirit of Premier League final matchdays. His treble against Newcastle to conclude the 2010/11 season, affectionately and hilariously known by West Brom fans as Tchoyi Story 3, was only enough for an 8/10 from the unforgiving Birmingham Mail.

The Baggies had trailed with less than half an hour remaining until the Cameroonian decided enough was enough. Newcastle were suddenly powerless to stop Tchoyi, who made up for the fact he was a striker wearing the number 5 shirt by completing his hat-trick the only justifiable way: with a diving header that bounced before it went in.

At HT in that game I walked past a normally mild-mannered ex-Albion player working for radio who was apoplectic. “Tchoyi, f***ing useless, get him off!” And he was right.
An hour later, however….

My office made me give him man of the match when I didn’t want to!