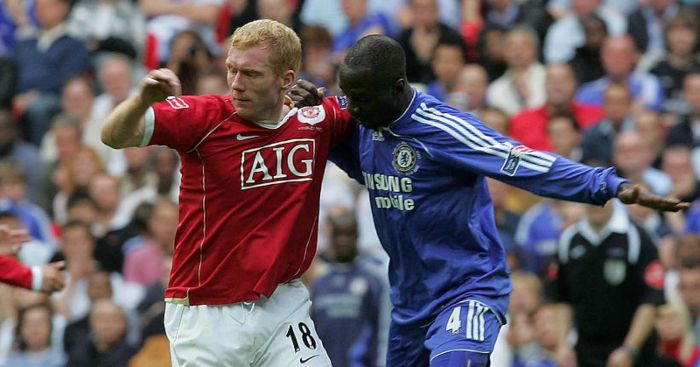 So Curtis Woodhouse gave us the perfect idea: why not invite an obviously unhealthy level of abuse from Man Utd fans and others for having an opinion? It really does seem quite fun.

As a result, we thought we’d compile a list of ten of the most overrated players ever. That does not, of course, mean that we are calling them bad by any means. But I could literally type anything here and no-one but the sub-editor would notice as everyone has already scrambled to the comments section to call me a bias nonce. My Twitter is here, if you’d prefer.

Let’s pull the pin on this grenade and scurry off, shall we?

10) Hulk
It would be interesting to see how far Givanildo Vieira de Sousa might have progressed, what sort of indelible mark the Brazilian could have left on football, if his father had not come to appreciate the acting stylings of Lou Ferrigno. As it is, Hulk provides a useful case study into the importance of marketing in sport.

While playing outside Europe’s more visible and popular leagues tends to count against most, Hulk’s reputation actually benefited from time spent on the outskirts. His career has thus far consisted of money-spinning spells in his native Brazil, Japan, Portugal, Russia and China, helping retain that novelty of a literal superhero-inspired footballer with a shot as powerful as the carefully cultivated caricature.

Aside from a scintillating 2010/11 season for Porto, the 33-year-old was rarely as good as his generous highlight reels claimed. He scored one competitive goal for Brazil in 53 games – and that was in a losing effort at the Olympics – while never progressing beyond the last-16 stage of the Champions League. A cumulative €134.3m in transfer fees suggests a far greater impact and skill level than he ever actually displayed.

9) Hidetoshi Nakata
It is probably churlish to point out that Hidetoshi Nakata never scored more than ten goals in any of his 12 seasons, and only managed more than five twice. He played in fits and starts, going through entire weeks and months of anonymous performances that belied his stratospheric notoriety. But that was never really the point.

He was not terrible in any sense. The display to salvage a draw at Juventus in May 2001 helped deliver Roma their long-awaited Scudetto, with The Old Lady mugged again by Nakata and Parma in the 2002 Coppa Italia final. That said, he was little more than average at best, the right player in the right place at the right time to capture the imagination of a previously untapped Asian market just before the turn of the millennium.

8) Paul Scholes
Oh boy. This could go about as well as one of his patented tackles, but Paul Scholes was never as enduringly and endearingly generational as a reputation augmented in retirement would have many believe. ‘It is at this time of year I get asked, “Wouldn’t you like to have won the Ballon d’Or?”,’ the Man Utd legend once wrote of an award for which he received fewer career votes than Jamie Carragher.

The almost inevitable romanticism of a one-club man dictating tempo from deep rather overlooks the fact he would settle on and in that role regrettably late. His primitive years at Man Utd were spent moonlighting for Eric Cantona in a more attacking position, and even after first establishing himself in central midfield during the 1997/98 season, he would often be rotated for Nicky Butt and was again moved to accommodate the newly signed Juan Sebastian Veron in 2001. Scholes was sublime and perhaps at his absolute best by his mid 30s but spent much more time breathlessly scaling the mountain than he did nonchalantly atop the summit.

The numerous quotes of admiration from his peers and training-ground anecdotes about effortlessly kicking balls through the windows of potentially visually impaired drivers on 30-mile trips around Durham tell a charming story, if an incomplete one. Scholes was obviously phenomenal – only a fool would argue with that – but a player arguably under-appreciated outside of that Man Utd sphere during his career has become overrated by the rest in retirement.

7) Neymar
Some of the feats are astonishing. His record for Brazil is genuinely ludicrous, he is scoring at a rate of close to a goal a game in France and the Champions League trophy in 2015 was accompanied by a goal in the final and share of the Golden Boot alongside Lionel Messi and Cristiano Ronaldo. But in trying to break free from their combined shadows and enjoy the podium to himself, Neymar has done more damage than good.

His failure to legitimise France as a league on par with those in Spain, England, Italy and Germany – a fair expectation of the most expensive footballer in history – has been compounded by the brilliance of Kylian Mbappe: a younger, less abrasive and more viscerally appealing talent. While waiting to be crowned the best when two of the game’s greatest ever players finally hang up their boots, Neymar has instead already been usurped and reduced to a Manchester United-haunted meme whose injury absences often happen to coincide with his and his sister’s birthdays.

6) Philippe Coutinho
Forgive me, father, for I have risked being grouped with Stan Collymore. His critique of ‘flat-track bully’ Philippe Coutinho remains patently ridiculous, but the wider message of a player whose standing outweighs his ability and influence does carry some merit. At no stage in his entire Liverpool career was Coutinho the best or most important player at Anfield – and that is no revision of history.

He was, however, incredibly eye-catching. Those speculative shots, mazy runs and audacious flicks somehow convinced Barcelona that he was one of the finest talents in the world. That was never really the case for a player afflicted by the same issue as James Rodriguez: of having no obvious fixed position. He would still improve Arsenal, though.

5) Georgi Kinkladze
It can be impossible to view certain players in hindsight without losing context. Georgi Kinkladze will always hold a particular place in the hearts and minds of Manchester City fans, the diamond found even in their roughest period. He rejected interest from Barcelona, Liverpool and Inter Milan to accompany his adopted family all the way down to the third tier. Yet his solitary Premier League season at Maine Road resulted in four goals, four assists and relegation.

There remains a childhood desire to have seen Kinkladze in the club’s modern era, surrounded by better players and a more accommodating system. But it is either overestimating the Georgian or undervaluing the current side to suggest he would have held his own. Joe Royle once declared that “there was too much about the whole Kinkladze cult phenomenon that wasn’t right”. When you consider that some had him on a par with the stylistically similar but clearly superior Juninho, you can see his point.

“I don’t like holding midfield players. I like players to understand that if one goes forward, the other one tucks in for them. I don’t want someone who just sits in front of the back four and doesn’t go anywhere. I was saying to William Gallas when he was here, the worst thing that happened in this league was Claude Makelele.

“When Makelele came into this country he wasn’t a holding midfield player. He was a player who had the intelligence to say ‘Frank [Lampard], you can score more goals than me so if you go I’m going to tuck in here for you, and I’ll hold. You keep going forward’.”

Les Ferdinand knows. Claude Makelele was excellent and crucial to three title-winning sides. But worthy of an entire role being named in his honour when there have been better defensive midfield players before and since? He is not even the greatest French Chelsea player in that position. Whatever happened to Tiemoue Bakayoko?

3) Roberto Carlos
The physical manifestation of a child being asked whether he wants to play in defence, midfield or attack and responding with a frantic nod, Roberto Carlos was something of a contradiction before full-backs known only for their contributions going forward became fashionable.

That is no exaggeration. While compilation videos offer countless clips of lung-bursting runs and physics-bending shots, there is scant proof that the Brazilian ever really bothered defending. A couple of last-ditch tackles when tracking back from the opposition half and a hilarious moment in which he outjumps Jan Koller for a header is all an extensive two-minute search could find. And even on the occasions he did try, it backfired.

Forgive the facetiousness. Although it should also be said that his most memorable moment was either a weather-related “miracle” or, in the case of Zinedine Zidane’s 2002 Champions League final goal, a self-professed “more or less bad” cross. Roy Hodgson tried to convert him into a winger at Inter Milan before Roberto Carlos went off to Real Madrid in a huff, and he could never be wrong.

2) David Ginola
Alongside David Ginola on 21 Premier League goals are Robert Huth, Paul Scharner and Steve Sidwell. Beating his tally of 42 assists, meanwhile, are Ruel Fox, Jason Wilcox and Stuart Ripley. A Frenchman with the middle names Desire Marc, who has endorsed shavers, coffee, hair products and cars, will doubtless care not for substance over style. But the numbers for an ostensibly attacking player really do make for stark reading.

Yet he is held in high regard by two different Premier League fanbases, a stalwart of one of the competition’s most revered teams in The Entertainers, and a PFA Player of the Year winner in 1998/99, when he scored in literally one league win for Tottenham all season but managed to time his form perfectly for the ballot. Johan Cruyff once supposedly labelled him the best footballer in the world; at no stage could he have been genuinely considered even close to that.

1) Pele
The problem with being considered the greatest player of all time is that you are allowed no breathing space. Pele must therefore have been indulging in some Pfizer-enhanced auto-erotic asphyxia as far back as 2000, when he stated: “In music there is Beethoven and the rest. In football, there is Pele and the rest.”

It is pretty futile in a sense to argue against his case. One would have to be around 70 now to have first-hand experience of his brilliance and global renown. For someone who was born when he was 14 years into his retirement to start picking holes in his career is a laughably absurd concept that would never make it to print.

But he wasn’t Brazil’s best player at either the 1958 or 1970 World Cups, was injured for most of the 1962 victory, and needlessly padded his otherwise breathtaking statistics with unofficial friendlies and the like. Heleno de Freitas and Garrincha were potentially as good but both prove that Pele was a beneficiary of circumstances, too. The former was born too early to capitalise on the advent of TV broadcasting in the middle of the 20th century, while the latter was not interested in rampant self-promotion. Pele straddled those sectors to parlay footballing excellence into transcendent immortality.