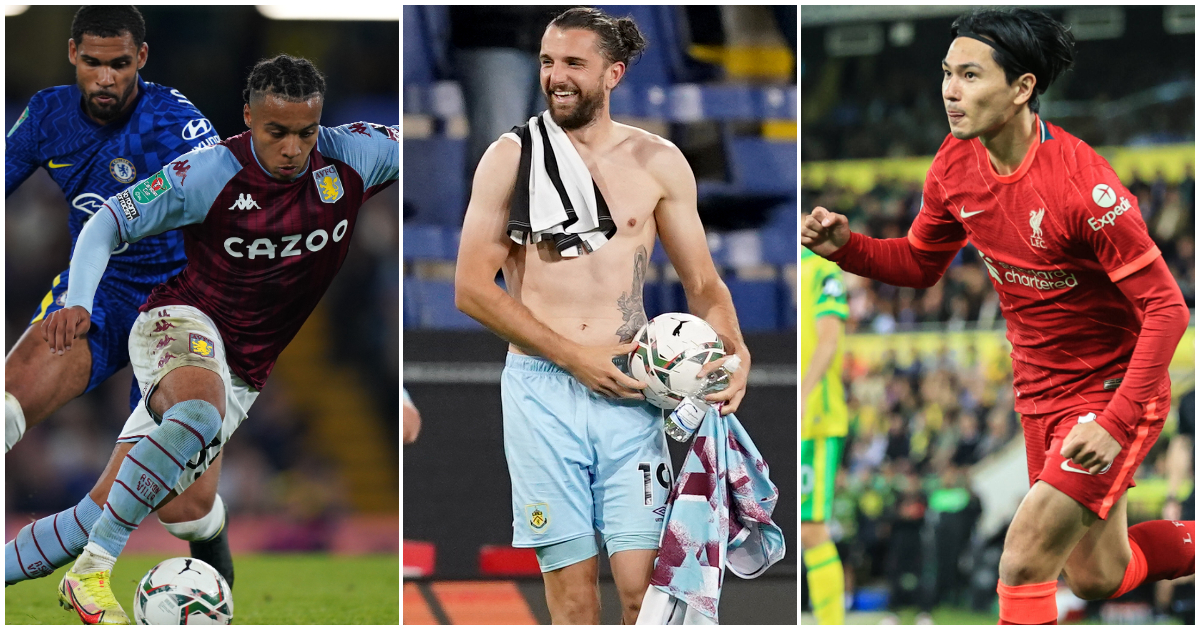 The Carabao Cup gave plenty of Premier League fringe players the chance to enhance their prospects. Here are ten who seized that opportunity in the third round…

Oliver Skipp
The Tottenham midfielder responded to being dropped against Chelsea by turning in his best performance of the season in the centre of Nuno’s midfield at Wolves.

Skipp had started every Premier League game for Spurs prior to the weekend, when he was relegated to the bench for Tanguy Ndombele to come in for the first time this season. But the pair teamed up with Dele Alli – who looked as sharp as he has for some time – with Skipp at the heart of most of what was good about Spurs.

The 21-year-old won the ball back on both occasions in the build-up to Spurs’ goals and his all-round display gave Nuno plenty to ponder before he picks his XI for the north London derby at the Emirates on Sunday.

Whatever happens during the rest of this game Oliver Skipp has been class. Ruislip's finest.

Cameron Archer
The young Villa striker bagged a hat-trick on his full debut in the last round at Barrow and Dean Smith demonstrated his faith in Archer by not only starting him against the European champions but also resisting the temptation to have a more senior striker on the bench in reserve.

Archer proved that Smith’s faith was well placed. The 20-year-old was a persistent pain for Chelsea, who could have been 2-0 down had the striker taken two first-half chances that came about because of his clever movement.

After a couple of sighters, Archer’s eye was in when Matty Cash landed a cross from the right onto his head. A bullet header whizzed past Kepa into the top corner to highlight why Villa are so keen to tie down the forward before his contract expires at the end of the season.

Aaron Connolly
It’s been a wretched 2021 for the Brighton forward, but Connolly used his first start of the season to remind Graham Potter of what he can offer.

The Republic of Ireland international hadn’t scored since January 2 prior to the first of his two strikes against Swansea. His opener took a hefty deflection but it seemed to take a weight of the 21-year-old’s shoulders, with his second just five minutes later displaying the confidence and cockiness Connolly first showed when he broke into the Brighton first team.

Alexis MacAllister deserves a mention too for a couple of assists while playing as Potter’s most central forward, but Connolly was the Seagull who best enhanced his first-team prospects.

Ruben Loftus-Cheek
Since Loftus-Cheek’s only action so far this season is a few moments at the end of Chelsea’s Champions League win over Zenit, the former England midfielder could be forgiven for appearing a little rusty.

But Loftus-Cheek was Chelsea’s brightest star in midfield. Thomas Tuchel employed the 25-year-old in a deeper position than he is normally accustomed, taking Jorginho’s responsibilities with N’Golo Kane to his right and Saul to his left.

There were occasions when Loftus-Cheek was caught out positionally, which is understandable, but his forward passing and drive in possession made a very positive overall impression. With Saul struggling to adapt quickly to the English game, Loftus-Cheek’s performance likely moves him up to first reserve when Tuchel wants to freshen up his first-choice midfield three.

Daniel Podence
The Wolves winger can’t do much more to convince Bruno Lage that he is worthy of a start in the Premier League, especially while his Wolves team-mates continue to fire blanks.

Podence started for the second time this season – his other opportunity came in the Carabao Cup when he scored against Forest – and the 25-year-old repeated the trick with a clinical finish to level against Spurs after Tanguy Ndombele had boobed again.

Many Wolves fans are now calling for Podence to be given his first Premier League start of the season at Southampton on Saturday, with Trincao seemingly most vulnerable.

Takumi Minamino
There were plenty in Liverpool red at Carrow Road who furthered their first-team chances in the 3-0 win Carrow Road. Kaide Gordon showed he is ready for senior football on his debut; Divock Origi did a goal; Naby Keita followed his stunning strike on Saturday with a dominant 45 minutes; Caoimhin Kelleher cemented his position as Alisson’s back-up with a solid display and a penalty save.

But Minamino’s brace was the most eye-catching contribution of the evening. The Japan international demonstrated his versatility by thriving off the left flank and in midfield, while showcasing his technical quality with two wonderfully taken goals.

Minamino is returning from a thigh injury sustained on international duty and needed to impress upon Klopp that he can contribute to his first XI, something that was not lost on the manager.

Jay Rodriguez
If the Burnley forward was playing for a place in Sean Dyche’s XI this weekend, four goals ought to do it.

Rodriguez netted a 12-minute hat-trick before later adding a fourth at Turf Moor after Rochdale had take a surprise lead. It means the 32-year-old has now scored more goals than the rest of the Burnley squad combined this season.

Dyche certainly has a decision to make before Saturday’s trip to Leicester. Burnley have been pretty hopeless going forward this term and those attacking struggles have left them winless after five matches. Chris Wood is certain to keep his place but Ashley Barnes has not had a good start to the season. Rodriguez surely deserves a chance to start for the first time in the Premier League since the opening day of the season.

Marcus Forss
The Brentford striker had a hat-trick before Rodriguez bagged his first and Forss helped himself to a fourth too while the Bees picked the bones out of the Oldham carcass.

It was the striker’s first appearance since the second-round win over Forest Green and Forss did his prospects no harm whatsoever.

Unlike Rodriguez, Forss has little prospect of a Premier League start this weekend, but the Finn at least demonstrated to Thomas Frank that he is ready to deputise should Brentford suffer any injuries to their first-choice strikers.

Cole Palmer
Pep Guardiola rang the changes for Manchester City’s clash with Wycombe by selecting a team of two halves. The back four was made up entirely of academy players, with their shirt numbers adding up to 326. No.90, Romeo Lavia, also featured in midfield, but ahead of those youngsters were more familiar names like Kevin De Bruyne, Phil Foden, Riyad Mahrez, Ferran Torres and Raheem Sterling.

Palmer, though, did his best to wrestle headlines away from Phil Foden after scoring his first professional goal to complete a 6-1 rout. Coming on the back of his Premier League debut against Norwich and his strike for England Under-21s, it rounded off a superb few weeks for the 19-year-old.

Guardiola has already spoken gushingly over Palmer: “He will be an exceptional player. He’s an incredible young lad. He is a guy who finishes incredibly like Foden.”

The turn and the finish 👌

A superb goal from Cole Palmer to help our #YoungLions to victory against Kosovo! pic.twitter.com/YYNKkVIWBU

Ibrahima Diallo
The Southampton midfielder did his prospects of a first Premier League start of the season no harm whatsoever with his first career goal in the draw and subsequent shootout win at Sheffield United.

Diallo had featured in all of Saints’ league games before the draw with City on Saturday but only as a substitute. At Bramall Lane, the 22-year-old was in from the start and his goal was just reward for an all-round positive display in the heart of Ralph Hasenhuttl’s midfield.

The £12million signing from Brest last October was an infrequent presence in Saints engine room last season but this performance can only impress upon Hassenhuttl that Diallo is ready for more responsibility after almost a year at St Mary’s.