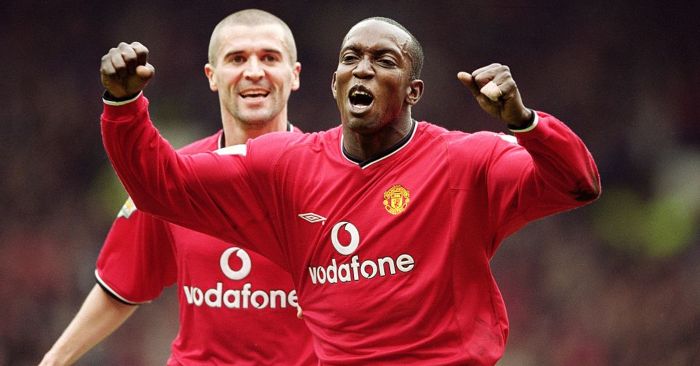 The proliferation of World XIs got us thinking: which players are or have been their country’s only world-class representative ever? And is Daniel Cousin actually better than Pierre-Emerick Aubameyang?

10) Jose Luis Chilavert (Paraguay)
A country that has produced two Copa America-winning squads and six finishes as runners-up should perhaps boast more historic talents over more than a century. Roque Santa Cruz, Carlos Gamarra, Francisco Arce and Jose Cardozo all enjoyed their moments in the sun but none shone quite so bright as Jose Luis Chilavert.

There were only two permanent members of the IFFHS’ World’s Best Goalkeeper of the Year top four from 1995 to 2000. To share that sort of platform with Peter Schmeichel spoke of Chilavert’s enduring brilliance; he won the award three times compared to the Dane’s twice.

His reputation preceded him at times. Chilavert was doubtlessly excellent at the 1998 World Cup, conceding only once in the group stage before his heroic efforts in forcing eventual winners France to extra-time in the round of 16. Laurent Blanc ended his resistance with a Golden Goal but Chilavert was still voted the tournament’s best keeper.

He also ranks joint-24th all-time for Paraguay goals, and won trophies in four different countries. It sums him up quite neatly that he kept a clean sheet in the 2001 Coupe de France final before saving one penalty and scoring the winner for Strasbourg in the subsequent shoot-out.

Their top goalscorer ever has not quite translated that into tournament success but that rather emphasises the gap Aubameyang has established in the Panthers’ food chain. When a player can parlay their importance into public disputes with their country’s FA over professionalism and inadequate facilities and emerge with their reputation boosted in the eyes of the fans upon their return, it speaks volumes.

8) Jan Oblak (Slovenia)
The correlation was dismissed but the timing was telling: Slovenia dispensed with Tomaz Kavcic in October 2018 within days of the manager accusing Jan Oblak of refusing to speak to him and “telling lies” about his availability.

Oblak has only recently settled into the national team set-up, but his standing at club level has barely wavered for the better part of a decade. One year in his native country was followed by four honing his trade in Portugal and six as the continent’s most consistent performer at Atletico Madrid. A record of 133 clean sheets in 252 games has certainly not caught the eye of only Alisson.

7) Bruce Grobbelaar (Zimbabwe)
The first African player to win the European Cup more than earned that status. Bruce Grobbelaar was a one-time Rhodesia international in the midst of his controversial Zimbabwe exile when he goaded Bruno Conti and mocked Francesco Graziani to guide Liverpool past Roma on penalties in 1984.

It secured the keeper another medal to go alongside his six First Division titles, three FA Cups and three League Cups, won over a 13-year spell that coincided with the greatest in Liverpool’s history. Grobbelaar had his moments and eccentricities but Bob Paisley, Joe Fagan and Kenny Dalglish each retained him as their lynchpin for a reason.

6) Dwight Yorke (Trinidad & Tobago)
Oft forgotten is that the best individual campaign within the greatest team season in Premier League history was delivered by a player who began it at Aston Villa. It took Dwight Yorke one disinterested performance in a 0-0 draw with Everton for John Gregory to forget threats of office-based firearm violence and accept Manchester United’s £12.6m bid in August 1998.

The seventh man to join the Premier League’s 100 goals club was its only non-European member until Sergio Aguero crashed the party in 2017. Yorke might have been outscored by Stern John, Russell Latapy and Kenwyne Jones for his country but neither Trinidad nor Tobago has conjured as brilliant a player before or since.

5) Gheorge Hagi (Romania)
Fifteen years separated Gheorge Hagi’s first and record-breaking final vote as Romanian Footballer of the Year. Victory with the lesser known Sportul Studențesc in 1985 triggered dominance in the latter half of that decade and the entire 1990s that culminated with his seventh crowning in 2000 at Galatasaray.

The Maradona of the Carpathians almost admirably avoided capping his wonderful career with European glory. He joined Steaua Bucharest months after they wrestled the continent into submission in 1986, reaching the semi-finals and final in successive seasons before joining Real Madrid in their lengthy barren years. After a spell with Brescia, he moved onto Barcelona, who had just finished as runners-up in 1994 but were so thoroughly humbled they would not reach that stage again for another 12 years.

But Hagi achieved plenty in almost two decades, once finishing fourth in a Ballon d’Or vote, being named in a World Cup team of the tournament and being sent off in a UEFA Cup final for cuddlethumping Tony Adams. He remains the highest scorer in Romania history, and the father of the greatest Rangers player ever.

4) Lev Yashin (Russia)
To be your position’s only winning representative of a European-wide award in more than 60 years is a remarkable feat. And Lev Yashin truly was a remarkable player, transcending goalkeeping preconceptions and helping to establish precisely what can be expected from the men between the sticks.

Before Yashin, keepers were known to rarely venture from their line and only ever kick the ball long to safety. His approach seems ordinary now but closing down strikers, punching crosses instead of catching and distributing the ball short and early to start counter-attacks were positively revolutionary in his time.

A European Championship-winning medal in 1960 and Olympics gold in 1956 was supplemented by a starring role in the only World Cup semi-final in the history of Russia and the Soviet Union in 1966, and even success in ice hockey when waiting for his breakthrough at Dynamo Moscow.

3) Hristo Stoichkov (Bulgaria)
“There are only two Christs; one plays for Barcelona, the other is in heaven,” was the typically humble acceptance speech delivered by Hristo Stoichkov upon his Ballon d’Or win in 1994. Bulgaria advanced past the World Cup round of 16 for the only time in their history that year, reaching the semi-finals thanks to the inimitable Golden Boot holder.

Stoichkov was sensational, unpredictable in every sense. A lifelong suspension that was handed down for fighting in the 1985 Bulgarian Cup final was later reduced to a single year on the sidelines but was symptomatic of his attitude. And for his foibles, he is often credited as the man who kept Romario grounded and focused at Barcelona. There will never be a player like him again, either for Bulgaria or anywhere else.

2) George Best (Northern Ireland)
“George inspired me when I was young,” said Diego Maradona. “I think if you talk about Europe, you talk about five or six and if you talk about his qualities he’d always be in there,” was Johan Cruyff’s answer when asked whether Best was the greatest player ever. “I often mentioned George Best as the best player in Europe,” Pele noted. More powerful eulogies from more respected peers would be difficult to find; each were speaking on the day of Best’s death in 2005.

He was, for a time, the world’s most famous footballer, and remains surely one of the most gifted. A painfully short career delivered just two First Division titles and peaked with the European Cup and Ballon d’Or a week after turning 22, his personal demons dragging him slowly downhill thereafter.

Best described international football as “recreational” for a reason. He bowed out with just 37 Northern Ireland caps and sitting below Kyle Lafferty and Iain Dowie in a list of all-time goals rather undermines his excellence. He was so clearly his country’s greatest player that it was almost laughable, although Billy Bingham’s choice not to end the Hong Kong-based 36-year-old’s five-year exile with a call-up for the 1982 World Cup was unsentimental but entirely sensible. Best never did play in any major international tournament.

1) George Weah (Liberia)
His namesake did not fare considerably better on that front. George Weah took Liberia to within a point of 2002 World Cup qualification in his mid-30s, guiding them to two Africa Cup of Nations group-stage exits and little more than moderate relevance.

To judge him on that would be futile and foolish. Weah was not only the first and, as yet, only African to win the Ballon d’Or, but the rules seemed to be changed to facilitate his ascension. It just so happened that 1995, the year of his defining football success, was the first time the award allowed votes for players born outside of, but playing in, Europe.

Weah was a worthy winner, the Champions League’s top scorer with semi-finalists PSG and then a glorious addition to a formidable Milan side. Arsene Wenger once described himself as “like a child discovering a chocolate bunny in his garden at Easter” upon signing the forward for Monaco in 1988. Weah had never played outside of Liberia by that juncture but would soon master his new surroundings.