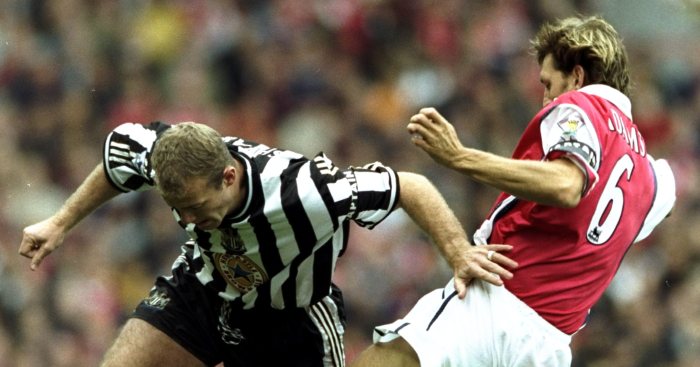 Which players from the past would solve their former club’s current problems? To prevent us from simply picking Dixie Dean because Everton need a 60-goal-a-season striker, the player must have featured for the club in this bloody century. And we’re only doing last season’s top half, because we are not utterly mad.

Manchester City – Yaya Toure
Not the version released by Pep Guardiola this summer, but the peak Yaya Toure who swung midfield battles in his favour and dominated the Premier League with power and poise. The now 35-year-old was undeniably at his best in the title-winning 2013/14 season, his goals giving Brendan Rodgers nightmares, but his skills and characteristics also lend themselves to that of a defensive midfielder. Toure tried the position numerous times at the Etihad Stadium, and was regularly used there at Barcelona. Instead of trying to teach John Stones the way of the holding midfielder, or scrabbling around for a work permit for Douglas Luiz, Guardiola would much rather have a tried and tested Toure offering cover in one position while excelling in another.

Manchester United – Gary Neville
It was just 18 months ago that Jose Mourinho declared “there is no better right-back in football” than Antonio Valencia. The strength in depth that once saw Cafu, Lilian Thuram, Javier Zanetti, Gianluca Zambrotta, Philipp Lahm and Dani Alves share the world stage in the position has undeniably decreased, but it was a saddening thought. Was a converted former Wigan winger in his 30s really the best right-back around?

Perhaps Valencia had a claim to the crown at one stage, but no longer. While Jose Mourinho has already hinted at possible fractures in a once thriving relationship, the truth is that time has simply caught up with a 33-year-old entering his 15th season as a professional. Diogo Dalot will help shoulder the burden, but the increased likelihood of Matteo Darmian staying tells its own story. United desperately miss full-backs as solid in defence as they are productive in attack. Few struck that balance better than Gary Neville at his peak.

Tottenham – Luka Modric
“For me, he is the perfect midfielder, who can play box-to-box and like a holding midfielder,” said Mauricio Pochettino of Harry Winks last September. “He has the quality and the capacity to play and use the demand of the game and read it.” The Tottenham manager would add that Winks “is completely different to our other midfielders,” and provided “more options to play in a different way”.

Winks has made no secret of the fact that he modelled his game on Luka Modric as he was making his way through the Tottenham ranks, and the apprentice will hopefully continue his journey to become the master when his infuriating injury issues abate. Until then, Tottenham lack a true controller in midfield, a player capable of consistently dictating the tempo of any game against any team. Six years ago, they had one of the best in the business.

Liverpool – Jamie Carragher
Dejan Lovren insists he is “one of the best defenders in the world”, while his critics suggest a season in which he reached a Champions League and World Cup final for club and country was a mere anomaly in an otherwise error-prone career. The truth probably lies somewhere in between: Lovren is nowhere near as bad as some insist, but is nowhere near as good as he seems to believe.

Liverpool have improved defensively, and that will surely only continue with the additions of Alisson, Fabinho and Naby Keita. But Virgil van Dijk is the more accomplished, more talented member of this defensive double act, the most likely to break out on his own or leave to seek a better partner. Liverpool have spent this summer replacing Sander Westerveld with Alisson and Steven Gerrard with Keita, while the formidable front three could hold their own in any era. The heir to Jamie Carragher’s throne is yet to step forward and claim it for himself.

Chelsea – Didier Drogba
What Maurizio Sarri would give for a goalscoring striker capable of leading the line alone. Gonzalo Higuain was the manager’s first striker at Napoli, scoring 38 goals in 42 games in 2015/16. After the Argentine’s departure for Juventus, Dries Mertens stepped into the role for the following two seasons; he scored 58 times across two campaigns.

Alvaro Morata can only hope to emulate such figures by adding a 20 to his shirt number. The Spaniard looks painfully short of confidence, and can feel Michy Batshuayi and Tammy Abraham’s lukewarm breath down his spine. Chelsea scored the fewest goals (62) of any top-six side last season, and are the only member of that sextet without a genuine, proven, elite goalscorer. Since Didier Drogba scored 37 goals in 2009/10, the closest any player has come to matching that tally for the Blues was Diego Costa (22) in 2016/17.

Morata could yet blossom and bloom as late as Drogba did at Stamford Bridge. The Ivorian struggled to 16 goals each in his first two seasons before becoming one of the most fearsome forwards around. But that feels little more than a pipe dream right now.

Arsenal – Tony Adams
Sokratis will take one spot, but there are justified question marks surrounding his central defensive partner at Arsenal. Shkodran Mustafi is likely to be given Unai Emery’s vote of confidence, but unless the German can finally translate that into his performances in north London, Arsenal could face familiar problems sooner rather than later.

With Calum Chambers gone, Rob Holding’s development stalling, Nacho Monreal returning to his role at left-back, Konstantinos Mavropanos too inexperienced and Laurent Koscielny still injured, Arsenal’s renovation is not quite complete. They need brains to match the brawn of Sokratis, sweet to balance his sour and poise to match his power. Arsenal need a “professor of defence“.

Burnley – Jay Rodriguez
“I don’t know him very well but I’m told he’s a fantastic lad as well,” said Sean Dyche in January 2017. “He’s certainly someone who is respected here for what he has done for the team and his journey through the club. Most kids around Burnley will have heard of Jay Rod and what he did here.”

If the Burnley manager gets his way, the hometown boy will soon make a triumphant return. The Clarets are targeting relegated Rodriguez for a reason, deciding that the lack of productivity from Jeff Hendrick is one of the few chinks in their tightly constructed armour. The Irishman is a dedicated workhorse but two goals and two assists in 34 games is an underwhelming return for an attacking midfielder. The infamous ‘Burnley 10’ position needs an upgrade, and Rodriguez is at the very least a slight – and attainable – step up.

Everton – Joleon Lescott
The nature of his exit was acrimonious, with David Moyes accusing Manchester City of “disgusting” behaviour. But the speed and assuredness with which Joleon Lescott first established himself at Everton was quite something. A 24-year-old plucked from the Championship for £5m soon became one of the Premier League’s most underrated defenders at Goodison Park. He was voted their Players’ Players of the Season in his first two seasons, their Player of the Season in his debut campaign, and was their joint second-top scorer in 2007/08.

Tweeting pictures of luxury cars during a 6-0 defeat and suffering two consecutive top-flight relegations – the first of which he described as “a weight off the shoulders” – has muddied his reputation over time. But Lescott in his prime was excellent, a fine defender who made up for his few deficiencies with great awareness, positioning and anticipation. How Marco Silva could do with a similar player now.

Leicester – Muzzy Izzet
Over the past two seasons, Leicester have scored 103 Premier League goals. Jamie Vardy accounts for 33, while Riyad Mahrez (18) is the only other to register double figures. Shinji Okazaki (9) and Islam Slimani (8) complete the comprehensive list of those ahead of own goals (5) in the scoring stakes. In terms of assists, only Mahrez and Marc Albrighton (13) have registered more than six for Leicester in the Premier League since the start of 2016/17. With Mahrez gone, Vardy will need considerably greater help going forward. Muzzy Izzet, with his league-high 14 assists in 2003/04 and his career-best eight goals in 1999/2000, would be a welcome addition.