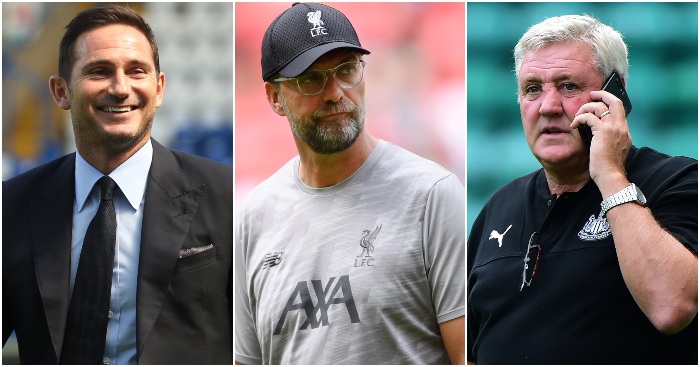 10) It will be the year of VAR conspiracy
Eurgh. Although there is vague optimism.

9) We’ll find out what Eddie Howe really is
Howe has been a purely good news story until now. When he’s winning, he gets linked to Arsenal, Chelsea, England and Tottenham, through articles which praise him for his attention to detail. When he loses and his Bournemouth side suffer through those long, barren runs, he just disappears from the news cycle and nobody seems to notice.

His great weakness has been his side’s back four and goalkeeper and that’s rightly been considered an asterisk against any perceived failings. Nathan Ake aside, his defenders were mainly hold-overs from the promotion season and, with the greatest will in the world, until now their limitations have had to be compensated for with improvements at the other end of the pitch.

And those limitations are very real: only Huddersfield and Fulham had a worse defensive record than Bournemouth in the Premier League last season. Conceding 70 goals is not a blemish, it’s symptom of outright dysfunction.

But the club have invested and, in doing so, perhaps provided Howe with a fairer basis upon which to be judged. Lloyd Kelly has been signed from Bristol City, he’s excellent, and Jack Stacey has joined from Luton. Two new full-backs. In the centre, Chris Mepham arrived from Brentford in January and, in front of the defence, Philip Billing has been bought to add a protective layer in midfield.

Together, those players comprise an opportunity for Howe to build his own defensive structure and the results will be instructive. All of those arrivals are young and susceptible to improvement through coaching, so their success as a unit will be determined by his abilities.

8) Jack Grealish to be capped by England
He’s not going to be as influential as he was in the Championship, because clearly this is a different level. His effect might also be inhibited by his side, because Villa have a lot of new parts and some which, in a top-flight context, are inexperienced, completely unknown or – frankly – a bit ordinary.

But perhaps that can be good for Grealish? Maybe operating in that kind of side, with a slightly longer list of responsibilities, will help cultivate a more rounded player. And with that hopefully will come an international future.

It should, because England don’t have that kind of player – that mixture of vision and skill, encased within a direct playing style.

Villa should survive this season. Behind that success, most likely, will be a string of Grealish performances which correct certain perceptions of him and provide the necessary assurance to those who matter.

7) Lampard’s first season to be a success
It’s early days and it’s Chelsea, so caution is advisable. But – and I appreciate that we’re straying into ‘knows the club’ territory here – there isn’t quite as much transience at Stamford Bridge. Lampard has arrived of course, but he’s been joined by a battalion of former teammates, the latest of which is Claude Makelele, who will become a technical mentor at his old club.

One of the working theories last season was that Chelsea would actually benefit from their transfer ban and that a summer away from the market would encourage them to do a proper stock-take. That seems to have happened: Callum Hudson-Odoi has finally signed his new contract, while Mason Mount looks certain to have a proper first-team role this season.

With Lampard’s arrival has come a slight tempering of ambition, too. Nobody is expecting Chelsea to challenge this season and that’s unusual. It’s good, though, because it means that, for once, everything needn’t be done in a hurry and with short-term imperatives in mind. There are also fewer questions. Some of that is the ban, but part of is that Lampard just isn’t a fully-formed coach and he hasn’t been appointed to install anything specific.

It’s advantageous, creating a situation in which they and he can grow together, to the point where he can adapt his formative attributes to their resources. To Mount, to Pulisic, to Hudson-Odoi; it’s a novel prospect and certainly a quieter kind of project.

And what is success? Fourth, fifth? The position doesn’t really matter for now, it’s all about how everything feels. And, after all the acrimony of last year, this should be a welcome change.

6) Manchester City’s UEFA situation will become more fractious
When The Athletic’s new Liverpool correspondent went to Boston to interview Tom Werner, the club chairman could have directed the conversation around the European Cup win and fine work of Jurgen Klopp without ever mentioning Financial Fair Play.

He didn’t and because people like Werner say nothing without considering the effect first, his remarks about the importance of FFP breaches being punished can be considered a tap on UEFA’s shoulder.

He’s been very careful to praise City and to credit them for playing excellent football and winning the Premier League, but there was certainly a subtext. We don’t know if City are guilty of any deception, but there’s certainly an appetite from within the Premier League – and presumably not just in Liverpool – to find out for sure and then to act decisively if so.

It’s the kind of situation which typically exists in the background but that doesn’t make it any less nasty, and the longer that UEFA leave this before clearing City or punishing them, the more acrimonious it will become.

5) Newcastle will go down
A small part of this is instructed by wanting to see bad things happen to Mike Ashley. A much larger, more serious point is that Newcastle survived last season because of their defensive record, influenced by Rafa Benitez, and are now under the control of a Championship-standard coach.

It could have been worse – Dave Bassett, Mike Walker, Kinnear (again) – but Steve Bruce’s only qualification for this job seems to be his accent and that doesn’t provide much reassurance. Newcastle have been relatively active in the market and that’s certainly encouraging, but neither Joelinton nor Allan Saint-Maximin can be treated as anything but theory until their value is proven real.

And why are they there? They’re both highly-regarded players who presumably had more than one option this summer. Two questions, then: why were other clubs not as keen? And what is their motivation for joining the club at this point in its history? Not the club in the sense of the stadium and the fans, but the club – the organisation, the business entity, the black hole where aspiration goes to die.

It’s fatalistic but it’s fair. There’s no basis for having faith in anything that happens under Ashley, so we’ll be sceptical until we’re proven wrong.

4) Crystal Palace too.
Last week, we did a piece on the absence of vision at Selhurst Park, a precis of which would be that Palace have an ageing squad decreasing in value and ability all the time and their recruiting strategy shows no urgency in confronting that problem.

This week, they signed Gary Cahill.

But not so fast. They won’t find Premier League life easy, but they’re a much better footballing side than Cardiff were and the range of weapons they possess is far broader.

Specifically? A really interesting three centre-back system, which creates overloads in the channels and helps the team advance up the field. Some very clever set-piece design which will inevitably create goalscoring opportunities. And a pair of adventurous wing-backs who cause all sorts of disruption when they cross the halfway line.

So this isn’t a battering ram team which will charge breathlessly into opponents for five months and then collapse, exhausted when it matters. They’re a well put-together unit that can pick their way through teams, score goals in a variety of ways and, importantly, came up with the best defensive record in the Championship.

Throw Ravel Morrison into that mix and they’re actually a fascinating and competitive prospect.

2) Wolves will finish in the top six
A week ago, it was Leicester. Now, with Harry Maguire gone and a little bit of uncertainty in their defence, perhaps they’re set for a more modest improvement. And Jamie Vardy will turn 33 in January; what will he be once his pace starts to ebb away?

But Wolves look in a wonderful shape. Their first objective was to keep their top performers from last season, and they’ve done that. Interest in Ruben Neves never got beyond gossip and he’ll take his place in that impressive midfield-three, alongside Leander Dendoncker and Joao Moutinho.

Elsewhere on the pitch, Nuno Espirito Santo has acquired some exciting new pieces. Jesus Vallejo looked an extremely accomplished centre-half during the European u21 Championship. He joins on loan. Patrick Cutrone has moved to Molineux permanently, having been displaced at AC Milan by the form of Krzysztof Piatek.

If there was a criticism of Wolves last season it was their lack of variation. They were a flexible and smart side, but they were very much a first XI, meaning that if one or two of their combinations weren’t working properly on any given day, the tone of performance generally dropped. Now, there are variations beyond Adama Traore and, in Cutrone, a potential rival and partner for Raul Jimenez.

So: do they play with two upfront? Is it one or the other with Diogo Jota tucked behind? Can young Portuguese winger Pedro Neto provide some alternative width? That these questions now exist is in itself a sign of improving health and, most likely, it’s that dexterity – combined with Espirito Santo’s tactical command – which will allow Wolves to tread new ground.

1) Liverpool will fall back
Let’s clarify: they’ll fall back from Manchester City, but still finish in a comfortable second place.

It’s difficult, though. The European Cup is the pinnacle of the club game and these Liverpool players have now reached that height. So what happens next – do they run as far? Will they be as accepting of what he demands from them? Maybe, but maybe not. Success changes players, it encourages the sort of ego which isn’t necessarily problematic, yet can sometimes diminish hunger and obedience.

Earlier in the summer I wrote that Liverpool shouldn’t be too active in the transfer market and that, instead, they should focus on filling minor squad gaps and harnessing the benefits of continuity. A few months later, that seems misguided: maybe some players could do with competition for their places and perhaps that would have been the way to head off the sort of issues which a major trophy can bring.

These are problems which Jurgen Klopp experienced at Dortmund, of course, after the Bundesliga and Pokal double in 2012. The situations are different, but the fear is the same for now. How will the squad dynamic be effected? What impact will Madrid have on Klopp’s relationship with players who are no longer quite as reliant on his patronage, and are now stars of the game in their own right?