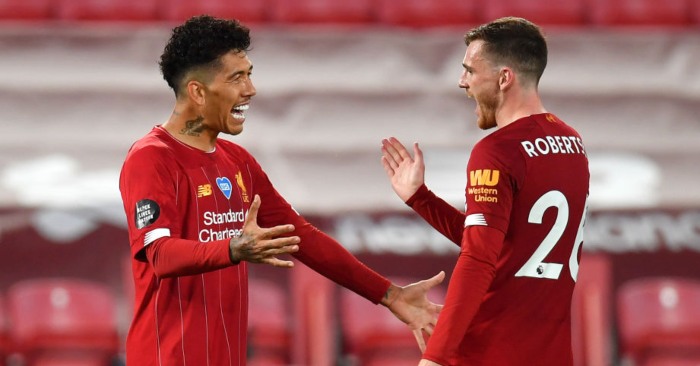 Pep Guardiola has reiterated that players are not machines as his squad battles to overcome an ever-increasing injury list. Jurgen Klopp is probably feeling the same given his iron giant is now most likely out for the season. In VVD’s absence, here are some humans that do have an ever ready battery on them…

His goals-to-shots ratio may make us wince, but Bobby Firmino still has enough chips on the table from the pay-outs of his ultimate pressing machine jackpot days. Jurgen Klopp called him “the connector for our team. He is so important for us”. The goal returns have dropped from 15 league goals in 2017/18 to 12 in 2018/19 down to nine in 2019/20. However, Firmino deserves an extended dip because his tackling stats, recoveries and interceptions are like the work of two-and-a-half men. He has been the generator for the electrical storm of Mane and Salah. The short circuit was inevitable.

It was Martin Keown who made a bizarre reference to a domestic appliance after Leeds dismantled Aston Villa’s attempt to go top of the table last Friday. Keown said: “It’s almost like being in a washing machine, there are players everywhere and they keep changing the numbers.” Shockingly, Marcelo Bielsa’s road warriors ran 9.2 kilometres more than Dean Smith’s team and recorded 73 more sprints. That included a breakneck attempt by six players to get a fourth goal deep into injury-time. Exhausting but true. Leeds are like that swarm of aliens who invade A Quiet Place when they sense their victims move.

His personal life may have drawn some tawdry headlines and prematurely becalmed his international career, but Walker has still been impressive in putting the Speedy Gonzales boots on to snuff out danger since Project Restart. After cancelling out Pierre-Emerick Aubameyang at the Etihad, Ian Wright quite simply said: “Walker was everywhere.”  He was pretty good against West Ham in dealing with Michail Antonio, although not quite as fast as August 2019 against the same opposition when Joe Cole exhorted: “He’s actually broke the speed limit in residential areas, the police will be on him now.”

He was the leading distance runner in last season’s stats by a country kilometre and he can score free-kicks just as lovely as David Beckham in his pomp. You can bet your bottom dollar or last pound that he is relentless in the gym, and tops all the pre-season fitness tests. Yet JWP will always be known as the workhorse. The journeyman made good. The man whose most memorable moment in an England shirt will be to have scuffed up the penalty spot against Iceland to annoy Roy Keane. You know, he’s probably okay with that.

The wee man has an annual friendly fire battle with TAA to be the number one assist full-back. His presence in the side became assured after that manic pressing passage when Liverpool were 4-1 up in January 2018 against Manchester City.

Another angle of that press from Andy Robertson v City pic.twitter.com/jS3uyUAwfi

Since then, Jose Mourinho has lavished him with praise after the Portuguese’s last game in charge of the Red Devils ended in a chastening 3-1 defeat: “I am still tired just looking at Robertson. He makes 100-metre sprints every minute, absolutely incredible.” The only time the last King of Scotland has looked off the pace was during the 4-0 thumping at the Etihad in July post Liverpool’s title celebrations. Makes sense. He is generally first to the beers and, as GNev said at the time: “He is playing tonight as if he has had a week on the lash.”

He’s 32 but has a heat map of a 25-year-old. Bashambaeur, as the Blades fans call him, is one hell of an overlapping centre-back with a passing range to match.

By lockdown, Basham had 61 tackles and the same number of interceptions to his name, winning back possession in the opposition third on seven occasions – the best record among all the of the centre-halves in the league. He played in every game in 2019/20, and even if the Wilder steel factory is battling a slower production line this season, the manager still thinks of his charge as “a diamond of a lad”.

The Palace captain and midfielder has become something of a cult figure over the years for his work ethic. A number of songs have emerged at Selhurst Park to sum up the dedication of the skipper, none more so than the slightly disturbing ‘he comes from Serbia, he’ll f****** murder ya’. In the 2018-19 season, Milivojevic covered the equivalent of ten marathons. He is the ironman that keeps going for one more round, and as one Palace fan put it recently, he is “tthe definition of an on-pitch general…never shirks his responsibilities”. Including penalties. He didn’t sleep after he missed that injury-time spot-kick against City on New Year’s Eve in 2017. Probably got up at 4am to run through a brick wall instead.

It seems apt that Mount and Rice were caught kicking a ball about together in a London centre when lockdown rules forbade such activities back in March. Both have that restless zing that has brought them to the attention of national manager Gareth Southgate. If it is hard yards you want over visionaries, then Mason and Declan are your protection. As Frank Lampard said of his head prefect: “You need triggers, you need people who are prepared to release a lot of energy and speed high up the pitch to win the ball back.” Rice can still give a decent interview to BT Sport after running after Manchester City for the whole of the second half. “He digs in for the group,” says Southgate. Digging in is the new creativity.

During their remarkable Premier League title run in 2015/16, Kante was Leicester City’s monster muncher with an outrageous 175 tackles and 156 interceptions. When he left for Stamford Bridge the following year, there was no one better suited to Antonio Conte’s ‘eat grass’ philosophy than the motorised Frenchman. Since the arrival of Maurizio Sarri (and Jorginho) his role has changed from being in a pivot to a trio higher up the pitch and his numbers have come down. Even so, before the rather sterile goalless draw at Old Trafford, Kante led the Premier League for interceptions, making 17, at an average of 3.45 per 90 minutes. His legs may not carry him as far and wide as before, but he’s still a blade runner.