Joelinton was made to look foolish by a Newcastle striker half his price. Theo Walcott confirms his epitaph. 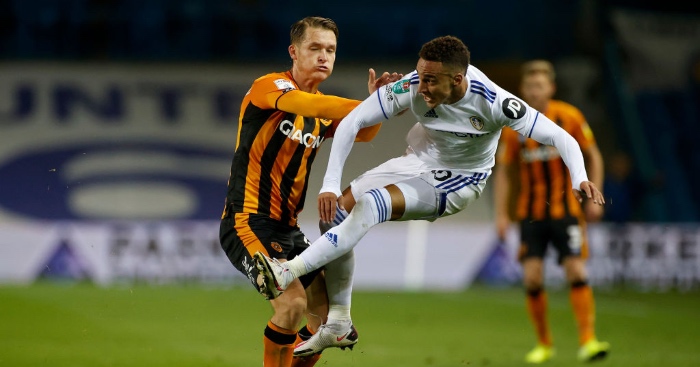 Rodrigo completes a Leeds first week to forget; Theo Walcott confirms his epitaph. Some gained favour, but these guys didn’t…

Rodrigo
On this evidence Patrick Bamford will be leading the Leeds line in the Premier League for some time to come. Tyler Roberts and Ezgjan Alioski were also pretty poor alongside him – which didn’t help – but it was another regrettable display in a week to forget for the club record signing.

Kiko Casilla
It’s rare that ill-will towards a footballer reaches such heights that we actively hope they do badly. Kiko Casilla is yet to apologise for racially abusing Jonathan Leko and he was made captain of Leeds United on Wednesday night; that is a deplorable decision.

Leeds United have made Kiko Casilla their captain tonight. Again, this man has not apologised to Jonathan Leko for racially abusing him. This is unacceptable (and thankfully most Leeds fans totally agree). Do better.

So when his pass towards Barry Douglas was easily intercepted for Hull’s opener, it felt like the tiniest bit of comeuppance; hopefully there is much more to come. Never will a “you’re sh*t, ahhhh” chant be so well-deserved on the return of crowds at football matches.

Kamil Grosicki
Quick but no cigar. It’s difficult to be a winger on the fringes: you’ve got to make an impact and that impact will inevitably be judged on goals or assists. This can lead to you forcing the play and being labelled as selfish or impatient as a result.

Still a starter for the Poland national side, Grosicki’s talent is without question, but performances like this one against Harrogate – fraught with promise but ultimately, disappointment – sum up his West Brom career to date. With Grady Diangana and Matheus Pereira the obvious frontrunners to start in the Premier League, and a local Dudley lad doing all he can to push them, Grosicki may stay limited to cup cameos.

Charlie Austin
There was a run of games last season in which Charlie Austin scored six in five. Five of those goals came off the bench, with the last two scored in 20 minutes, turning a loss into an away win at local rivals Birmingham City. He was on the bench for the next game.

Unlike then, when Austin could feel rightly aggrieved to be missing out on a starting spot, this display will have done nothing to tempt Slaven Bilic to promote his super-sub. He missed a very good chance to get on the score-sheet, but his tame effort was hit straight at a defender on the line.

On signing for West Brom, Austin simply said: “I just love scoring goals.” The problem is that’s all he does, and not all the time.

Theo Walcott
The Liverpool Echo said Walcott ‘burst down the flank on multiple occasions but was just a little too wasteful’. That’s the epitaph confirmed.

Joelinton
We used to have a problem on F365 whereby a story would often struggle to get going because it did not land on aggregator websites like NewsNow until another piece on the same club was published, at which point it sort of pushed the original through. Both stories would then garner better levels of traffic but not until and unless the first had a second to usurp it.

Steve Bruce clearly hoped the same would happen with £40m clickbait Joelinton when he plagiarised Callum Wilson for half as much from Bournemouth. Yet, judging by Newcastle’s narrow victory over Blackburn, the arrival of a new striker will only underline just how disastrous the old one was.

Joelinton was clunky, awkward and every bit as out of position and place as he looked last season, and this against a Championship defence. Not scoring is fine but the caveat has to be a good all-round performance. That was not that. It is never a good sign when a fan site can only really put across its frustration with incredulous exclamation marks.

What to do with a problem like Joelinton? #nufc boss Steve Bruce has thrown a protective arm around him since he took over.

But last night illustrated that he just can't do the sort of things Callum Wilson can. Incomprehensible he was signed as a £40m striker.

Sean Longstaff
As regrettable as any waste of money is, the squandering of any homegrown potential carries a different and arguably more damning air of failure. What makes the stagnation of Sean Longstaff worse is that no-one is really to blame.

The 22-year-old broke through under Rafael Benitez in early 2019 but started just 14 Premier League games last season under Steve Bruce due to injury, suspension and the inevitable dips in form that followed. It is simultaneously not long ago but also a lifetime since Manchester United were circling.

Longstaff is now feeding off scraps: two minutes against West Ham and a second-round cup appearance that seemed to pass him by without event. He was not terrible, but if this was his opportunity to stake a midfield claim ahead of Jonjo Shelvey and Isaac Hayden, a far from compelling case was made.

Jeff Schlupp
There is sympathy for Jeff Schlupp, who ‘didn’t really thrive in the advanced role’ despite often making Roberto Carlos look like a reserved left-back. Some reports had him down as playing as a striker and others more as a No. 10 against Bournemouth but Roy Hodgson will hope neither is anything resembling a long-term option.

There was one decent ball into the feet of similarly but forgivably disappointing new signing Michy Batshuayi, which alone equalled Schlupp’s tally of successful passes against Southampton at the weekend. But there should be no place for the 27-year-old in Palace’s improved forward line.

Anwar El Ghazi
The most cherished 25-year-old at Villa Park toiled while some Jake Grealand fella – there was some news about him signing a new contract or something – impressed at Burton. Anwar El Ghazi will have better nights; many supporters might hope they come away from the Midlands.

He was, by most accounts, a bit rubbish. The impending challenge and competition for places provided by Bertrand Traore somehow engendered an even more anonymous performance than usual from a player that might have to adjust his diet to accommodate feeding off scraps. If the Villa hierarchy really does have “ambition” for the future, El Ghazi will play no part in it.

Aaron Cresswell
As harsh as it is to suggest someone who didn’t play had his stock lowered, David Moyes might have been intrigued to see Arthur Masuaku thrive versus Charlton where Aaron Cresswell failed against Newcastle. The gulf in quality from League One to Premier League opposition must be taken into account but so too should how the respective left-backs acclimatised to the task at hand.

Masuaku was excellent in attack, forming a potent partnership with Felipe Anderson and admittedly benefiting from a distant lack of actual defending to do. That is his obvious weakness but going by Saturday, the same stands for Cresswell, who has never offered nearly as much going forward.

It is clear to see how much more confidence Anderson plays with when Masuaku is behind him.

It should have at least planted that seed of doubt in Moyes’ mind as he decides between perhaps the two most underwhelming options for a starting place in the entire Premier League. Get Patrice Evra back in.

Matt Stead and Will Ford