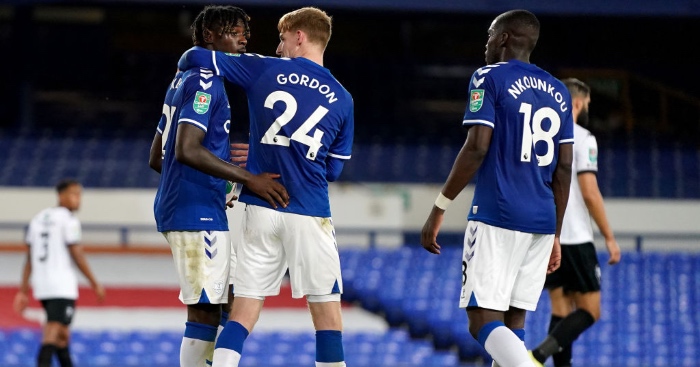 A Bielsa project stands out and there are a couple of ‘timely reminders’. Not everyone made a cock of things…

Kyle Edwards
The Birmingham Mail described Kyle Edwards’ performance in West Brom’s 3-0 win as a ‘timely reminder of his abilities’. Harrogate Town defender Warren Burrell won’t need reminding; he’ll be reliving the moment Edwards diddled him by the corner flag before easing into the penalty area to set up Callum Robinson. Fellow local lad Rekeem Harper scored a beauty, as did Hal Robson-Kanu, but on a night of great goals but little else for the Baggies, Edwards was that ‘else’.

Anthony Gordon
All Evertonians, but one, will have been thrilled by James Rodriguez’s performance against Spurs on Sunday. Anthony Gordon, having broken into the first team under Carlo Ancelotti last season, must have been a bit f***ed off. It’s one thing to bring in a formerly world-class player to the club that plays in your position, but for that player to then actually look like he’s still world class – that’s a real kick in the teeth.

But the 19-year-old was a bundle of energy once again in Everton’s 3-0 win over Salford, and was unlucky not to break his Everton duck, smacking the post with one effort while another was headed over. It was a classic timely reminder.

Ancelotti once claimed Chelsea’s Josh McEachran would one day be England captain, but – unlike with the now Birmingham bench-warmer – his enthusiasm over Gordon’s future is being backed up by hard evidence.

Niels Nkounkou
When 19-year-old Nkounkou joined Everton from Marseille this summer, the club looked set to stick him in the U23s for the time being. But the retirement of Leighton Baines means the Frenchman is now very much part of the first-team plans, though he has a tough task to displace compatriot Lucas Digne to earn a starting spot.

Nkounkou looks quicker than Digne and more willing to take on his man, certainly if this debut was anything to go by. In losing a legend, Everton have uncovered another wonderful left-back in a right-back dominated world.

Ian Poveda
“Again, Poveda!”, “Move, Poveda!”, “Now, Poveda!”, Marcelo Bielsa barked at the acquisition from Manchester City on his full debut for Leeds against Derby at the end of last season. He had waited six months for the chance and was getting an earful for his trouble. But there are worse things to be than a Bielsa project. Moulding potential is what the Argentine does, and he doesn’t do so for the hell of it.

Poveda has that potential and the desire to grow. He was the bright spark on Wednesday evening, in what was otherwise a mundane display from Leeds as they lost on penalties to Hull City. He was direct, skilful and confident. His distribution still leaves something to be desired, but that’s nothing a couple more “Now Povedas” can’t fix.

Kenny Tete
32-year-old Denis Odoi has just signed a contract extension that will keep him at Fulham until 2022. A lovely guy and great professional, but he’s not cut out for the Premier League. He showed that last time he was relegated and again against Arsenal on Saturday.

Tough one this. Great guy but as a defender, particularly at Premier League level, just not up to it. Don’t get it. https://t.co/kPfNKiycE6

Fortunately, Fulham do have a very good right-back, who should imminently replace Odoi in the first team for Premier League clashes. Kenny Tete was playing Bayern Munich in the Champions League semi-final for Lyon under a month ago, and on Wednesday was whipping a wonderful cross straight on to Aleksandar Mitrovic’s noggin.

If Fulham are to stay up this season, that is the way they are going to do it. Tete on one flank, Antonee Robinson on the other, both feeding Mitrovic, who will gobble up more chances than most.

Manuel Lanzini
A quiet first half followed by a lively, dynamic second with one GIF-worthy moment is about as much as a flair but fringe Premier League player could ask from a cup tie against lower-league opposition. It keeps you fresh in the mind of the manager and fans, as opposed to starting well but fading. And Manuel Lanzini was never going to dominate Charlton for 90 minutes, but his assist for the third goal will add to the clamour for him to feature more regularly for West Ham.

The 27-year-old started 14 Premier League games last season – only six in 2020 – with neither Manuel Pellegrini nor David Moyes fully trusting him for a variety of reasons. But Lanzini’s attitude at the very least seems positive and determined, while his quality has never really been in question. West Ham might as well give him a chance; it’s not as if he is going to be any worse than what he replaces.

Josh Cullen
And then there is Josh Cullen, who settled into a central-midfield role with ease and should surely be used more until he is sold to a direct Premier League rival to raise funds to sign James Tarkowski for £70m. The London Evening Standard reported in January that Moyes was already ‘impressed’ with a player who turned 24 in April and thus should not really be farmed out on loan any longer, so this was a fine start.

It was his pass that precipitated Sebastien Haller’s first goal, his range of passing that exerted control and his interceptions that helped keep a morale-boosting clean sheet. A first Premier League appearance for West Ham since April 2018 beckons.

Snodgrass, Lanzini and Cullen all better options as the third midfielder in our XI over Noble tbh

“He did quite well. He has waited a long time. And he’s another one who hasn’t really played any first-team football; I’m not certain he has ever appeared in a competitive match during my time. So another bonus.”

That is about as effusive as Roy Hodgson gets when discussing a player 53 years his junior. U17 World Cup winner Nya Kirby had indeed never appeared in a competitive match during his or any manager’s Crystal Palace time, with 70 solid minutes enough to get his foot on the door and his arse on the bench. Ryan Inniss, Jaroslaw Jach and Sam Woods were also great in a fine defensive display, so can share the honour of watching Jeff Schlupp play every conceivable position.

Jacob Ramsey
Played well enough to be adorned with words such as ‘mature’, ‘intelligently’, ‘dangerous’, ‘exciting’, ‘prospect’ and ‘moved’. The general opinion of the 19-year-old is that he was confident but by no means arrogant against a decent standard of opposition in Burton, showcasing both his range and speed of passing. A short loan at Doncaster earlier this year has done him the world of good.

Ramsey will not establish himself in the first team this season, nor will anyone in their right mind expect him to. But Dean Smith could be persuaded to keep him around the squad instead of fielding further loan offers from the Championship.

Ciaran Clark
Mark Gillespie was excellent in net but you wouldn’t ignore Nicholas Cage praising an unsung actor so one equally should not take Steve Bruce’s expert advice on centre-halves for granted. If he thinks Ciaran Clark was “immaculate” against Blackburn then Ciaran Clark was bloody well immaculate against Blackburn. The 30-year-old last played in February and has started 23 Premier League games since March 2018 due to injury but Jamaal Lascelles and Federico Fernandez had better watch their backs.

Matt Stead and Will Ford