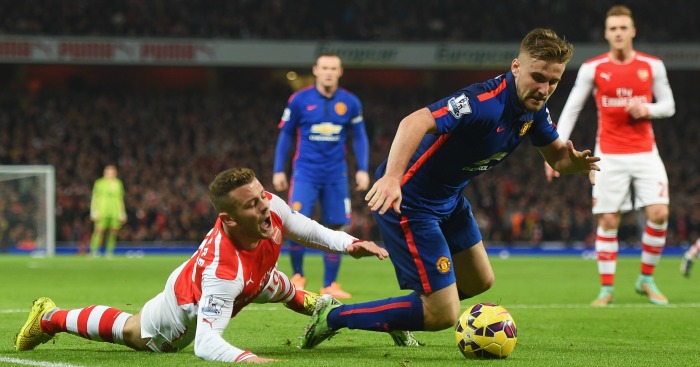 10) Kevin Mirallas (Everton)
“I’d like to sign a new contract with Everton to stay. My wife is pregnant and family are happy. I want to stay longer,” was the refrain of Kevin Mirallas before his wife gave birth to Julia last weekend. So the Belgian wants to stay, but do Everton want to keep him? Even after Ronald Koeman bullied him into scaling back his pasta consumption, there are still doubts about his work rate in the Dutchman’s younger, fitter XI.

There’s no doubt that the horrific injury to Yannick Bolasie has gifted Mirallas more chances than Koeman may have been inclined to give him; he certainly took one of those chances against West Brom with probably his finest performance of the season. How many more will he get before judgement day at the end of the season?

9) Andy Carroll (West Ham)
Slaven Bilic denied that West Ham had agreed a deal to sell Andy Carroll to China but he did admit that CSL clubs had “fallen in love” with the massive heading machine. Carroll has two months to convince his manager and chairman that he can stay fit and stay dangerous, and that probably means reaching double figures for Premier League goals for the first time since 2010/11.

“Andy I don’t think has played enough,” said Gareth Southgate this week as he omitted Carroll from his England squad and it’s that kind of perception that does him no favours. Actually, he has completed three consecutive 90 minutes in the Premier League and that’s as rare as hen’s teeth. Put a few more together and the Hammers might stop looking at Jermain Defoe, Daniel Sturridge and every other striker west of Baku.

8) Mamadou Sakho (Crystal Palace/Liverpool)
“It would be a big negotiation at the end of the season if we were to stay in the Premier League,” said Sam Allardyce when asked about the possibility of Crystal Palace signing Mamadou Sakho on a permanent deal. In truth, Sakho is far better than Palace, who are benefiting from his desperation to prove that he is still an actual, functioning footballer.

That’s what Sakho must continue to prove in the next two months – not to Allardyce, who can only hope that he is somehow Lyle Lovett to Sakho’s Julia Roberts, and probably not to the stubborn Jurgen Klopp, but to managers and chairman in the upper reaches of Europe’s biggest leagues. As an exercise in ‘remember me’, it’s going well so far.

7) Nicolas Otamendi (Manchester City)
Nobody has started more Premier League games for Manchester City at centre-half this season and yet, it is Otamendi whose long-term future is undoubtedly in danger. John Stones is a) young and b) Pep Guardiola’s man, while his Argentine partner is a stopgap solution; being dropped for occasional defender Aleksandar Kolarov must really sting.

But of course Otamendi thinks he is heading to Barcelona, or to Real Madrid to replace Pepe, so everyone’s a winner when Manchester City go out and buy three new defenders this summer.

6) Vincent Janssen (Tottenham)
‘Tottenham will cut their losses and sell Vincent Janssen this summer,’ said Saturday’s report in the Daily Mirror. Poor bugger. But surely he has a chance to change minds before he gets sold back to Holland, scores a bucketload of goals and then comes back to Everton in two years’ time?

But what can he do with two or three minutes at the end of every game? When your club’s only other out-and-out striker is injured and you still don’t get brought on until after Harry Winks and Kieran Tripper, perhaps the writing is on the wall. Ga naar huis, Vincent.

5) Lucas Perez (Arsenal)
From a barely-used £18.5m striker in north London to an under-used £17m striker in north London. Always something of a booby prize after Jamie Vardy got the fear and Alexandre Lacazette proved too expensive, Perez has been made to look like a tit by Arsene Wenger, who has given him fewer Premier League minutes than Rob Holding.

Can Wenger find some love in his heart for Perez? Can Perez add to his one Premier League goal the next time he gets seven minutes? Will that encourage West Ham or Everton to make a bid? We would quite like him to stay as he has a lovely face.

Being stuck on the bench and watching Bournemouth turn around their form does not reflect well on England’s most naturally gifted central midfielder. And it probably cost him an England place that was instead handed to Jake bloody Livermore.

3) Cesc Fabregas (Chelsea)
Who on earth would have predicted that Cesc Fabregas would be the perfect squad player? Six months ago, a summer exit seemed inevitable and would presumably have brought sweet relief, but now…Fabregas says he is “100 per cent” sure he will be at Chelsea next season. “I am not thinking about anything else than challenging myself here,” says the Spaniard, who relished the chance to learn under Antonio Conte even when he was at the back of the class.

But however sure Fabregas sounds, his future still depends on two things: His reliability in the run-in (at a time when his form has often dipped), and Conte’s summer business. If his form can persuade Conte to buy one rather than two central midfielders this summer, his job is done. Otherwise, the slower pace of Italy beckons.

2) Luke Shaw (Manchester United)
‘Shaw has not yet been completely written off, and could yet turn his situation around, but those close to the squad say he has a lot of convincing to do,’ said a report in the Independent in January. Since that report, Luke Shaw has played twice – against Wigan and Bournemouth. Time is running out and Shaw is being pushed towards an exit door that might come as sweet relief.

“He has got a challenge now to get himself into the team at Manchester United,” said Gareth Southgate this week, who picked him despite his sidelining by Jose Mourinho. It looks like a challenge too far for Shaw, who could yet prove his manager all shades of wrong at Tottenham if Danny Rose leaves for Manchester City,

1) Daniel Sturridge (Liverpool)
Despite all the jokes – and there are many – Daniel Sturridge has actually been available for 20 of 29 Premier League games this season. There have been injury problems (of course) but they only tell half the story of a season when Sturridge has slipped so far out of favour at Liverpool that he is probably in a WhatsApp group with Marko Grujic and Kevin Stewart.

I think Ian Rush has now played more minutes in a Liverpool shirt in 2017 than Daniel Sturridge has.

And yet the suspicion persists that he is Liverpool’s best finisher; two fit months and five goals to claim a top-four place would either save his Liverpool career or earn him a move somewhere sexier than West Ham. After all, it’s little more than three months since he was starting and scoring for England.