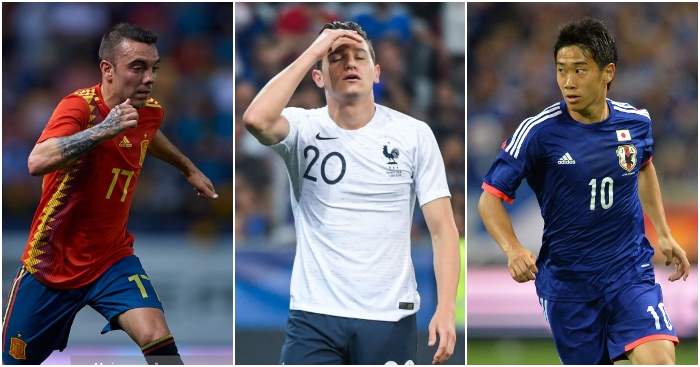 Ahmed Fathy (Sheffield United and Egypt)
The transfer window is to Neil Warnock what oxygen is to other living organisms. With Sheffield United an almost unfathomable 16th in the Premier League on New Year’s Day 2007, the manager sought to assure their survival and treat himself by embarking on something of a shopping spree. Matthew Kilgallon, Jon Stead, Mamadou Seck, Luton Shelton and Ahmed Fathy all joined within 11 days of each other for around £6million. It did not work.

The paths undertaken by that quintet since United’s eventual demise have varied. Kilgallon ended last season as Bradford’s Player of the Year, while Stead has formed the most lethal strike partnership in the Nottinghamshire area alongside Shola Ameobi. Seck has long since retired, and Shelton is turning out for Harbour View F.C in Jamaica’s wonderfully named Red Stripe Premier League.

Fathy will shed a single tear for each of his former teammates as he prepares to head to Russia. The 33-year-old is Egypt’s regular right-back, even filling in on occasion as captain when 45-year-old goalkeeper Essam El-Hadary wants to put his feet up and complete a few crossword puzzles. As only the third Egyptian to ever feature in the Premier League, Fathy will meet this latest challenge head on.

Yuri Zhirkov (Chelsea and Russia)
Chelsea likely thought they had engineered something of a coup when signing Yuri Zhirkov for £18m in summer 2009. The 25-year-old joined seven months after receiving a Ballon d’Or nomination, and 12 after being named in UEFA’s Euro 2008 Team of the Tournament. Russia reached the semi-finals thanks in no small part to the performances of the left-winger.

Zhirkov had already won 11 club trophies in Russia before moving to the Premier League, including a goalscoring turn in the 2005 UEFA Cup final. But he would struggle at Stamford Bridge, playing just 29 Premier League games across two seasons. “Psychologically I feel much better in Russia because at Chelsea I had problems,” he said after leaving in 2011. “For example, I would play 10 matches in a row, then Lampard would return from an injury and right away I would find myself sitting on the bench.”

The Derby manager is unlikely to be an obstacle this time.

Iago Aspas (Liverpool and Spain)
That corner. That bloody corner. Iago Aspas came to England, scored one goal in 15 games, and the only enduring memory of his solitary Premier League season is that corner. “It was a great season for Liverpool – one of their best – although I would have liked to have played a bigger part and that corner is the final memory, so it’s their lasting image of me,” he said ahead of the Europa League semi-final last May.

Aspas would never play for Liverpool again after that Chelsea defeat – not that things improved immediately thereafter. He joined Sevilla on loan and, despite failing to have much of an impact in Andalusia, joined permanently in June 2015. He was sold back to boyhood club Celta Vigo the same day, thus completing the circle of a bizarre career.

The 30-year-old has clearly benefited from more familiar surroundings. He has scored 55 La Liga goals in the last three seasons, with only Antoine Griezmann (57), Cristiano Ronaldo (86), Luis Suárez (94) and Lionel Messi (97) scoring more. Liverpool fans with short-term memories would be forgiven for clamouring for his signing.

Andreas Cornelius (Cardiff and Denmark)
Before managing to turn the considerable tide this season, choosing sides between Cardiff City owner Vincent Tan and former manager Malky Mackay was a thankless task – like deciding which of your children was your favourite, but only if both of your children were just terrible, terrible people.

And then Tan saw the light. “It was unfortunate that we only stayed in the Premier League for one season,” he said last August, bemoaning the fact that “we spent a lot of money”. But one player was the particular subject of his ire: “What did we get? We paid £10.5m for Cornelius who didn’t even play 45 minutes and then the manager said he was a project. I’m in the Premier League, I need to survive. What an idiot he [Mackay] is.”

What an idiot indeed. Cornelius was handed 107 Premier League minutes as Cardiff plummeted straight back to the Championship in 2013/14. He tends to fare slightly better for Denmark, as a record of eight goals in 19 appearances attests.

Florian Thauvin (Newcastle and France)
Graham Carr, like Alan Pardew, still has two years left on his contract at Newcastle. The former scout agreed an eight-year extension in June 2012, three months before Pardew celebrated the same terms with a wink and a cool glass of the finest fresh pineapple juice. After all, “when you’re the King, you can do anything”.

Carr and Pardew enjoyed some remarkable success at Newcastle. The pair linked up when the latter was appointed as Chris Hughton’s replacement in December 2010, and the juiciest fruits of their labour came in 2011/12 with a fifth-placed finish. Carr’s scouting network and Pardew’s particular brand of management combined to create a powerful recipe for prosperity.

It would not last. Carr outstayed Pardew but his magic touch in the transfer market betrayed him, delivering more Emmanuel Rivières and Rémy Cabellas than Yohan Cabayes as time went on. Carr left in the summer of 2017, his most costly mistake being that of Florian Thauvin. The Frenchman remains the club’s fifth biggest signing ever at £12m; he started three Premier League games before leaving permanently.

While Newcastle will spend the summer needing to finally make a club-record signing, Thauvin will be waiting patiently to take any opportunities that present themselves for France. Having scored 26 goals and assisted a further 18 for Marseille this season, you’d back him.

Andrej Kramaric (Leicester and Croatia)
Let it never be said that Andrej Kramaric is averse to riding on anyone’s coattails. The striker said that he was “glad to be part of” Leicester’s Premier League title success in 2015/16, having played just 22 minutes of their historic campaign. His contribution was as welcome as that of Jamie Vardy, N’Golo Kante and Riyad Mahrez, most certainly.

It was not quite enough to earn a winner’s medal. Within a year of his arrival Kramaric was loaned out to the Bundesliga, and five months later he had departed permanently. But the striker will harbour hopes of a more prominent role in the Croatia set-up. He has played the full 90 minutes of their two most recent friendlies, and a midfield of Luka Modric, Ivan Rakitic and Mateo Kovacic has a chance of making pretty much anyone in front of them look good.

Cristian Gamboa (West Brom and Costa Rica)
The story of Cristian Gamboa has been oft-told on these hallowed pages. The Costa Rican joined West Brom for £2m in July 2014, starting just one Premier League game under Alan Irvine before the Scotsman’s sacking that December. The arrival of Tony Pulis as his replacement did not herald a brighter dawn: he did not play a single league game for the rest of the season, and only made five of 18 benches.

Gamboa finally fought his way into Pulis’s plans the following season, coming on as a second-half substitute in a game in August. That remains his last Premier League appearance: he joined Celtic in summer 2016. As for the mystery as to why Pulis constantly overlooked him, perhaps Wikipedia can shed a light on the situation?

‘Cristian Esteban Gamboa Luna (born 24 October 1989), commonly known as Cristian Gamboa, is a Costa Rican footballer who plays for Celtic. He is a pacy right back with both attacking and defensive capabilities.’

It’s enough to make you vomit into a baseball cap.

Jerome Boateng (Manchester City and Germany)
“In England, you have to operate immediately,” said Jerome Boateng in October 2016, and it is difficult not to sympathise. The centre-half arrived from Hamburg for £10m in summer 2010, tasked with breaking up the central defensive partnership of Vincent Kompany and Joleon Lescott. If injury problems were not enough of a disruption, Roberto Mancini was insistent on using the German as a full-back. It was never going to work out.

As with Gerard Pique, who thrived at Barcelona after struggling at Manchester United, Boateng simply needed more home comforts. He developed into one of the finest centre-halves in the world at Bayern Munich, quickly banishing memories of his Manchester misery and bolstering his trophy collection. His spell at City is the rare black mark on an accomplished and illustrious career – as well as almost having his ankles broken by Lionel Messi that one time.

Andreas Granqvist (Wigan and Sweden)
Chris Hutchings is misunderstood. The misconception is that there are few better at putting out the cones, but that he could not excel as the man in charge. He might be responsible for two of the shortest managerial reigns in Premier League history at Bradford and Wigan, yet his record in the transfer market is surprisingly good. Benito Carbone and Antonio Valencia should dedicate their entire careers to the 60-year-old.

There were as many misses as hits, as is only natural. The summer he spent in charge of Wigan in 2007 saw Valencia and Michael Brown join, with Andreas Granqvist signed permanently. The centre-half moved to Wigan from Helsingborg on loan the previous January, but was restricted to just 80 minutes in the FA Cup defeat to Portsmouth.

All parties soon regretted the move. Hutchings was sacked in November, Granqvist won two of the 13 Premier League games he started, and Wigan had wasted money on a dud. Over a decade on, he will captain Sweden at the World Cup, after which he plans to return to Helsingborg from Krasnodar. Lovely.

Shinji Kagawa (Manchester United and Japan)
Manchester United have had two Premier League hat-tricks scored against them since they last netted one themselves. Romelu Lukaku consigned his future employers to an afternoon of frustration on the final day of the 2012/13 season, while Samuel Eto’o struck thrice in a win for Chelsea the following January.

Robin van Persie was the last United player to take a league match-day ball home, his treble against Aston Villa securing the title in April 2013. A month prior, Shinji Kagawa became the first Asian player to score a Premier League hat-trick as United sauntered to a victory over Norwich. It was the brief bright spark of a difficult two years, with his return to Dortmund helping rekindle the sort of form Japan will hope to see this summer.