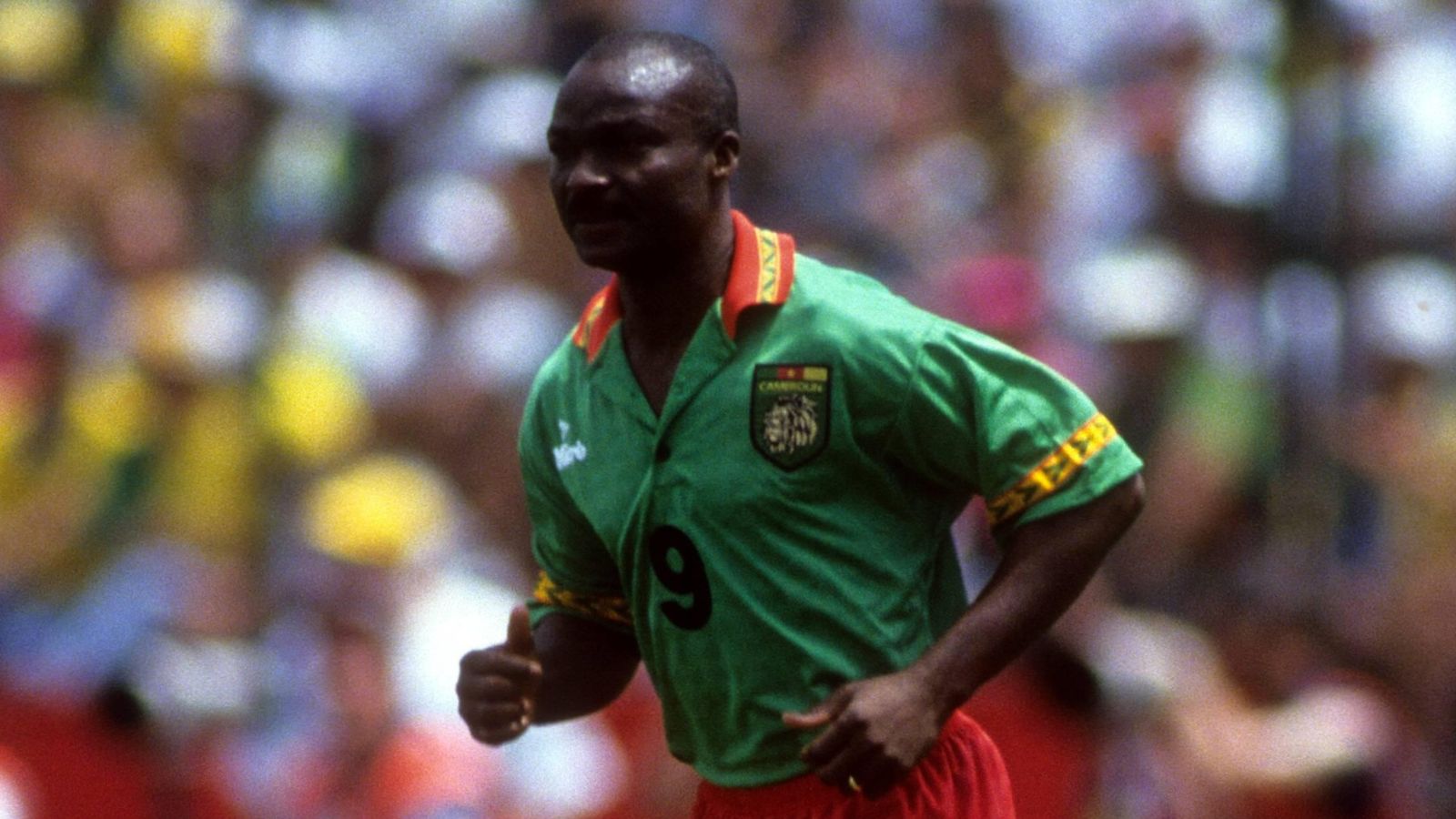 Some World Cup records have been reinforced by modern changes, while others were ludicrously unreachable from the very moment they were set.

10) Most yellow cards received in a match (3) – Josip Simunic
Let’s start with the mild, tepid banter of a World Cup record that won’t be broken due to the sheer unprecedented incompetence which allowed it to be set. During a 2-2 draw between Croatia and Australia in 2006, Josip Simunic was booked for palming Harry Kewell in the face, booked again for hauling both Mark Viduka and Joshua Kennedy down within a matter of seconds around the centre circle, and then shown his third yellow card of a very successful evening for dissent after the final whistle. Graham Poll attributed the error to his relatively simple system of recording cards being subconsciously undone by hearing the Canberra-born Croatian defender Simunic speak with an Australian accent.

With the spoilsport that is VAR, the mistake won’t be repeated again. But imagine the world-burning, server-melting hilarity if it ever did somehow happen in the modern age.

9) Most goals scored in a lost match (4) – Ernst Wilimowski
Four goals scored in a lost match, Jeremy? Four?! That’s really quite preposterous. Pretty sure that’s how the quote goes. Happy with that. Anyway, Ernst Wilimowski. Bloke bagged at least 1,077 goals in 688 matches, making him the 14th most prolific scorer in official verified history. It really is quite a lot. He saved four for his only World Cup game, the straight knockouts of 1938 when Poland met Brazil in the round of 16 and played out a quiet, cagey game. Wilimowski won an equalising penalty, converted by Friedrich Scherfke, before scoring to make it 3-2, 3-3, 4-4 and finally 6-5. Leonidas netted a hat-trick of his own for the favourites however, including two goals in extra-time, to render Wilimowski’s efforts moot. He truly was the Roque Santa Cruz of his day.

In the entire 134-year history of the English top flight, no player has ever scored four goals in defeat. There have only been eight World Cup hat-tricks since the last time someone scored more than three times in a tournament finals match, 28 years ago…

His truly was the most peculiar international career. Salenko represented the Soviet Union at youth level, played for Ukraine once in 1992 and then featured eight times for Russia between November 1993 and June 1994, scoring all six of his goals at the World Cup in the United States. After converting a penalty in defeat to Sweden, Salenko stuck five past Cameroon in a historic meeting. Emilio Butragueno (Spain, 1986), Eusebio (Portugal, 1966), Just Fontaine (France, 1958), Sandor Kocsis (Hungary, 1954), Ademir (Brazil, 1950) and the aforementioned Wilimowski are the only other players to score more than three goals in a single World Cup game. Salenko’s bizarre legacy is safe.

7) Oldest goalscorer (42 years, 39 days) – Roger Milla
It was in that game between Russia and Cameroon, perhaps the most heritage-laden in World Cup history, that Roger Milla achieved something remarkable: extending one of his own well-protected records.

Already 3-0 down at half-time, Milla was brought on in the hope of salvaging something meaningful. After barely a minute, the veteran striker capitalised on a mistake in the understandably slack Russian defence to hold off Dmitriy Khlestov, slide the ball past Stanislas Cherchesov and celebrate more effusively than Salenko had cumulatively for each of his five goals.

Milla had already entered the game as the oldest scorer in World Cup history, on account of his goals against Colombia in the round of 16 in 1990 at the age of 38 years and 34 days. No-one has even managed to beat that mark – Cristiano Ronaldo established himself as the closest contender at 37 years and 292 days with his goal against Ghana (not Uruguay) – never mind the higher bar.

6) Oldest player (45 years, 161 days) – Essam El Hadary
Milla is not quite the oldest player in World Cup history. He remains the oldest outfielder, with Atiba Hutchinson and Pepe taking distant podium places this year at 39. But a couple of goalkeepers have since made the Cameroon icon seem like a promising young prospect.

Faryd Mondragon was first to displace the legendary forward, coming on as a late substitute to don the gloves one last time for Colombia in a comfortable win over Japan in 2014.

Essam El Hadary had made his professional debut by the time Milla set the record in 1994; the Egypt goalkeeper made his debut for the national team in 1996 and would break it by 2018. For his 159th cap, he captained The Pharaohs in a dead rubber group game defeat against Saudi Arabia, even deigning to save a penalty in his mid-40s. By that August, he declared himself too old for this sh*t as he sauntered off into retirement.

5) Most World Cup final appearances (3) – Cafu
Twenty-one different players have won more than one World Cup, from Bellimi to Zozimo – two of the 16 Brazilians to do so, alongside Italy quartet Giovanni Ferrari, Guido Masetti, Giuseppe Meazza, Eraldo Monzeglio and Argentina legend Daniel Passarella.

Pele stands alone with three trophy wins, with his success in 1958 and 1970 supplemented by Brazilian glory in 1962, when the forward missed the Selecao’s last four games through injury.

He is one of the five players to feature in three World Cup-winning squads, a feat matched by Lothar Matthaus, Pierre Littbarski and Ronaldo. But only Cafu has played in three finals, coming on as a substitute and finishing the 1994 penalty shootout victory over Italy, losing to France in 1998 and lifting the famous trophy again against Germany in 2002.

It has become rare enough for whole countries to reach multiple finals in quick succession – since Brazil completed that hat-trick in 2002, only Argentina have managed more than one such appearance (2014 and 2022) – so the Brazilian Jon Flanagan might forever stand alone with this example of baffling longevity.

4) Most World Cups as captain (5) – Rafael Marquez
That exhaustive list of players to feature at five different World Cup tournaments includes Matthaus, Ronaldo and Messi, along with Mexico mainstays Antonio Carbajal and Andres Guardado. Completing the set is Rafael Marquez, who has the unique distinction of captaining El Tri in 2002, 2006, 2010, 2014 and 2018.

It is a feat which will never be repeated as Marquez led his country in South Korea and Japan at 23, all the way to Russia in the final year of his 30s. That mixture of longevity and leadership from a young age makes it impossible to fathom anything similar. Curse Manuel Lapuente, the Mexico coach who overlooked a teenaged Marquez, then at Atlas, for the 1998 World Cup, at which Alberto Garcia Aspe was captain.

Kuwait in 1982. United Arab Emirates in 1990. Brazil in 1994 and 2006. Saudi Arabia in 1998. South Africa in 2010. Bora Milutinovic can match the achievement of taking five different nations to the World Cup, but that part-timer forgot to lead one of them there twice like the fool he is.

Parreira was fitness coach for Brazil in 1970, was sacked midway through France ’98 by Saudi Arabia and inflicted what remains, by FIFA rankings, the single biggest upset in World Cup history when he guided hosts South Africa (ranked 83) to victory over France (ranked 9) in 2010. His middle name is basically but also definitely not Jules Rimet.

2) Youngest scorer in a final (17 years, 249 days) – Pele
Take your pick of Pele records, really. The youngest scorer (17 years, 239 days), youngest hat-trick scorer (17 years, 244 days) and top overall assist provider (10) is also one of four players to score three goals in finals, one of a slightly different quartet to score in more than one final, and is officially recognised as the only player to win the World Cup on three different occasions.

Pele played every minute in Brazil’s 1970 success, scoring four goals and assisting six, while he only played the first two matches of Chile ’62 due to injury. But it was four years before in Sweden when a teenaged sensation established his legacy with a goal against Wales in the quarters, a hat-trick to beat France in the semis and two goals to sink the hosts in the final. Still overrated, mind.

Three, two and one against Paraguay, Yugoslavia and Scotland respectively in the groups, became two in a quarter-final win over Northern Ireland and one in semi-final defeat to Brazil, before four were plundered in a third-place play-off against West Germany.

The next highest Golden Boot tally was by Sandor Kocsis four years before when he scored 11 for runners-up Hungary. The last four winners only scored five (Klose in 2006, Thomas Muller in 2010) or six (James Rodriguez in 2014, Harry Kane in 2018). As long as Erling Haaland is kept away, the Fontaine of knowledge will never run dry.