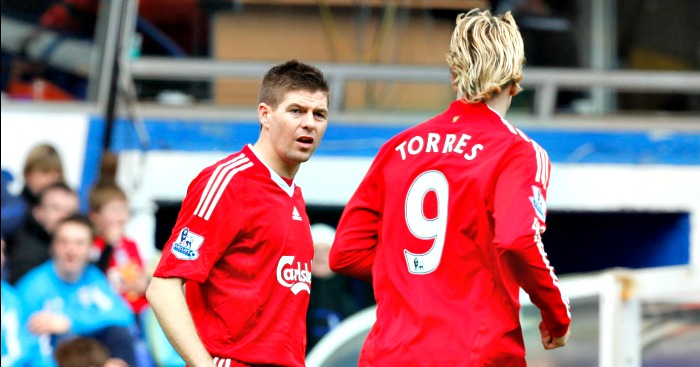 After Arsenal midfielder Mathieu Flamini conceded a decisive penalty within 47 seconds of his introduction as a substitute against Barcelona, we look at eleven of the worst substitutions in club football.

Jimmy Floyd Hasselbaink and Robert Huth
There are two Claudio Ranieris. There is the current edition, the lovable, eccentric Italian who has assembled a squad of misfits and led them to the top of the Premier League table in late February. Then there is the madcap buffoon who couldn’t resist making constant changes to his side. Or, to give him his proper nickname, ‘The Tinkerman’.

Before Ranieri’s triumphant return to England as the leader of Leicester’s remarkable title challenge, the 64-year-old fostered a reputation as a failure on these shores, one which was carefully built during his four years at Chelsea. The Italian represented the final manager of Chelsea’s forgotten years, with his replacement Jose Mourinho, and the numerous incumbents after him, delivering the trophies Roman Abramovich so craved. Ranieri’s legacy was that of a constant unnecessary tinkerer, which sounds far more menacing than first intended.

The pinnacle of ‘The Tinkerman’ was witnessed during one of his final matches at the Chelsea helm. The Blues headed to Monaco in the 2004 Champions League semi-final. With Porto and Deportivo La Coruna comprising the remainder of the final four, Chelsea were installed as the tournament favourites. Then crazy Ranieri happened. With the scores level at 1-1 and the French side having had a player sent off, Jimmy Floyd Hasselbaink was sent on to replace Mario Melchiot. Scott Parker moved to right-back, and Hasselbaink was assigned a role on the right wing. Seven minutes later, Parker was removed for Robert Huth to take over. Within 15 minutes, Monaco had overcome a numerical disadvantage to score twice, take a 3-1 lead, and eventually progress to the final. Ranieri was sacked a month later.

Ali Dia
The oft-told story of one Ali Dia has truly earned its place in footballing folklore. The cousin of former FIFA World Player of the Year George Weah. The Senegal international. The star who had impressed in Italy with Bologna and France with Paris Saint-Germain. The most memorable substitute in Premier League history.

Graeme Sounness was convinced. The then-Southampton manager handed Dia a one-month contract after a personal recommendation from ‘Weah’, or a man posing as him, and the striker, who listed Blyth Spartans and French amateur sides Beauvais and Dijon, not Paris Saint-Germain, among his previous clubs, had made history. Matt Le Tissier passed the proverbial torch to the next generation, with Souness substituting the club legend for Dia in a game against Leeds in November 1996. Two shots, no goals, a 30% passing accuracy, and 53 minutes later, the forward was himself removed. He would not play for the club again.

Eidur Gudjohnsen, Frank Lampard and Damien Duff
Manchester City, Porto, Barcelona, Bayern Munich, Liverpool, Newcastle. The latter is rather conspicuous by its presence in a list of the only clubs to beat Chelsea in the 2004/05 season.

The fifth-round FA Cup tie in February 2005 provided what was then an unheard-of quantity: a game Jose Mourinho horribly mismanaged. Patrick Kluivert had headed Newcastle into an early lead at St James’ Park, and the hosts stoutly defended their lead into half-time. Mourinho opted to use all three of his substitutes at the break, bringing on Eidur Gudjohnsen, Frank Lampard and Damien Duff for Geremi, Joe Cole and Tiago. The changes backfired; within two minutes, Wayne Bridge was stretchered off with an injury. Chelsea were made to play the remainder of the second half with just ten men, a plight made considerably worse as Duff and William Gallas were clearly struggling by full-time, and Carlo Cudicini was sent off late on.

Jan Kirchhoff
“When you come to a new environment in the middle of January and are thrown in the deep end it’s difficult. It’s me to blame more than Jan for throwing him in so quickly. I wasn’t angry with him at all. It gave Jan a massive shock. It showed him how difficult this level is.”

In his first test at the school of Sam Allardyce, Jan Kirchhoff failed miserably. The German, a signing from Bayern Munich nine days prior, was introduced as a second-half substitute against Tottenham in a Premier League game in January. Sunderland had opened the scoring, and were on course to secure a crucial point in their quest for survival. Eight minutes after taking to the field, Kirchhoff showcased his desire, lazily lifting a leg to block a Christian Eriksen shot, and inadvertently deflecting it past Jordan Pickford. A bad debut worsened further when the defender conceded a penalty for a foul on Danny Rose.

Keith Gillespie
Part-time ‘Class of 92’ alumnus, part-time actual professional footballer in his own right, Gillespie wrote his name in footballing record books back in 2007. Within 12 seconds of taking to the field as a substitute for Sheffield United in a Premier League game against Reading, the winger was dismissed for elbowing Stephen Hunt in the face. Play had not actually restarted, and Gillespie was therefore technically dismissed after zero seconds. A day later he handed in a transfer request which would be recanted in the summer.

Emmanuel Eboue
Flamini is not Arsene Wenger’s worst substitution in his two decades at Arsenal. It’s not even close. The midfielder did not suffer the ignominy of being the substituted substitute, after all.

That honour was memorably bestowed on Emmanuel Eboue during a Premier League game against Wigan in 2008. The Ivory Coast international replaced Samir Nasri after 32 minutes at the Emirates Stadium, and was subsequently booed by his own fans after a terrible performance. As if to further embarrass him, Wenger substituted Mikael Silvestre on for the right-back with only stoppage time remaining.

“Eboue played for longer than I wanted him to,” said Wenger after the game. “His concentration dropped a little bit and when the crowd got on his back that was difficult to see and accept.”

Marco Boogers
The day was Wednesday. The date was August 23. The year was 1995. A previously-unheard-of Dutchman would fulfill the dreams of Liverpool fans across the country. Marco Boogers would execute what The Sun then described as a ‘sickening horror tackle’ on Gary Neville.

Signed by West Ham for £1million in the summer, manager Harry Redknapp had never actually seen Boogers play live. In the days before YouTube highlight reels, Redknapp instead relied on a video to showcase Boogers’ immense talents. Redknapp was convinced, and the deal was done. Henry has since described Boogers as his worst-ever signing at Upton Park, of which his substitute cameo against United was the highlight. The Dutchman replaced Danny Williamson with a quarter of an hour remaining – the Hammers losing 2-1 at this stage – and within 14 minutes Boogers was dismissed for a rib-high challenge on Neville. He played two more games for West Ham before returning to the Netherlands.

David N’Gog
You are Rafael Benitez. You manage Liverpool. You are drawing 1-1 with Birmingham, and need a victory to maintain already dwindling hopes of securing Champions League qualification. Do you a) keep Fernando Torres (81 goals in 142 appearances for the club) on the pitch, or b) substitute him for David N’Gog (19 goals in 94 appearances for the club). You answer b). You proceed to draw 1-1, with N’Gog missing a glut of chances to score.

Sometimes words are simply not enough. In which case, this should suffice:

Nick Powell
“What the actual f**k?”

The above was one of five pertinent questions we asked of Louis van Gaal in the aftermath of Manchester United’s Champions League exit at the hands of German side Wolfsburg in December. Nick Powell was the subject. The midfielder came on as a second-half substitute with United needing a winner. Spoiler: He did not score one. His previous minutes for the club beforehand came in August 2014. Before that, they came in the 1-0 defeat to FC Cluj in December 2012.

Nicky Weaver
“I sat at home on Saturday night and thought to myself: ‘What shall I do if we’re drawing the game late on and need to hit it long?’ I’ve got a good striker in Jon Macken, who is really disappointed, but I wanted to unsettle them and in some ways it did. It unsettled everyone…them and us.” – Stuart Pearce, May 2005.

Ah, those halcyon days at Manchester City. Before the money, before lovely Sergio Aguero, before the imminent arrival of Pep Guardiola, there was Stuart Pearce. There was a strikeforce of Macken, Robbie Fowler and Bradley Wright-Phillips. There were Premier League finishes ranging from eighth to 16th. There was pushing David James up as a striker in the last game of the season with European qualification in the balance. Wait, what?

With the scores level at 1-1 at the Etihad, both Middlesbrough and Manchester City were chasing qualification for the UEFA Cup for the 2005/06 season. Two minutes of normal time remained, and Pearce looked to his bench for inspiration. In need of a winning goal, his last roll of the dice would either be goalkeeper Nicky Weaver, defender Stephen Jordan or striker Jon Macken. An easy choice? Yes, but not as you think. Pearce subbed Weaver on for Claudio Reyna, pushing James up front as a striker. City forced a last-minute penalty, but Fowler was thwarted by Mark Schwarzer.

Steven Gerrard
Picture the scene: Liverpool are losing 1-0 to Manchester United at half-time, Juan Mata the scorer of the only goal. In his final game for the Reds against their bitter rivals before departing for America, Steven Gerrard is introduced as a substitute at half-time. Captain fantastic to the rescue once more before riding off into the Los Angeles sunset. A match-winning cameo, a final farewell present to the fans.

Not quite. Gerrard replaced Adam Lallana at the interval, and within 38 seconds he was marching back down the tunnel, having left stud marks on Ander Herrera’s shin. A final game against Manchester United for Steven Gerrard ended in him costing his club ever so dearly. Poor thing.