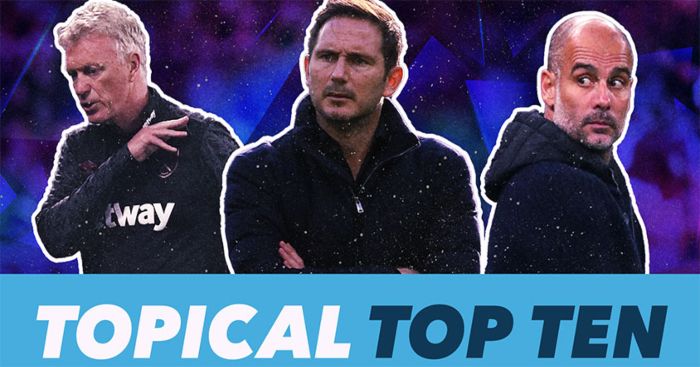 10) Mikel Arteta was a genius
It was after the lazy language trope derby that even the most ardent Arteta acolytes had to accept there was something wrong. Leeds had gone 40 consecutive league games without drawing 0-0, their matches featuring more goals than every other Premier League club so far except for Liverpool. Then Arsenal visited Elland Road, had a couple of shots on target and returned to north London with a point comprised of grit and boredom.

Dominic Calvert-Lewin has scored more goals than the Gunners this season. Their highest shot-takers are Bukayo Saka and Pierre-Emerick Aubameyang, both on 13 and ranking joint-44th in the division, level with Harry Maguire and Trent Alexander-Arnold and below Yves Bissouma, Tomas Soucek and Richarlison, who has only played six matches. The defence has been solidified, the FA Cup returned to its natural habitat and the standards that slipped so far under Unai Emery painstakingly raised. It is not even a year since Arteta was appointed in the first managerial role of his career. But the grandiose claims sparked by one statement victory have been followed by a whimper. A clearly talented coach still has a hell of a lot of work to do and questions to answer.

9) Crystal Palace were in trouble
Not even jump-starting Burnley’s season after happening upon Sean Dyche and his broken-down Clarets on the side of this busy Premier League road can take too much away from Crystal Palace’s quiet shuffle into mid-table security. Not many teams will enjoy facing Southampton, Manchester United and Leeds this season so to beat all three with little over a fifth of the campaign gone should not be overlooked.

It was by no means a unanimous belief that they would end their eighth consecutive top-flight season by slipping back down into the Championship but most tipped at least a relegation battle. Seven straight defeats and a draw to close out 2019/20, with only one player signed for a fee in the summer, hardly engendered confidence. Yet they currently sit neatly between Wolves and Manchester United directly above them and Arsenal and Manchester City immediately below. Roy Hodgson’s orbit is inevitable.

“It’s all over here at Selhurst Park between Palace and Newcastle, 0-0, no shots on target for either side and somehow, both sides have ended the game with 31% possession.” pic.twitter.com/VMAwGwr3rs

8) Sheffield United would be alright
The warning signs were ignored. Never before had a Premier League team finished in the top half with a leading scorer on as few as six goals. Their post-lockdown form was lacklustre. Their recruitment was haphazard. Their entire game was based on an intensity and emotion that is difficult to replicate without supporters in attendance. Combine that with injuries in key positions, a general lack of luck and a slight drop in overall output and performance that highlights the extent of their over-achievement last season, and the glare of hindsight suggests Sheffield United were always going to be in trouble.

That is the fine line any team walks when it wins 14 games and draws and loses 12 each across a league campaign in which they both score and concede 39 goals. Chris Wilder and his players mastered and benefited from the same incredibly tight margins that have betrayed them thus far: from eight single-goal victories last season to six single-goal defeats so far this. In many ways it might be better if they were getting thrashed each week in results that would force change and introspection, rather than losing so narrowly and sustaining themselves on the idea the tide will turn soon enough. What if it simply doesn’t?

7) Liverpool couldn’t keep it up for a third season
It will require 84 points for Liverpool to break one of those records that really is no such thing, like the most passes with the left foot into the final third in the last 17 minutes away at a team reduced to ten men. But Manchester City’s three-season points tally of 279 between 2016 and 2019 does at least offer Jurgen Klopp a marker to strive for.

That is important, particularly in this era of goalposts being moved with unerring consistency as pundits declare that this Liverpool side cannot possibly be called the greatest ever unless they win three titles in a row and a couple more Champions Leagues while solving world hunger and making sacrifices to our broadcast overlords. They may not have been able to maintain the quite ridiculous results of the past two years but Liverpool have arguably increased their performance levels during a global pandemic that has contributed to an injury outbreak affecting many of their best players. Chelsea, Arsenal and Leicester have already been swept away by the fierce current of the rampant champions. They won’t be the last.

6) Leeds would finish comfortably in the top half
There were murmurs before a ball was kicked, only strengthened by the pre-season message of chief executive Angus Kinnear that Leeds “should have a Champions League team and that’s the vision”. Defeat to Liverpool positively fanned those flames instead of dampening them as even arch-nemesis Gary Neville praised “a thing of beauty to watch” and suggested “they will scare the living daylights out of some teams”.

The clue was when Klopp was so effusive in his applause. Much like Pep Guardiola, the Liverpool manager tends only to publicly announce his appreciation for teams that are expansive but eminently beatable, reserving his ire for those that dare defy his divine right to win. Leeds will undoubtedly survive quite easily but conceding the fifth-most shots in the division while having the second-most establishes as much of a ceiling on expectations as it does a floor on achievement.

5) James Rodriguez would struggle
If Danny Murphy is to be believed – medically inadvisable, for what it’s worth – then 2014 World Cup Golden Boot winner, eight-time league champion in four different countries and former fourth-most expensive player in the world James Rodriguez was “a bit of an unknown to some teams at the start of the season”. Teams who, it must be said, should probably part with their scouting departments at the first opportunity.

He had a vague point in fairness: that no-one truly knew how Rodriguez would adapt and adjust to the English game. Then he dominated West Brom without making a single sprint in 78 minutes and it became more about how it would adapt and adjust to him. If pre-assists really are a thing then the fact he has more than any other player thus far with six is noteworthy. His connection with Lucas Digne is enough to drive most previously content couples to jealousy.

Eberechi Eze of #cpfc on #efc's James Rodriguez being the toughest player he's faced in the Prem: "He was picking off passes & you're like, 'I don't know how he even saw that. What made you do that?' He looked like a crazy player."https://t.co/2OJMugdDMd

4) David Moyes would be sacked
Elijah Wood and Charie Hunnam were nodding along furiously when David Moyes “struggled to pick any positives” from defeat to Newcastle in September. West Ham desperately needed points at home to a team expected to struggle, but Steve Bruce was in one of those moods.

The sale of Grady Diangana to rivals West Brom, vocally criticised by the captain, no less, had created a toxic atmosphere not helped by successive losses and a lack of summer transfer activity. Soucek was their only first-team signing, a loanee bought permanently, at a time when their fixture list read: Arsenal (a), Wolves (h), Leicester (a), Tottenham (a), Manchester City (h), Liverpool (a). The manager was in serious danger. Yet they faced six members of the previous season’s top eight before October was out and lost only to the Gunners and the champions – both 2-1 to goals five minutes from full-time. Moyes, under pressure from a board that had already relieved him of his duties little over two years ago, has benefited more than perhaps anyone from the lack of fans invading pitches, fighting Mark Noble and displacing corner flags.

3) Frank Lampard was not good enough
The caveat is that Chelsea have beaten teams currently in 11th, 15th, 16th, 17th and 20th, their only Premier League games against sides in the top half ending in drastically conflicting draws against Southampton and Manchester United, as well as a defeat to Liverpool that sent Frank Lampard into an alternate dimension.

But as the man himself might suggest before chuckling and transitioning immediately into a more serious point, you can only beat what you’re up against. Chelsea have done that as often as most clubs while navigating comfortably through their Champions League group. Only Bayern Munich and PSG have scored more league goals in Europe’s top five divisions than the Blues, who have conceded a single goal in their last seven games. Edouard Mendy, Thiago Silva, N’Golo Kante, Hakim Ziyech and Timo Werner all warrant some of the credit for that but it turns out the clown is more than a mere mascot. A monstrous run of fixtures between now and the start of January will give a clearer assessment of this team, but the manager has already confounded the expectations placed on him.

2) Manchester City were title favourites
While there was a relatively even split between Liverpool and Manchester City when it came to pundits and experts, the latter was given the pre-season edge by the bookmakers. It is safe to say anyone tipping Pep Guardiola’s side for title glory was foolishly lured in by their form in the final ten games of last season: eight wins, 30 goals, two narrow defeats – and particularly that 4-0 thrashing of the champions, which saw stock in the word ‘statement’ rise to record levels.

The pressure was off, of course. Defeat when it actually mattered to Arsenal in the FA Cup semi-final seemed far more indicative of a team that would still flounder and frustrate against organised opposition who arrived with a plan. Another 2-0 loss to a north London side four months later leaves City firmly entrenched in mid-table, Guardiola scanning through his new two-year contract for the fine print within and some arse-achingly familiar problems to address before the title even becomes a vague consideration again.

1) Jose Mourinho was past it
Tempting as it is to quote every naysayer, link to every critic and scoff at each detractor, there simply are not enough hours in the day, slices of humble pie in the world nor servers on the internet to cope with the volume of those who thought Jose Mourinho was done, that the game had moved on without him and Tottenham had sold their soul to an outdated devil for some Amazon coin. The only people who never considered those views were Mourinho himself and a besotted Daniel Levy. Anyone who claims otherwise is fibbing.

An insipid defeat to Everton on the opening day now looks to be one of the more curious results of the season. Mourinho repeated more than a couple of times that he “did not like his team” while warning that “some” players “were really in trouble”. His third season had arrived with barely 90 minutes played of his first full campaign. Yet Tottenham are unbeaten since then, the only Premier League club with a goals against column still in single digits, one of the most potent attacks in Europe and a manager that revels in proving people wrong. The coaching dinosaur is not extinct just yet.