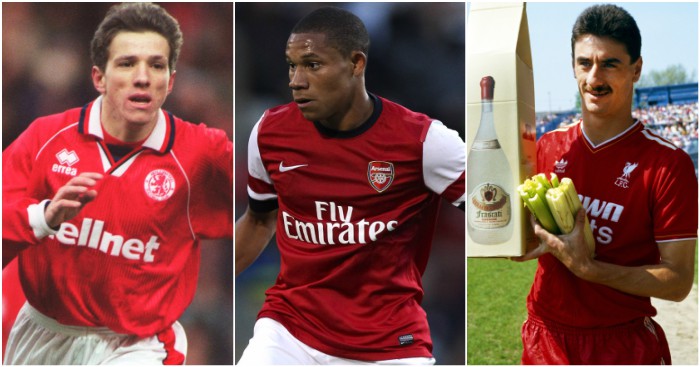 10. Gerard Deulofeu (Everton to Barcelona)
He’s only 23 but Deulofeu has certainly been about. From Barcelona, the winger had had spells at Everton, Sevilla, Everton again, AC Milan, and now he’s back where it all began after Barcelona activated the clause they inserted when they sold him to the Premier League for £4.3million in 2015.

It’s not immediately clear what plan Barca have for Deulofeu. It has reportedly cost the Catalans £10.5million to re-sign the frustratingly inconsistent winger but, at this stage, it is a massive stretch to suggest he could challenge Neymar, Lionel Messi or Luis Suarez for a regular first-team place. Enjoy those splinters, fella.

Real didn’t hang about, bringing back Carvajal less than a year after sending him to Germany at the cheapest possible price. Ever since returning in 2013 he has been a regular, winning pretty much everything there is to win and seeing off the challenge of Danilo, who joined Man City instead for £26.5million.

8. Denis Suarez (Villarreal to Barcelona)
Like Deulofeu, Suarez has squeezed a lot into a fledgling career that began at Man City and has taken in spells at Barcelona, Sevilla, Villarreal and Barca again.

Suarez’s first spell at the Nou Camp in 2013-14 was spent flitting around the B squad, but 95 senior appearances at Sevilla and Villarreal refined the midfielder enough to tempt the Catalans into paying €3.5million to bring him back shortly after his full Spain debut. Suarez was happy to take Xavi’s No.6 shirt, but made only 12 league appearances as Barca surrendered the La Liga title to Real.

7. Luis Garcia (Atletico Madrid to Barcelona)
The former Liverpool favourite is another who Barca brought back after selling him as a youngster. Following three loan spells, Garcia was sent to Atletico Madrid, who paid €3.6million for a winger who promptly netted nine goals in 30 appearances. That convinced Barcelona to give Atletico their money back with a €1.4million sweetener for Garcia.

A year and four goals in 25 appearances later, Barca raked in £6million from Liverpool, with new manager Rafael Benitez having worked with Garcia at Tenerife. Garcia’s signing was announced on the same day as Xabi Alonso’s arrival. Worked out alright for Liverpool, that…

6. Alvaro Morata (Juventus to Real Madrid)
Morata may be only 24 with just 126 league appearances to his name, but the Spain striker has now fetched transfer fees totalling in excess of £110million.

His first move was between Real Madrid and Juventus in 2014, when the Old Lady paid £15.8million for Carlo Ancelotti’s back-up centre-forward. After 15 goals in 63 Serie A appearances over two seasons, Real took up the option they retained to repurchase Morata for £23million. It was presumed Real would sell him on immediately for a hefty profit, but Karim Benzema’s backup still weighed in with 15 goals as Real won the La Liga title and retained the Champions League. That ratcheted up his value, with Chelsea said to have agreed to fork out close to £70million if add-ons become payable.

5. Casemiro (Porto to Real Madrid)
Clear as mud, this one. Real sent Casemiro on loan to Porto for the 2014-15 season. The Brazil international impressed enough for Porto to activate the £10.75million option they had to make his loan move a permanent one. But Real had a clause of their own, entitling them to take him back immediately for £5.2million, presumably in addition to the fee Porto had just stumped up.

Casemiro returned to Madrid and, after being largely ignored by Rafa Benitez, established himself in Zinedine Zidane’s XI, playing crucial roles in two Champions League triumphs and a La Liga title.

4. Wellington Silva (Fluminese to Arsenal)
“He’s absolutely stunning to watch,” said Arsene Wenger as he prepared to send Wellington on his sixth loan move. At least this one was a little closer to home – Bolton, after five previous stints in Spain.

Arsenal fans never had the chance to verify Wenger’s claim since he never played in the first team before being allowed to join Fluminense last year. The Gunners, though, retained a £3.5million buy-back option, which they have now exercised in order to sell on the striker to make a quick £1.5million profit. Bordeaux are the apparent patsy.

3. Juninho (Atletico Madrid to Middlesbrough)
No-one on Teesside wanted to see the little Brazilian leave Boro in 1996, so the relegated club inserted a buy-back option into the £12million deal that took him to Atletico Madrid. “That option is not there for show,” said Boro chief executive Keith Lamb. “It’s there because we have a genuine interest. If he wants to leave Spain, we can have him back here at Middlesbrough.”

After a disappointing, injury-ravaged spell at the Vicente Calderon, Boro, by now back in the Premier League, followed through on that interest but only a loan could be agreed in 1999. A brief return to Brazil preceded Juninho eventually going back to Boro on a permanent basis.

2. Ian Rush (Juventus to Liverpool)
Juventus bought Rush for £3.2million – a record for a deal involving a British club – in 1986 but allowed him to stay at Liverpool on loan for the 1986-87 season. In truth, he wasn’t worth the wait for Juve, for whom Rush only scored seven goals.

1. Luther Blissett (Milan to Watford)
Blissett’s 27 First Division goals for Watford led AC Milan to make the Hornets a £1million offer they couldn’t refuse, according to Graham Taylor at least: “Milan offered us a deal that we couldn’t turn down and it would have been morally wrong to prevent Luther from going.”

Blissett struggled in Serie A, scoring only five goals, with the Rossoneri refusing to employ the direct route to their frontman. Blissett, who apparently complained that “no matter how much money you have here, you can’t seem to get Rice Krispies”, moved to Italy with a clause in his contract offering Watford first refusal if he was to leave the San Siro. Watford took up their option, buying Blissett back for £550,000  and thus making a tidy £450,000 profit on the centre-forward who scored 21 goals during his first season back in English football.