So Liverpool might be looking at a Timo Werner Plan B. These all paid off despite not being first choice. 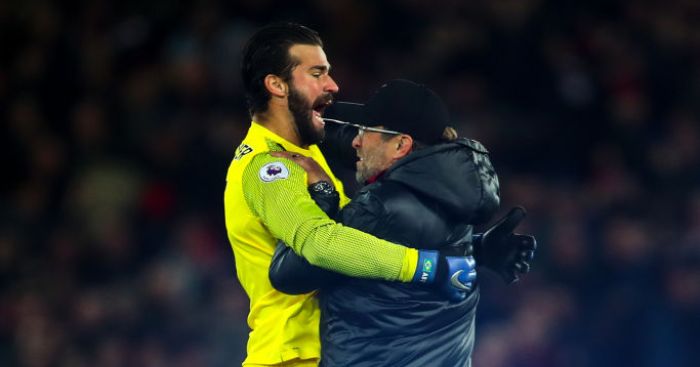 Liverpool might soon be looking for a Timo Werner transfer alternative. If they can match these Plan Bs they ought to be delighted.

10) Jens Lehmann instead of Sebastien Frey (Arsenal)
There is an alternate reality in which Sebastien Frey has a statue dedicated to him outside Emirates Stadium. The Frenchman is depicted sprawling at the feet of Samuel Eto’o to intercept a sumptuous Ronaldinho pass and launch the thrilling Arsenal counter-attack from which Robert Pires opened the scoring in the 2006 Champions League final.

A comically long-running transfer saga almost reached its merciful conclusion in 2003 when, in their search for a David Seaman replacement, Arsenal considered the Frenchman who had established himself as one of Serie A’s most reliable performers at Parma. Frey proved too expensive, however, and the Gunners were back to square one.

Arsene Wenger, reluctant to actually recognise the existence of Graham Stack – while noting that “even Stuart Taylor accepts that maybe he is still a bit too young to lead the team for a whole season” – instead settled for a short-term solution that ended up lasting four seasons. Lehmann joined aged 33, became an Invincible, won the FA Cup and earned the first red card in Champions League final history. Not bad for a stop-gap.

9) Heung-min Son instead of Saido Berahino (Tottenham)
The tendency with sliding doors moments is to wistfully consider a missed opportunity. It is human nature to ponder what might have been, to think of only the most idealised outcome as a form of self-reproach for failing to take a chance. The worst-case scenario is never contemplated in hindsight, only an exaggerated version of the best possible result.

But it works both ways: those doors can open up a prosperous new world just as easily as they can slam shut in anyone’s face. Tottenham must therefore look back on West Brom’s belligerence and stubbornness in the summer of 2015 with immense gratitude. Daniel Levy felt compelled to defend the club after three bids ranging from £15m to £23m for Saido Berahino were rejected, leading to Son Heung-min’s arrival from Bayer Leverkusen in late August.

“It’s like when you are in love with some lady,” Pochettino said of Berahino on the day of Son’s arrival. “There are a lot of women around the world, but you want only one. Sometimes it is impossible. It’s about love. And in football it is the same.” Berahino has scored 12 goals in 96 games since; Son has 16 in this suspended season alone.

8) Alan Shearer instead of Roberto Baggio (Newcastle)
‘Douglas Hall had been the real instigator behind Alan’s shock signing,’ wrote Terry McDermott, former assistant to Kevin Keegan at Newcastle, of the world-record signing of Shearer in his 2017 autobiography.

‘If he had something in his mind he would try to deliver. Sometimes his ideas were a bit over the top, but he would still try to go for it. He tried once to sign the top Italian striker Roberto Baggio. We arrived unannounced at Juventus and knocked on the door. Douglas said: “I’m Douglas Hall of Newcastle United in England. Who do I speak to in order to sign Roberto Baggio?” The Juve official told him there was no-one at the club available to talk about Baggio and, in any case, he was not for sale. So Douglas and the rest of us had to slope out of the ground and head back to Turin Airport.

‘Not to be defeated, Douglas wondered whether we could now find the money to try to sign Alan Shearer.’

McDermott’s timeline is a little confused, of course, perhaps by the fan that demanded Andy Cole be replaced by the Ballon d’Or-winning Italian on the St James’ Park steps in January 1995. Baggio left Juventus a year before Newcastle signed Shearer, so there’s little wonder they couldn’t discuss a sale.

7) Michael Essien instead of Steven Gerrard (Chelsea)
“How can I leave after a night like this?” asked Steven Gerrard on the Ataturk Stadium pitch in the early hours of a May morning in 2005. It was a rhetorical question Liverpool unnecessarily sought to answer for much of that summer.

Chelsea tested choppy waters with a British record £32m bid in July. The Liverpool rejection was prompt but Gerrard’s response no less so: the midfielder turned down a £100,000-a-week contract extension and declared his intention to leave for Stamford Bridge.

The following day, he signed a new deal to commit his future to Anfield, stating: “I’ve only one medal left to win at Liverpool and that’s the Premiership. Liverpool is the only place I’ve ever wanted to win it.”

Chelsea took the setback well. They had courted Michael Essien of Lyon for months but crystallised their interest when Gerrard became unavailable. At the former’s official unveiling, Mourinho even responded to a question about which midfielder he would have preferred by simply responding: “Maybe I could have had both.”

6) Sami Khedira instead of Steven Gerrard (Real Madrid)
Steven Capulet and Jose Montague have been fluttering eyelashes, exchanging messages and sharing a forbidden footballing love for years. Mourinho’s “favourite enemy” has developed something of a taste for playing hard to get with his “dream” manager.

The only problem was that Real Madrid wanted Gerrard “to cause a war at Liverpool to get out” in 2010. Mourinho had reportedly identified him as a priority in his first summer at the Bernabeu but it was not to be.

‘Real Madrid are closing in on the £8.5million signing of Stuttgart midfielder Sami Khedira amid cooling interest in Liverpool captain Steven Gerrard,’ said a Daily Mail article that July, in which Gerrard was described as the Spanish club’s ‘primary target’ with an off-putting £35m valuation.

5) Mesut Ozil instead of Frank Lampard (Real Madrid)
Mourinho would repeat the trick of targeting a Premier League stalwart before settling on a burgeoning talent from that year’s World Cup. England were little more than collateral damage for Mesut Ozil in South Africa, the German thoroughly embarrassing most who crossed his path until Spain stood firm in the semi-finals.

It was enough to catch the £16.6m attention of Real, but not before Mourinho tried to arrange a reunion with Frank Lampard in the capital. “Both are great players who always give everything,” he said of the Chelsea midfielder and Gerrard, yet the price for either proved too prohibitive, never mind the pair of them together.

4) Alisson instead of Jan Oblak (Liverpool)
Jurgen Klopp has been spoiled. Where once he accepted alternatives if his first choice was unattainable – Sadio Mane instead of Ousmane Dembele and Mario Gotze, Andy Robertson over Ben Chilwell and Steven Caulker as a Plan B to Alex Teixeira – he rarely settles now. The German waited months for Virgil van Dijk and a year for Naby Keita, such was his insistence that only they would do.

Yet one of his best signings was not his initial preference, if reports are to be believed. It was claimed by the wholly unbiased Slovenian media in October 2018 that Liverpool made an ‘important offer’ for Jan Oblak the previous summer, only for the goalkeeper to turn them down and leave the Reds with the consolation prize of Alisson.

For what it’s worth, Klopp seemed to reference a vague interest in Oblak around the time Alisson arrived for “crazy money”. It was a choice with no real wrong answer.

“I thought we’d clinched the deal, but when I flew to Paris to speak with him, the goalposts seemed to have moved somehow. It was a big disappointment at the time, but we signed Cristiano Ronaldo that very same summer and perhaps we wouldn’t have ended up with Ronaldo had we got Ronaldinho.”

Sir Alex Ferguson will always be grateful for the apparent divine intervention of Ronaldinho’s “people” in summer 2003. Wanting to emphatically replace David Beckham, Manchester United entered Paris Saint-Germain’s unequivocally non-silent auction for the Brazilian, with Barcelona winning the £21m ballot as, in the words of PSG president Francis Graille, United had “been too sure of themselves”.

“I really thought the manager got him,” Paul Scholes would later recall, before revealing that United spent a subsequent pre-season friendly against Barca “trying to boot” Ronaldinho for the rejection. They ended up with Cristiano Ronaldo instead, so it was no disaster.

2) Ronaldinho instead of David Beckham (Barcelona)
But that transfer web was multi-layered. United and Barcelona only battled for Ronaldinho after the latter failed to sign David Beckham from the former.

It was a peculiar situation, unbecoming of Premier League champions. United took the unusual step of officially announcing that a £25m deal to sell Beckham to Barca had been agreed in principle, contingent on Joan Laporta winning the upcoming Nou Camp presidential election and, well, Beckham actually negotiating personal terms, never mind agreeing them.

“David is very disappointed and surprised to learn of the club’s statement,” was the response of Beckham’s agency. “David’s advisers have no plans to meet Mr Laporta or his representatives.”

His heart was set on Madrid, not a troubled Barca side that had barely scraped into the UEFA Cup first round. But Laporta had achieved his objective in shooting for the moon and landing among the stars. He had, after all, promised Beckham, Thierry Henry or Ronaldinho as part of his successful manifesto. The Brazilian was by far the easiest to deliver, particularly behind the Beckham smokescreen.

1) Eric Cantona instead of plenty of players (Manchester United)
Depending on which source you believe, Alex Ferguson might have scanned past as many as four names before scrawling Eric Cantona’s on a note for Martin Edwards in November 1992. It is common knowledge that David Hirst was targeted, while moves for Matt Le Tissier, Brian Deane and Alan Shearer were mooted then and since.

“Dion Dublin broke his leg against Palace,” Ferguson himself said in 2013. “So we started scouring about trying to get someone in. Peter Beardsley wasn’t really playing for Everton at the time so I went to Martin Edwards’ office.

“When I was in there the phone went, it was Bill Fotherby from Leeds asking if we’d sell Denis Irwin. During the call I wrote Cantona’s name on his pad. They said they would come back to us in half an hour. Half an hour to discuss a player like Cantona? Something like that should have taken five days. I knew there was something up and they came back to us and said they’d sell him for £1million. We signed him the next day.”

To think, the dominant team of the early Premier League era might never have established themselves as such had Dion Dublin not broken his leg, Sheffield Wednesday just accepted a £3m offer or Leeds not underestimated the importance of Denis bloody Irwin.