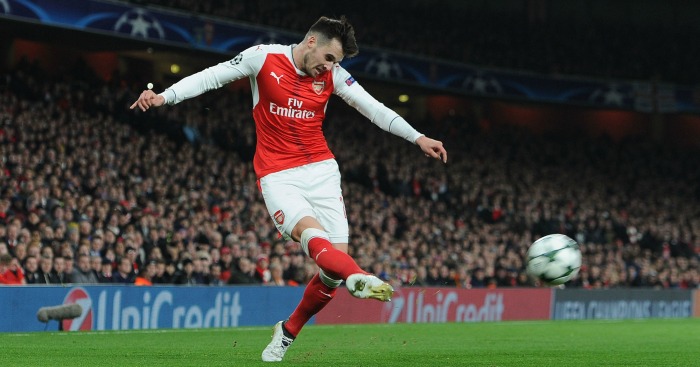 The 19-year-old started the season on the sidelines, with fans demanding his immediate restoration to the starting line-up. Their wish was granted by September following a combination of bright substitute appearances and poor performances from his teammates. But his last Premier League start came in November, and he has played just 48 minutes of football during a busy December. He has also gone 16 games without a goal in all competitions, his last strike coming in September.

Rashford is undoubtedly a fine talent, but his development is being thwarted, and Mourinho can hardly be blamed for not dropping Zlatan Ibrahimovic to accommodate his young star. A brief loan spell at another Premier League club could revitalise him.

9. Arsenal – Right-back
When Tony Pulis insisted that Arsenal “have definitely got the stronger squad” in comparison to Premier League leaders Chelsea, he was referring to the fact that the Gunners could bench Aaron Ramsey, Lucas Perez and Nacho Monreal as they eked out a 1-0 victory over West Brom on Boxing Day. Olivier Giroud, the goalscorer, was given his first Premier League start of the season.

Indeed, this might still be Arsenal’s strongest ever squad, but one particular area of weakness remains. What happens when Hector Bellerin is not available?

Bellerin has missed just three Premier League games this season. Arsenal fielded a different replacement in each, with Carl Jenkinson, Mathieu Debuchy and Gabriel taking turns to stake their claims at right-back. The trio underwhelmed to differing degrees, and it remains the one position where the Gunners really could do with some reinforcement.

8. Manchester City – Centre-half
Back in December 2015, we published a similar list of the ten problems that clubs should have looked to fix the following January. Crystal Palace have since signed their striker, Liverpool have solved their full-back problem, Arsenal purchased the central midfielder they needed, and Manchester United filled the striker-shaped hole in their squad with a Zlatan Ibrahimovic.

Manchester City are the only club who, 12 months later, still have the same main problem. In fact, it would be fair to say they have been looking for the answer at centre-half for some time. Vincent Kompany is perennially injured, John Stones is a work in progress, Nicolas Otamendi remains questionable, and Aleksandar Kolarov is a joke gone too far. Perhaps Pep Guardiola has already marked the date down in his diary for Eliaquim Mangala’s triumphant return from his loan spell at Valencia.

7. Crystal Palace – Defence
Crystal Palace have scored 29 goals in 18 Premier League games this season. That is more than all but the current top four.

Crystal Palace have conceded 33 goals in 18 Premier League games this season. That is more than all but the current bottom two.

It is only natural, therefore, that Crystal Palace are linked with strikers, not defenders, in the January transfer window. Sam Allardyce could well be their most important defensive signing – a manager who will prioritise clean sheets and coach how not to concede at set-pieces – but a new arrival at the back would not go amiss.

6. Chelsea – Wing-back
Six players have started every fixture in Chelsea’s 12-game Premier League winning run. Thibaut Courtois has been the ever-present goalkeeper; Cesar Azpilicueta, David Luiz and Gary Cahill have been the central-defensive rocks; Victor Moses and Marcos Alonso have been the revelations of the season.

In the cases of the goalkeeper and three-man central defence, Chelsea have ready-made replacements. Asmir Begovic, Kurt Zouma, John Terry and Branislav Ivanovic are not quite as good as their first-team counterparts, but they are adept back-ups. Somehow, it is Moses and Alonso who the Blues cannot afford to lose. They are one injury or suspension away from Ivanovic as a wing-back, or the inexperienced Ola Aina being called upon. Azpilicueta would do a typically fine job on either the right or left, but Antonio Conte would be averse to moving him out of the centre. They need cover.

5. Everton – Depth
Everton are really weird. They are equally capable of beating Arsenal to end their 14-game unbeaten run as they are of losing 5-0 to Chelsea. They are seventh, but are closer in terms of points to 14th-placed Burnley than sixth-placed Manchester United. They are the leaders of a chasing pack who never look capable of catching the elite.

Their squad might be a problem. Ronald Koeman has used 23 players in the Premier League this season. The only teams to have used fewer players after 18 games are the promoted trio of Burnley (22), Hull (21) and Middlesbrough (22), as well as the horribly malnourished Swansea (22), and a West Brom (21) whose manager favours a tightly-knit group of trusted individuals. Chelsea have also only used 20 players, but relying on such a small pool of talent is more forgivable when you win 12 games in a row and top the table by seven points in December.

Of the 23 players Koeman has used, it is also important to remember that the list includes Tom Davies, Arouna Kone and Dominic Calvert-Lewin, a trio who have been handed a combined 123 minutes this season. Everton’s squad as a whole requires improvement, particularly with money in reserve.

4. Liverpool – Forward
“Sadio’s away and we have to find solutions,” said Jurgen Klopp earlier this month, discussing the prospect of losing Sadio Mane for up to a month as Liverpool’s stalwart embarks on African Cup of Nations duty for Senegal. The answer could come from within, be that through a system change or with particular personnel stepping up. Is Daniel Sturridge ready for his chance in the first team? Can Divock Origi grasp the opportunity?

There is one other option. A solution, Klopp said, could come “under very specific circumstances, in the transfer market”. The German is no fan of the January window, but necessity could demand that Liverpool make a move to strengthen their title bid. Replacing Mane’s goals, assists and overall effectiveness will be no simple task, but the Reds must find a way.

3. Leicester – Central midfield
The form of Riyad Mahrez may be an increasing worry for Leicester as they embark on a battle against relegation, but their problems in central midfield should not be overlooked. Their most reliable position of last season has become one of their biggest issues this.

Daniel Drinkwater and N’Golo Kante started 35 and 33 Premier League games respectively as Leicester won the title last season. Fast forward a matter of months, and Daniel Amartey (13) has started the most this campaign, with Drinkwater (12), Andy King (10) and Nampalys Mendy (1) next. Consistency and reliability has been replaced by a lack of quality and assurance. Kante was always going to be a huge miss, but Leicester have still yet to even attempt to replace him.

2. West Ham – Striker
Because it went so well last time. West Ham openly pursued an elite striker throughout the summer, courting Carlos Bacca, approaching Alexandre Lacazette, chasing Jamie Vardy, and even attempting to persuade Zlatan Ibrahimovic that the London Stadium could be his new home. They ended up with Simone Zaza.

Slaven Bilic must again prioritise signing a striker, but their struggles so far this season should deliver the necessary reality check. The Hammers are not ready for sustained European football, and so should not waste time looking to sign strikers at that level. But with seven different players being used as central strikers this season, it is clear that the club needs a solution. And Michail Antonio, for once, is not that solution.

1. Swansea – Defence
Task one will be to appoint a new manager. Task two will be to strengthen a defence that would probably struggle in League One.

At right-back, Swansea can call upon either Kyle Naughton or Angel Rangel. At left-back, their options are Neil Taylor or Stephen Kingsley. At centre-half, the quartet of Jordi Amat, Federico Fernandez, Alfie Mawson and Mike van der Hoorn inspire confidence throughout the side. Looking at that list of players, describing any as ‘above average’ would be generous. Swansea’s squad as a whole is the weakest in the Premier League, but that defence is criminal.

Now watch them appoint Alan Pardew before the turn of the year, with the expectation that he can rescue them from relegation. Because he loves clean sheets and set-pieces, you see.