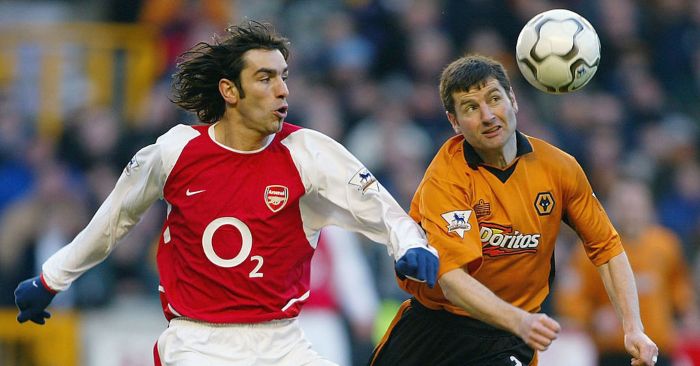 You’ve had ten of the most overrated footballers of all time. Now let’s Blazin’ Squad all up in here and flip-reverse it. And yes, there is a Man Utd player on this one, too.

10) Robert Pires
It is not difficult to deduce why David Ginola is universally considered a Premier League icon. His undeniable style, grace and aura are certainly contributing factors but his prominence during the revamped top flight’s formative years in the 1990s indelibly links him to so many quintessential moments and memories. And in a country that almost fetishises glorious failure, any attacking member of Kevin Keegan’s Newcastle Entertainers – a footballing tautology, if ever there was one – retains a certain mystique and acclaim.

Robert Pires is somehow not remembered as fondly outside of his own club. Yet the Arsenal legend played an almost identical number of Premier League games to his compatriot and produced far better numbers. His 198 matches brought 62 goals and 41 assists, while Ginola’s 195 resulted in 21 goals and 45 assists, albeit at lesser clubs than the Gunners after his Newcastle exit.

Most acknowledge Pires was great; few realise just how great. He was, at his peak, as good as any Arsenal player outside of Thierry Henry and as important as most in challenging the Man Utd monopoly, while his 2001/02 season was legitimately one of the best individual campaigns of any player in Premier League history, cut cruelly short by injury.

Throw in two Golden Goal assists in the World Cup last 16 and Euro 2000 final, as well as inspirational performances in unlikely Ligue Un title challenges for Metz and Marseille, and you have a player who did not possess quite the same alluring air as some, but who more than made up for that in divine talent.

9) Robert Lewandowski
Lionel Messi and Cristiano Ronaldo have raised the bar to such an extent that the world seems wholly unsure what to do when someone of a similar age starts to reach it before them. Kylian Mbappe and Erling Haaland’s exploits can be explained away as preternatural brilliance and generational excellence. What, then, of 31-year-old Robert Lewandowski?

It seems like unerring, elite-level consistency is only lauded in certain cases, Lewandowski excluded. With an international record better than a goal every two games and a Bundesliga scoring rate closer to Gerd Muller than any of his other contemporaries, that is something of an injustice.

8) Miodrag Belodedici
The name might not be immediately familiar but the achievements are no less impressive. Miodrag Belodedici won eight straight league titles and four consecutive league and cup doubles across spells with Steaua Bucharest and Red Star Belgrade in the 1980s and early 1990s, guiding Romania to the quarter-finals of the 1994 World Cup and Euro 2000.

He was also one of the game’s finest liberos and the first player to feature in two European Cup final victories. Belodedici played the full 120 minutes of both the 1986 and 1991 deciders for Steaua and Red Star respectively, keeping out the more attacking, adventurous Barcelona and Marseille in goalless draws before shootout wins. Franz Beckenbauer and Gaetano Scirea helped modernise and popularise a role Belodedici quietly mastered.

Miodrag Belodedici, the most overlooked central defender of all time. The Romanian won the European cup twice, for Steaua București & Red Star Belgrade, which was both teams only ever win.

A leader and technical CB that was dominating European football for years.

7) Denis Irwin
It is an inexact science, but when the official Premier League website published a poll last summer placing Man Utd stalwart Denis Irwin fourth of the five options for the competition’s best left-back ever, it put into focus just how much he has been taken for granted. Those who genuinely believe Leighton Baines to be superior should have their right to an opinion rescinded.

The Ireland international suffers for a variety of reasons. He is something of an anomaly at Man Utd: neither a product of their youth system, nor an influential maverick foreigner or member of the pre-Ferguson old guard. He joined from Oldham in 1990 after taking them to the semi-finals of the FA Cup and final of the League Cup, before becoming one of the unheralded cornerstones of one of the sport’s most dominant eras.

Only three players have won more Premier League titles and just five outfielders played more minutes for Man Utd in their Treble campaign, yet the Irishman tends only to listen in on the Ashley Cole and Patrice Evra-dominated conversation of greatest left-backs. Brilliant though they were, Irwin might argue that he was more consistent and dependable for longer. You can count the mistakes he made over a decade on one finger, never mind one hand.

6) Jimmy Floyd Hasselbaink
What strikes you first is the lack of any discernible weakness, followed by the surfeit of strengths. Jimmy Floyd Hasselbaink was as strong as an ox and as fast as a cheetah, with a leap like a salmon, the grace of a swan and the skill of whatever creature is imbued with an arse-tonne of skill. It made sense that he was quite a raw, animalistic striker.

To finish as top scorer in seven consecutive seasons for five different clubs in three countries is silly. Hasselbaink registered double figures for goals in 11 campaigns, from 1995/96 with Campomaiorense to 2005/06 at Middlesbrough, helping the latter to a UEFA Cup final and Cardiff to the FA Cup final in his last year before retirement.

Even at perhaps his lowest ebb, relegation with Atletico in 2000, he scored against Real Madrid and Barcelona and only missed out on the Pichichi by three goals. Hasselbaink is one of three players to win the Premier League Golden Boot with two different clubs, but curiously never seems to be mentioned in the same breath as Alan Shearer and Robin van Persie.

5) Jimmy Greaves
There were knighthoods for manager Alf Ramsay in 1967, tournament star Bobby Charlton in 1994 and, most painfully of all, hat-trick hero Geoff Hurst in 1998. The 1966 World Cup launched Jimmy Greaves into the stratosphere in an alternate timeline, but fate and injury transpired to keep England’s best striker out of their greatest success in reality.

The figures really are startling, from the lesser seen Serie A and FA Cup double of 1962 to the 46 years for which he reigned as the all-time highest goalscorer in Europe’s top five leagues before Cristiano Ronaldo finally overhauled him in 2017. As intriguing as it would be to see how the Portuguese would have fared all those years ago, it is even more tantalising to consider how brilliant – and more revered – Greaves could have been in the current day.

4) Steve McManaman
Many players irreparably damage their name in retirement. Some taint their previous success with failed stints as managers, while the many routes into punditry are littered with ruined reputations and discarded renown.

To a generation, Steve McManaman is an irritating co-commentator and nothing more. Those who watched him thrill in midfield decades ago will know that is a gross misrepresentation of someone who posted ludicrous numbers in an unsuccessful Liverpool side and whose tactical flexibility would have lent itself wonderfully to the modern game.

A failure to really impress for England outside of Euro 96, combined with the nature of his Liverpool exit and underwhelming manner of his Manchester City spell, means McManaman might forever be overlooked in his own city, never mind his own country. That he managed to thrive at Real Madrid speaks the sort of volumes that tend to be muted whenever he is near a microphone.

Strongly of the view he is the most underrated English and Liverpool player of the last 30 years.

And say what you want about us but we rarely underrate a player.

3) Gerson
“I respect his opinion, but I don’t agree,” said Gerson, tearing up Pele’s infamous FIFA 100 list. “Apart from Zidane, Platini, and Fontaine, I’m behind 11 Frenchmen? It’s a joke to hear this.”

You can understand his frustration. Gerson, the best player at the 1970 World Cup, had been ignored by his former Brazil teammate in favour of such luminaries as El Hadji Diouf and Hong Myung-bo. It was an insult to perhaps the country’s greatest ever creative holding midfielder, and one of the best in history.

Pele, of course, has at least inadvertently ensured that many a Brazilian legend has had their excellence overshadowed. Garrincha, Jairzinho, Didi, Heleno de Freitas and Arthur Friedenreich are among those who deserve more than to be rendered mere footnotes in his all-encompassing career. Gerson is no different.

2) Fernando Redondo
Real Madrid are hilariously childish. That is common knowledge. They pick their own nose, have no regard for personal space and throw tantrums in supertransfermarkets when they aren’t allowed to pick their favourite player off the shelf. So when they finished as runners-up to Barcelona by a point in successive La Liga seasons, on both occasions after final-day defeats to Tenerife, they responded as you might expect: by waiting one more failed campaign before just appointing their manager and signing their best player in 1994.

In came Liverpool-versus-Chelsea fan Jorge Valdano, midfield metronome Fernando Redondo and, for the first time in a barren half a decade, a La Liga title.

That alone cannot be attributed to the Argentinean’s impact but something clearly clicked for Real once he joined. Los Blanco won one Copa del Rey between 1990 and 1995, then two La Liga titles and two Champions Leagues in the subsequent five years before Redondo left in 2000.

If Claude Makelele was worthy of having the name of a position bestowed upon him, so too was the smooth operator he replaced. Redondo’s display against Man Utd in that glorious Champions League quarter-final remains one of the best individual performances from a visiting player at Old Trafford. Henning Berg, Sir Alex Ferguson – “What does this player have in his boots? A magnet?” – and Gary Neville must still have nightmares. Beautiful, previously long-haired, one-touch nightmares.

1) David Villa
It might be a consequence of having to share the spotlight with disgraced brother Aston, but it does not feel as though David Villa is as venerated as he should be. It is not as if every player has lifted successive major international trophies as the competition’s top goalscorer, as the Spaniard did at Euro 2008 and the 2010 World Cup.

Barcelona might regret not signing him sooner; Villa perhaps rues not leaving at his peak. Valencia managed to squeeze a fifth stupendous season out of him but had he moved to the Nou Camp in 2009 as opposed to 2010, Pep Guardiola’s European dynasty could have come to fruition. Much the same can be said for Villa’s tibia break in December 2011, which ruled him out of Euro 2012 and surely contributed to the club’s baffling failure to beat Chelsea in the Champions League semi-finals.

Also Villa one of most underrated players in history… for a man who’s been top scorer in Euros and scored in a CL final. One of the best strikers I’ve ever seen

His goal in the 2011 final of that competition to sink Man Utd was about as picturesque a finish as one could ever wish to see on the biggest stage. Villa even secured his third La Liga title with Atletico in 2014. It was a wonderful career that delivered so much yet somehow deserved even more in terms of silverware and fanfare.