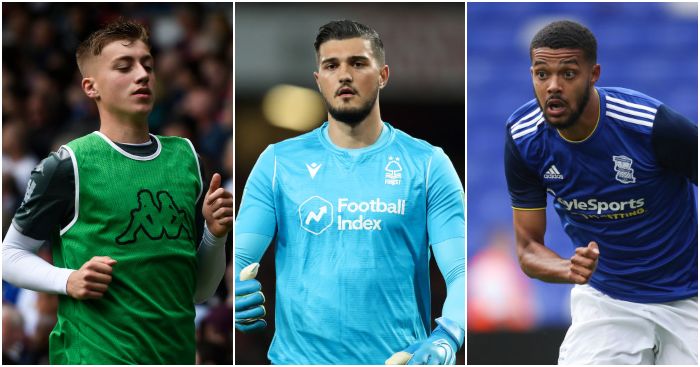 You have had the best, now let’s rank the worst…

10) Robert Sanchez – Rochdale (on loan from Brighton and Hove Albion)
Judged on his spell as a whole in greater Manchester, Sanchez might not even make this list, but such was the woefulness of the Spanish goalkeeper’s performance against Peterborough United in September that a spot here was destined for the 21-year-old.

Sanchez has looked largely capable of being a decent League One shot-stopper but his decision-making – especially in the 6-0 reverse against the Posh – leaves much to be desired. Prior to that match, Sanchez had conceded just three times in five matches but is yet to keep a clean sheet since, implying that his back line have lost confidence since being hit for half a dozen in Cambridgeshire. And no, only conceding once in 90 minutes against Manchester United is no cause for celebration.

9) Cameron Carter-Vickers – Stoke City (on loan from Tottenham Hotspur)
Another who isn’t here for playing atrociously (they are to come later), but Carter-Vickers has not made the desired impact on a Stoke side in desperate need of fight, cheer and, most of all, defensive order.

The on-loan Tottenham defender helped the Potters to a rare clean sheet on Saturday and is benefiting from more playing time thanks to a switch to a three-man defence at the Bet365 Stadium, but a stalemate at the division’s second lowest scorers is hardly a sign of long-term growth at the back.

#USMNT Cameron Carter-Vickers went the full 90 for Stoke today in their 0-0 draw v. Brentford and put in quite the performance. Blocked 1 shot, 2 interceptions, 3 tackles, won 5/6 duels, 85% passing, and had 4/6 accurate long balls. Good to see the big man playing so well.

Uncomfortable in possession despite being a ball-playing defender and in the midst of a fourth mediocre Championship loan spell, do not expect the American to become Mauricio Pochettino’s latest young first-teamer.

8) Joao Virginia – Reading (on loan from Everton)
Another goalkeeper on the list and this time from one of the big boys. Big things were expected of the Portuguese who also spent time on the books of Arsenal as a youth player.

It is at that level where Virginia shone with Everton, winning the Under-23 Premier League with nine clean sheets from 13 games. Unluckily for the 19-year-old, a move to the Championship appears too big an initial jump, and after a poor start to the season, Virginia has lost his place to the rather more experienced Rafael Cabral.

7) Jake Clarke-Salter – Birmingham City (on loan from Chelsea)
Chelsea centre-back Clarke-Salter’s position on this list is self-explanatory. From a man with one Chelsea substitute appearance to his name so solid that John Terry remarked “he could be the man to replace me” back in 2016 to the 22-year-old being yet to make his Birmingham City league debut three years later.

A couple of years ago..SS showed a Chelsea vs Spurs u21 game. I watched & at CB in that game w/ a kid called Jake Clarke-Salter was Tomori. Won’t lie that day I was super impressed w/ JCS didn’t foresee future for Tomori at Chelsea. Glad to have got that wrong. Kid is a baller.

A loan spell of passage to Vitesse was largely successful on a personal note, but this season, the defender’s sole appearance was in a 3-0 EFL Cup defeat to League One Portsmouth. Maybe a permanent move is next on the cards…

6) Andre Green – Preston North End (on loan from Aston Villa)
Preston North End are perhaps the best performing side on this list, but they are not without sin when it comes to loaning in disappointing players this season. Perhaps it is the performance of their superbly underrated team that is stopping Green from getting his chance, but three league appearances with no goals or assists is not the end product Aston Villa were expecting when they agreed to let the winger go for the season.

Against his parent club’s city rivals Birmingham on Saturday, there was no space in the match-day squad for the 21-year-old and considering it was yet another victory for the Lilywhites, it may be a while before Andre meets the green grass again.

5) Kieran Dowell – Derby County (on loan from Everton)
It is perhaps not the fault of the attacking midfielder himself that Dowell’s start to life at Derby has not been glorious. For the first time in some time, this is a Derby team whose success should not be measured on immediate promotion, but rather in sustainable growth. That is what manager Philip Cocu provides after all.

The problem for Dowell is that he is only here for the short term and without a defined role in the Dutchman’s system, the 21-year-old is suffering an identity crisis. One assist in six games which have largely passed the former Nottingham Forest loanee by means Dowell could be an early sacrifice of the Cocu era.

4) Dan Barlaser – Rotherham United (on loan from Newcastle United)
Such was Rotherham’s intent to entice the Newcastle midfielder to New York Stadium that manager Paul Warne as his backroom staff travelled to the north east to deliver an in-depth presentation on how the 22-year-old would be utilised in South Yorkshire.

The reality has been very different though and Barlaser has struggled to fit the three-man midfield system favoured by the Millers and has lost his place in the side so early in the season. With a plethora of midfield options ahead of him in the pecking order, the Gateshead-born operator may well be searching for his next temporary home in the summer of 2020.

3) Jack Clarke – Leeds United (on loan from Tottenham Hotspur)
Clarke was bought by Tottenham as a result of his stellar breakout season form with Leeds United in 2018/19. Far from the finished article, the 18-year-old winger was sent back to Marcelo Bielsa’s side for the season to ply his trade further in the second tier.

That was the plan, but the reality has been far different. Clarke is yet to make a match day squad this season and already this looks like a mistake that could so easily have been avoided. Such is the Argentine manager’s commitment to the cause that his tight-knit squad bleed for the shirt the Bielsa way, so a player who won’t be at Elland Road next season was never likely to play much of a part in his promotion push. Tottenham must be smarter next summer.

2) Matt Clarke – Derby County (on loan from Brighton and Hove Albion)
There must be something in the surname. And there must be something about Brighton, because this is the fifth time they have featured across these two lists. Unfortunately for Clarke, his terrible loan spell at Derby thus far is having the biggest impact away from the AMEX. Alongside the ever-stable Richard Keogh (in recent seasons at least), Clarke has looked anything but, especially in his defending and conceded penalty at Leeds over the weekend.

Clarke was one of League One’s star centre-backs last season with Portsmouth, so much so that Brighton felt compelled to part with £3.5million over the summer before immediately farming the 23-year-old to the Rams. With so many over-performing centre-backs already at his parent club, Clarke may be waiting some time to make his debut for the Seagulls.

1) Arijanet Muric – Nottingham Forest (on loan from Manchester City)
Top of the list and another member of the goalkeeping union, this is the Number 1 spot Muric did not want to occupy. For much of last season, he was named as City’s substitute goalkeeper following the injury to previous incumbent Claudio Bravo and it is a great loss to comedy that he never made his Premier League bow as his performances against Championship attacks have left much to be desired.

Many questioned the signing of the Kosovo international on loan given fellow ‘shot stopper’ Brice Samba’s summer arrival but the jigsaw has been rearranged since Muric’s early season mishaps and his Congolese counterpart has since deputised to rave reviews during Forest’s best run of form in years.

Muric was number 2 at City last season. He will be lucky to be that high up the pecking order come the end of this season at Forest, and that is why he takes number one on this list.

I look at Muric’s body language. I’m not sure he wants to be here. And he’s certainly not playing like it. Worse case. He gets recalled. And bring Luke Steele back from Millwall for cover #nffc