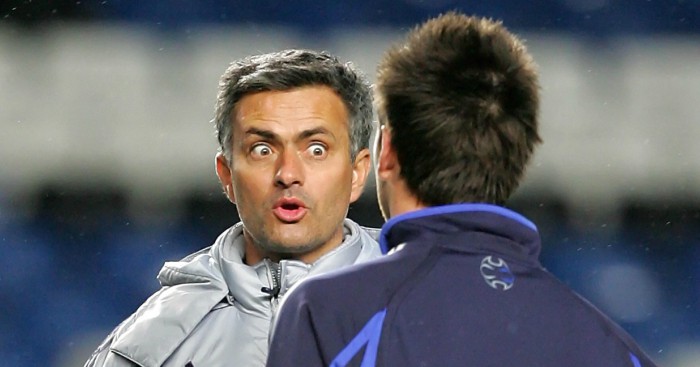 John Terry has revealed that Jose Mourinho would give him the silent treatment when he was injured.

The former Chelsea captain has spoken effusively about his former manager – and current Manchester United boss – to The Coaches’ Voice.

“From the moment Jose came in, I knew I wanted to be a coach,” says Terry. “Before then, as a player, I just went out on the pitch and played. Didn’t think about the training sessions, the coaching, the size of the pitches we’d train on, anything. Then I saw something special, and it was all about preparation.

“He’d be out there at 8am, putting out cones, making sure there were enough bibs, enough balls. He brought ballboys into the training ground to make sure we would get balls back on the pitch as soon as possible. As a group of players, not just me, we all took note of how good he was right from the start.

“And not just on the training pitch, but away from it too. On the mental side.

“On reflection, there was a couple of times I was injured, not available for a couple of games coming up. Jose would come in, he wouldn’t even speak to me in the treatment room. He’d go around and speak to everybody, and walk out of the room and leave me.

“I swear, as captain of the football club, I was there thinking: “Why has he not spoken to me?” I said to the physio: “I’m training tomorrow. I can’t have the manager not speaking to me.”

“He knew exactly what he was doing. He knew how to press my buttons, but he also knew when to give me a cuddle, when to tell me I was the best, when to tell the press that me, Frank, Didier, Petr, Ashley were the best players in the world. I promise you, as a player, you went out there thinking you were the best.

“That had an impact on our performances, and that was down to Jose. Were we the best in the world? Probably not. But he made you feel like you were.”