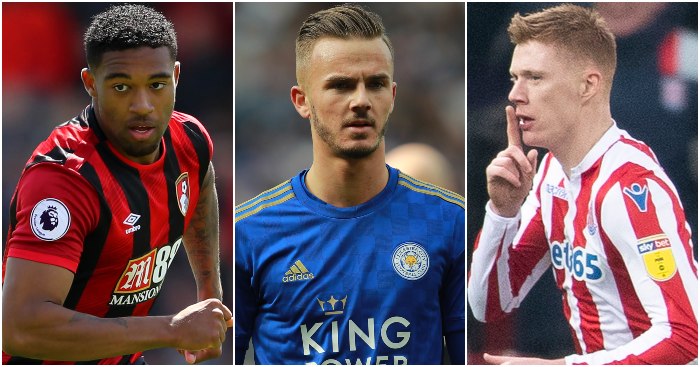 16) Alex Pritchard (Norwich to Huddersfield, £12m)
The midfielder joined Town in January 2018 for anything between £10million and £14million, depending on who you believe. So we have split the difference. “I think it will be the right club for me,” Pritchard said at the time. “Just the way they play football and the togetherness of the team is a perfect fit for me.” Less than a season and a half later, the 26-year-old is heading back to the Championship – passing his former club on the way down – with a different manager who is clearly yet to be convinced by the midfielder.

Pritchard was an inconsistent presence in Town’s XI last season and Jan Siewert shifted him into a wide position for Town’s last few matches in the top flight as part of his experimentation for their next campaign. Pritchard did well on the right against Manchester United but, in fairness, this was his opposition…

Luke Shaw has been voted Man United's player of the year. This was him vs Huddersfield. Says everything about their season pic.twitter.com/gAOpPG8dJM

15) Ezri Konsa (Brentford to Aston Villa, £12m)
Brentford completed some good business, buying Pontus Jansson from Leeds for £5.5million a few days before selling Konsa to Villa for a profit of around £9million on the fee they paid Charlton for the England Under-21 centre-back last summer.

Dean Smith worked with Konza at Griffin Park and though the Villa boss describes his seventh signing of the summer as “a high-potential player”, it remains to be seen whether he is ready to play as a starting centre-back straight away alongside Tyrone Mings.

14) Lloyd Kelly (Bristol City to Bournemouth, £13m)
The England Under-21 full-back became the sixth £10million-plus signing in the space of a year for little Bournemouth, who apparently fended off interest from Liverpool and Arsenal for the Bristol City academy graduate.

That’s presumably because Kelly has been promised a regular place in Eddie Howe’s first XI next season, either on the left or in the centre of the Cherries’ defence. City boss Lee Johnson, who has been very vocal in his praise for a ‘Rolls Royce of a player’ reckons the 20-year-old will become a centre-back in the long term but, initially, Kelly will fight with Charlie Daniels and Diego Rico for the left-back spot. “I genuinely think he’ll play for England at senior level,” said Johnson, though many thought that about Jordon Ibe. Speaking of whom…

13) Matt Targett (Southampton to Aston Villa, £14m)
We’re guessing somewhat on the figure because no one seems to have a clue how much Villa paid for the left-back. Some reports say it’s £11.5million rising to £16million, others suggest it’s £14million up front, with another £3million in add-ons. Regardless, the 23-year-old hasn’t come cheap for Villa.

Saints were reluctant to lose their former England Under-21 defender but no longer could they keep him in reserve in case they ever broke Ryan Bertrand. Being able to buy an exciting new striker for a similar amount as they made on a home-grown, stand-in full back was a deal too good to turn down.

=9) Jordon Ibe (Liverpool to Bournemouth, £15m)
“It was a tough one but I needed to think what was best for me, which is playing, and when you scale it up, Liverpool and Bournemouth are fighting for the same things,” Ibe told The Times in 2016 in an interview which has not stood the test of time at all well. “Liverpool are not in the Europa League so would it really make a difference? And I would have more chances to play at Bournemouth than Liverpool so it doesn’t really matter.”

=9) Sam Clucas (Hull City to Swansea City, £15m)
The Swans signed Clucas for an eye-watering figure without really having an idea of where they might play him. The former Mansfield, Chesterfield and Hull utility player was a victim of his own versatility to a certain extent but justification of his fee was barely evident in his performances – unless Arsenal were the opponents – during one miserable season at the Liberty Stadium.

Upon relegation, it seemed like Clucas might stay in the Premier League with a move to Burnley on the cards until the Clarets refused to budge over personal terms. Swansea eventually clawed back £6million of their investment when Stoke took the 28-year-old off their hands. Once he recovered from knee surgery – by which time a third of the season had passed – Clucas became a Potters regular in the Championship, but he seems to have most to lose should Nathan Jones sign Nick Powell from Wigan.

=9) Ben Gibson (Middlesbrough to Burnley, £15m)
Joe Hart was Burnley’s headline signing last summer but Gibson was the most expensive. Neither worked. Hart is desperate for another move this summer while Gibson just wants a taste of the action.

The centre-back, once called up for the England senior squad in 2017, currently has a goal-a-game record with Burnley owing to his strike in a 5-1 defeat at Everton on Boxing Day, his only Premier League appearance so far for Burnley. A hernia problem at the start of the season didn’t help but Dyche obviously saw nothing in training from his joint-record signing to tempt him to break up the Ben Mee-James Tarkowski partnership.

=9) Che Adams (Birmingham to Southampton, £15m)
After Targett had been bundled off the Ralph Express at New Street, Saints immediately got Adams on board after failing to pick up the Birmingham striker in January.

The centre-forward, who turns 23 later this month, caught Hasenhuttl’s eye with 22 goals in the Championship last season – the most in a single league campaign for the Blues since Trevor Francis 41 years ago.

The Ralph Express rolls on!

8) Calum Chambers (Southampton to Arsenal, £16m)
Half a decade after the then-19-year-old joined Arsenal, we still don’t know if he fits into the Gunners’ plans. Probably not. For two of the last three seasons, he has been shipped out on loan to Middlesbrough and Fulham with both sides being relegated. Which is probably just a coincidence.

Moving to Arsenal was enough to earn Chambers an England cap – three in fact – under Roy Hodgson. Three years after his senior debut, Chambers was playing for the Under-21s at the 2017 Euros.

7) Harry Maguire (Hull City to Leicester City, £17m)
It seemed steep at the time but, two years later, Leicester are set to make close to a five-fold return on Craig Shakespeare’s investment. That is if they sell Maguire, which they should only do if they receive an offer too good to turn down. And if that comes from Manchester United, would the 20-cap England defender be better off staying where he is?

The Foxes could finish above United next term…

6) Andre Gray (Burnley to Watford, £18.5m)
‘If you want a striker to score some – but not many – goals against bad defences but look worrying blunt against other sides, Gray’s your man. For £18.5m.’ we wrote upon the striker’s big move to Watford in 2017.

Two seasons on, not much has changed. Gray netted five goals in his first season at Vicarage Road and seven last term, most of which he watched from the bench amid only 13 starts. Troy Deeney is more likely to win a full cap than the former England C striker.

5) Alfie Mawson (Swansea to Fulham, £20m)
The centre-back was considered something of a bargain when the Cottagers won the race for a 24-year-old who four months previously had been called up by Gareth Southgate without getting on the pitch against Italy. But like the rest of his Fulham team-mates, Mawson had a stinking 2018-19.

Injuries offer the former Barnsley and Swansea defender some mitigation. But the fact Mawson has had surgery on the same knee twice in the space of a year, the last occasion after injuring himself while changing his boots, will caution some Premier League clubs who might be looking to rescue him from Fulham’s sinking ship.

4) Tyrone Mings (Bournemouth to Aston Villa, £20million)
Villa seem to be this year’s Fulham, certainly in terms the number of signings they have made and the number of deals the Premier League new boys are aiming to do before the start of the season. The purchase of Mings has raised most eyebrows so far purely because of the fee Villa paid Bournemouth for a player the Cherries were quite happy to part with for much of last season.

But the deal suggests the Villans are wary of Fulham’s mistakes last term and in Mings, having tried before they bought, they know exactly whet they are getting. Some at Villa Park will tell you it’s a bargain.

3) James Maddison (Norwich to Leicester, £22.5m)
Leicester are pretty good at this. Maddison might not fetch quite as much as Maguire but the attacking midfielder would still earn the Foxes a three-fold return. Not that they want to sell or that he wants to leave after only a year at the King Power Stadium.

But what a year! The 22-year-old was the only player in the Premier League to create 100 chances so it is no wonder half of the Big Six are sniffing. Gareth Southgate is rather harder to impress, evidently.

2) Jordan Pickford (Sunderland to Everton, £25m)
Everton’s record signing had yet to win a senior cap when Everton made him their record signing in 2017 but two years later, Pickford has 19 of them, having established himself as Southgate’s undisputed No.1.

That doesn’t mean he’s everyone’s cup of tea. ‘There’s just too much going on,’ wrote Winty last week. ‘While Gareth Southgate is trying to engender an era of calm, smooth, possession football – and failing, because of various reasons outlined below – Pickford is getting his rave on. Every game. All game.’

But Everton would still double their money if they took Pickford to market and the England gloves look to be his for the foreseeable future.

The technique 👌
The celebration 💪

1) Aaron Wan-Bissaka (Crystal Palace to Manchester United, £50m)
Here comes Wan-Bissaka, blowing everyone out of the water with his big move to Old Trafford.

When a young player moves to United or any big club, a first cap rarely follows far behind. But Wan-Bissaka has a lot of competition for the right-back spot in Gareth Southgate’s senior squad, with Kieran Trippier being squeezed out by Kyle Walker and Trent Alexander-Arnold this summer.

Wan-Bissaka went instead with the Under-21s to the European Championships, where he did his cause little good on Aidy Boothroyd’s watch. A 95th-minute own goal in the opening defeat to France led to Boothroyd dropping the 21-year-old, claiming the United target had “had his head turned”. Which the manager apparently didn’t spot before the defeat… just another thing to add to Boothroyd’s charge sheet.