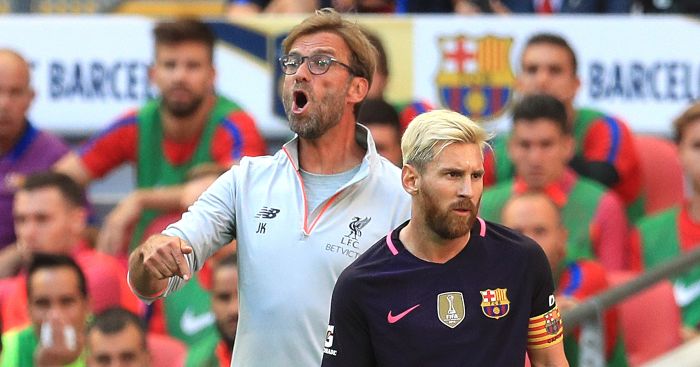 Start with part one here, then move onto part two here, and finish with this: part three of John Nicholson’s irreverent look at how football has changed this decade…

The way the game is played – or, at least, is striven to be played – has changed markedly in the last ten years. In 2009/10 the whole football world seemed to be in ever greater thrall to the Barcelona model of strangling a game by never giving the ball away, and if they did they’d cheat by diving, fouling, crying wolf and other general sh*thousery until they got it back. This was becoming the new gold standard of football and it would be so for the next few years.

Some thought it was Year Zero: a new artform that had pulled football up to new graceful Olympian heights of sophistication. Others found it airless, sterile and were bored by the interminable sideways passing. For some, this was football reduced to mere exhibition, with all blood drained. You could admire them dispassionately, intellectually and statistically, but unless you were a supporter, the pulse didn’t race often enough to shock us back into consciousness.

You certainly didn’t need to play that way to win the title in England in 2010 as Chelsea proved by playing Didier Drogba up front, scoring 37 goals across the season, 29 in the league. Drogba was less tiki-taka and more high-performance tank. The Blues scored a record 103 goals that year. Other top scorers this past decade have included Dimitar Berbatov, Carlos Tevez, Robin van Persie, Luis Suarez, Sergio Aguero, Harry Kane and Mo Salah.

But even so, Barcelona’s success impressed and just as importantly, so did their huge passing and possession stats. Remember how excited people would get when possession tipped over 80% as though it was more thrilling than scoring goals? That was an odd period.

They were the best, so you at least tried to copy the best, was how the logic went and thus more and more people started wearing Barcelona shirts down the pub with Messi on the back.

Trouble was, most teams did not have the one-off genius of Lionel Messi, nor the breadth and depth of playing staff that were equipped with the skills or patience needed. Arsenal tried it every year for the whole decade to no great success, at times afraid to shoot, seemingly terrified it would be thought too crude to lash one in from 25 yards and that a 78-pass move, ending with a backheel into the net from three feet, was in some way innately superior or got you more points. At times, it was laughable.

Even now, we still see teams trying to play it out from their own box with players who are just not good enough on the ball to be able to do it successfully, thus they get caught in possession and concede easy goals. In these ways, the stain of Barcelona of 2009/10 has not yet washed out.

When not sniffing mince on the breeze, Brendan Rodgers was fond of calling this possession approach ‘death by football’. Well it was certainly deathly, but it was successful – at least for Barcelona domestically, less so for the Gunners and Brendan, so you could see why football’s hive mind was keen to copy. But the fact that its firmest acolytes made it into an almost moral imperative to do so was always utterly ridiculous. It was never a higher form of the game, just a different one. But for a few years anyone challenging this attempt at mindwipe was dismissed as a dinosaur. The New World was here and if you didn’t get with the programme you’d never win anything ever again. It was always nonsense.

Then Pep Guaridola arrived. City already had their Aguero moment, possibly the decade’s biggest domestic drama. But the money and where it came from has spoiled many a neutral’s appreciation of City’s brilliance this decade and for all of Guardiola’s intense genius, that hasn’t really changed. Does he have many years left in Manchester? It seems unlikely.

Real Madrid, featuring the extraordinary CR7, dominated the Champions League for years this decade. His limitless, preening narcissism and constant need to expose his body to public scrutiny would keep psychiatrists busy for many years. As my missus once said: “If you came home looking like that I’d make you eat pies.” But the fact remains: the kid can play. Oh yeah.

Meanwhile, CR7’s kryptonite, Messi had his fair share of terrible haircuts and shared his obsession with tax evasion, a disease that the too-rich-to-spend-it-all often suffer from. It didn’t make us feel any better about modern footballers.

The obsession with possession football passed as Dortmund popularised ‘gegenpressing’ under Jurgen Klopp (ironically it was something that Liverpool used to do all the time in the mid and late 80s when Ian Rush would harry defenders routinely). And with Barcelona only making and winning one Champions League final after 2011, while suffering some very tasty and very high-profile beatings in the process, perhaps doubt in the veracity of their ‘way’ crept in and opened the door to new ways.

Today, of course, the high press has replaced possession obsession and dominates the landscape in a more profound and comprehensive way than Barcelona’s strangulation ever did. Now we even hear fans at amateur games shouting for their team to “beat their press”, so ubiquitous has it become.

In 2019, under this new orthodoxy, the idea of death by football now seems preposterous. Like everything that was recently very fashionable, it now looks rather dated and a bit silly. The high press and the counter-attack are everything. The quickest route from defence to attack is thrillingly back in fashion with Liverpool leading the way to such devastating effect that as someone pointed out this weekend, a corner to the opposition should now be regarded as a goalscoring chance for Liverpool.

The sight of the Reds in full flight as they tore Leicester City apart on Friday (who themselves had done much to shatter the illusion that long-ball football was both stupid and unsuccessful by winning the league rather brilliantly booting it for Jamie Vardy to chase) was a win for everyone who always knew that very fit blokes running very fast towards goal with the ball was one of football’s eternal pleasures and stirred the blood more than a game of short passes played at little more than a gentle trot.

It was a win for everyone who always knew that getting it wide and whipping it at pace into the box for some big or clever sod to head or volley it into the net was also one of football’s eternal pleasures. There’s a wider realisation now that the sturm und drang of fast, aggressive, direct football is a great spectacle and devastatingly effective when played well. No longer is anyone afraid of the opprobrium of style snobs for kicking it long possibly because it has been rebranded as playing ‘fast and direct transitions’, which sounds so much posher than “get some f*ckin’ snow on it”.

So now I assume, if history is a guide, everyone will want to play like Liverpool as they sweep all before them. But then, not all teams will have the best, most thrilling pair of full backs in world football, nor a front three of such speed and mercurial liquidity. So they will fail. And by 2030, another fashion will assert itself as football’s hurdy gurdy turns around and around.

And that’s the take away point from this decade of football. Don’t be fooled into thinking the new way, whatever that is, is THE way. It’s just a phase. Everything is just a phase. There is no right way, there is no wrong way, there is only the way that works best for the resources your club has at its disposal. Football is a blend of skill and physicality. Too much of either without enough of the other makes for a dull game. Get the mix right and you have something that thrills time and again.

Is 2019/20 better than 2009/10? It’s impossible to say. There’s no way to be definitive about such things. The game is faster for some sides, partly because of the lean towards counter-attacking. Defending is currently out of fashion and those of us who loved a hard-fought 0-0 – yes, we do exist – are likely to be on starvation rations for a few years. Tackling has been replaced by harrying in the top flight. But further down the pyramid and in Scotland, the sight of a defender clearing a striker into touch still elicits the biggest cheer of the day. Some traditions are worth keeping. We hold these truths to be self-evident.

While there are those who are obsessed with seeing the present as superior to any notional time in the past (I don’t know why; it must be a psychological need) football remains mercurial and has mysteries it will never surrender to analysis. That’s why we kept coming back to it, decade in, decade out.

However, top-flight football now faces an existential crisis. The majority of people who like football can’t or won’t access it on TV. The amount of financial remuneration in the game is morally offensive to many. The relationship between grotesque wealth, consumption and the climate crisis is ever more profoundly understood, perhaps especially by younger people. The new boss will not be the same as the old boss.

Transfer fees have ludicrously skyrocketed, agents are draining money out of the game in obscene amounts, wages have hit £3 million per year not as a peak but as an average. Some are picking up over £20 million annually. The rich are getting obscenely rich off the backs of the working poor. It is little short of disgraceful. Calls to boycott clubs don’t gain much traction but then, when you’re working three jobs to make ends meet and still need to use a foodbank to make sure your kids are not hungry, boycotting your football club is not a high priority and with 10 million people classed to be in the precariat – one pay day from the street – such oppression makes rebellion even harder. After all, when you’ve grafted for too long for not enough, you just want to spend what free time you’ve got having a good time, not taking to the streets to foment revolution. And that’s not accidental. That’s how those with power and money like it. An exhausted, depressed, medicated, pliant population is much easier to bend to our overlord’s will.

A core of clubs now dominate both domestically and across Europe, only allowing interlopers into the cabal through gross mismanagement and even then, just briefly. To many the ‘higher’ you go in the pyramid the more distasteful and appalling the whole business of modern football becomes. Yet the honey that drips from the Premier League hive is too tempting for many and is leading to financial crisis in the EFL at a time when strong, positive leadership is absent.

The fees paid for broadcast rights has brought us to where we are. But the nature of football broadcasting is approaching an event horizon. The old Sky model is broken and as out-of-date as the rusty old satellite dishes that cling to the walls of so many houses. Change is coming in a way it wasn’t in 2010.

I know it’s hard, I know the road is dark and the journey is long. But we are the people and we are many and we are strong. Let’s begin to take this journey together so that when 2029 comes to a close, football is once again politically, financially, economically and culturally by the people, for the people and of the people.

It still is and always was The People’s Game. But we have had it stolen from us.

We should take it back.