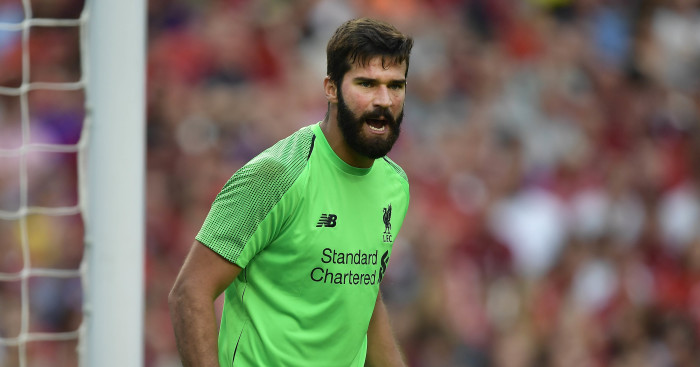 Liverpool
A triumph of moving early and moving decisively.

Indeed, so efficiently did Liverpool deal with this transfer window that there’s almost nothing new to add. Their business was wrapped up weeks ago and has been dissected and analysed. But apparently this needs to be more than 100 words, so we’ll crack on.

While Liverpool clearly had to pay top whack to do so, they have recognised areas in need of improvement, identified the players to solve those problems, and then bought them.

Other clubs have not been able to get this done, with the early transfer window closure they themselves voted for seeming to catch them by surprise.

Football may not be paid or played on paper, but a glance at the business done (or not done…) by the Big Six says the post-window, pre-actual-football assessment has to be that Liverpool have made the largest strides both in closing the gap on those above them and easing clear of those below.

Alisson may make the most obvious difference. Goalkeepers will always catch the eye for better or worse, and he is such an upgrade on Liverpool’s previous options that the difference will be stark and obvious. He doesn’t even have to carry the “world record fee for a goalkeeper” burden now.

Everyone has known about Naby Keita’s arrival for some time, and Xherdan Shaqiri’s arrival for £13m looks like a canny bit of low-risk, high-reward opportunism. He’ll not be a regular starter, but he’s always going to be there to Offer Something Different.

Fabinho, though, may prove the best work of the lot. Tiemoue Bakayoko’s ever-diminishing reputation since their Monaco partnership was ended points to Fabinho’s influence and ability to elevate those around him. Jordan Henderson has had a great summer; he might look better still a year from now.

It’s hard to find fault with any of Liverpool’s business since grudgingly accepting defeat in the Philippe Coutinho departure beyond a more general grump at the state of transfer fees these days. Nabil Fekir would have been nice, but not crucial.

The only ‘headache’, such as it is, is that with great windows come great expectation. There can be no excuses now: this is a Liverpool squad and manager that absolutely should be challenging for the biggest prizes. The excuses have gone.

Arsenal
A new manager in the Emirates hotseat will be enough of a novelty for Arsenal fans this season. A whole generation of Gunners have never known the like.

But they’ve also had a quietly impressive transfer window. Without meaning to cast aspersions in either direction, it’s almost a supermarket own-brand version of Liverpool’s. Crucially, like Liverpool, Arsenal appear not to have been caught out by the early shutdown of transfer proceedings, and moved quickly to sort out some of the admittedly massive problem areas in the squad.

They’ve also managed to do so at prices that are, in a climate where Jack Grealish is apparently worth £35m and Jay Rodriguez £20m, frankly bargains.

While circumstances forced Chelsea into a hugely expensive late move for a goalkeeper, Arsenal had already procured a young (in goalkeeping years anyway) Champions League keeper at a fraction of the price.

Arsenal’s uncharacteristically proactive approach worked like a charm there, as it did in agreeing a deal for Lucas Torreira before any World Cup premium kicked in. Given that £26m barely gets you a promising Championship midfielder these days, it’s a great bit of business.

They have also bought a centre-back who, almost by definition, has to be an improvement on what was already there.

There has also been some necessary fat-trimming. It’s a shame to see Jack Wilshere go, but it’s also the right decision for all concerned. Ditto Santi Cazorla with knobs on. Lucas Perez won’t be remembered with such fondness, but off he goes.

Throw in the January signing of Pierre-Emerick Aubameyang, who did perfectly well (10 goals in 13 games) at the back end of last season but whose benefit should be fully felt in this campaign and it’s all looking pretty rosy. As long as you ignore all that pesky Stan Kroenke unpleasantness, of course.

Fulham
An absolute corker of a window after sealing promotion back to the Premier League.

Alfie Mawson for £15m and the Calum Chambers loan are enormously sensible signings for a side aiming to consolidate in the top division after four years away. Bringing Aleksandar Mitrovic back is riskier, but last season’s efforts mean the volatile Serbian was less of a gamble for the Cottagers than he would be for anyone else.

And then there’s Andre Schurrle and Jean-Michael Seri. It would have been a solid enough window without those two. And they did not slow down on deadline day either.

Throw in the relatively fuss-free manner in which Ryan Sessegnon has been retained and it all adds up to a fine summer’s work. Very tidy indeed.

Crystal Palace
The primary objective has been achieved. Wilfried Zaha remains a Crystal Palace player, and if they had done nothing else all summer that alone would have rendered the window a success. There is surely no other player of greater importance to his side’s fortunes in the Premier League. Maybe David De Gea – widely acknowledged as the best goalkeeper in the world – at a push could be considered, as could World Cup Golden Boot winner Harry Kane.

But retaining Zaha has not been the sum of Palace’s work. Max Meyer is a delicious gamble. The fact he was even available for a side of Palace’s standing tells you all is not rosy, but after reinventing himself from the Next Lionel Messi to the Next Gennaro Gattuso he had arguably his best-ever season at Schalke last term and if he settles could turn out to be the best bit of work this summer.

It could all go the other way and he’ll be refusing to train by November, but never mind that. It’s a gamble well worth taking.

Xherdan Shaqiri
He may not have been to blame for Stoke’s relegation, but he has still been handsomely rewarded for the Potters’ Premier League demise, jumping straight to a potential title battle. I’ve got a sneaky feeling the barrel-shaped magician is going to be enormously important for Liverpool somewhere along the way this season.

Tottenham’s Young Midfielders
SPOILER ALERT: There will be (lots and lots) more on Spurs in tomorrow’s Losers yin to the Winners yang, but what a time to be a gifted youngster at Hotspur Way.

The likes of Luke Amos and Oliver Skipp have earned rave reviews in pre-season and the route to Tottenham’s first-team midfield suddenly looks absolutely wide open with only the masterful yet ageing Mousa Dembele, permacrocks Harry Winks and Victor Wanyama plus, er, Moussa Sissoko standing between the young guns and a place alongside Eric Dier in the first XI of a Champions League club. Opportunity knocks.

Jack Wilshere
Moving to West Ham may not be the biggest of horizon-broadening moves for Wilshere, but that doesn’t mean it isn’t the right one. Leaving his beloved Arsenal after all this time must have been a wrench, but he now finds himself at a club with the ambition to elevate itself to another level and will be handed plenty of responsibility as a key first-choice player under a manager in Manuel Pellegrini who is both a solid citizen and knows this sport back to front.

With England’s need for a player boasting Wilshere’s precise skillset clearer than ever after the World Cup, there could still be time for a full return on his vast promise.