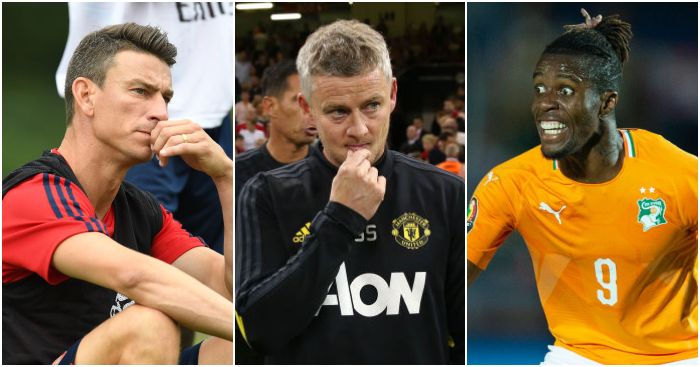 You can go ahead and check out the winners of the transfer window – but only if you agree to come straight back here afterwards. Promise?

It feels like Palace had their own summer dictated to them by Wilfried Zaha. That wasn’t an easy situation, but they’ve managed to end up on the wrong side of it. He’s exceptional, clearly, and has often been the difference between survival and relegation. However, he’s been so determined in his efforts to leave that it surely made sense to allow him to do so.

That’s the problem with talismanic players: once their engagement drops, having a team built around their abilities no longer makes quite as much sense. Of course, it’s possible that he’ll put this episode behind him and become the same force again, but that’s the hope rather than the expectation.

Elsewhere, it’s all been very underwhelming. Victor Camarasa might make a difference. He’ll bring invention, craft and technique, but that’s quite a laboured positive, particularly given the funds raised by Aaron Wan-Bissaka’s sale.

Maybe it comes down to this: for Palace fans, is there any reason to be enthused by the season starting? Not ‘wildly optimistic’, but just intrigued by the prospect of something more than just another struggle?

No, not on this evidence.

But this has been a mess. Most likely, parts of the saga have been inflated by media outlets who rely on the transfer window to feed their business model. That’s nearly always true. Nevertheless, the way his ambition was communicated was badly thought-out and created an acrimony which hung over Crystal Palace’s pre-season.

It was instructive also that all of the clubs he might have wanted to join ultimately opted for younger players. Arsenal went for Nicolas Pepe (24), Spurs focused their attention on Giovani Lo Celso (23) and Ryan Sessegnon (19), and Everton believed there was more value in Alex Iwobi (23). The truth, unfortunately, is that Zaha’s chance to play Champions League football for a contending club has probably been and gone. He’ll turn 27 before the end of the year and the market is flooded with young, attacking players who might not be his superiors, but certainly represent better investments to clubs with one eye on sell-on value.

Let’s not assume that he’s going to carry a bad attitude into the season. That’s not fair, because he’s entitled to his disappointment and he should have plenty of credit in the bank at Selhurst Park. Even so, this has been a disaster.

Manchester United
They needed to do much, much more and might have done so if they hadn’t spent so much time hesitating around the Harry Maguire deal.

It’s a point Daniel Storey has made and he’s right. United were willing and able to meet Leicester’s valuation, so their dallying only really served to limit their time spent pursuing other players. That’s how the summer of 2019 looks: a couple of good additions in important areas – Maguire is better than they had already, Wan-Bissaka certainly is – but lots of work which wasn’t done.

The midfield is still a mess and the deadline day lunge for Mario Mandzukic suggests that Ole Gunnar Solskjaer remains less than convinced by his attack.

It serves to re-emphasise a concern raised time and again (on this site and many, many others): why does a club with such resources not have a proper structure with which to address the needs of its first team?  Where is the director of football, the expertise in negotiation? These were known weaknesses and they weren’t addressed, meaning that this window has followed the pattern of the last few: lots of noise, not nearly enough action.

Not enough action in either direction, actually, because Solskjaer had promised that only the fittest would survive, which suggested a ruthless purge of the squad’s more useless parts. So far, that has amounted to allowing Ander Herrera to leave on a free and selling Romelu Lukaku at a loss. It’s not quite what supporters had in mind.

That isn’t even an excuse for the problems left unsolved, because United don’t need to sell first. They’re one of few clubs in world football who can make their own moves in the market without having to rely on others. And yet there they were, scrambling around on deadline day with everybody else.

Maybe that talented group of young players will mask the boardroom ineptitude. Mason Greenwood is great, he should make it, and Tahith Chong is a fascinating prospect. But that’s a hell of a burden to carry and one which teenagers shouldn’t have to shoulder.

In ten, twenty, thirty years’ time, books are going to be written about this period in the club’s history and the chapters which deal with Ed Woodward are going to be absolutely damning.

Put the commercial partnerships aside for one minute and build a proper football team. Ultimately, have some respect for the institution. It’s the club of Busby, Edwards, Charlton, Law and Gregg and, under the Glazers, it’s been disfigured into this naff personification of modern football’s wayward priorities.

Certainly not enough selling, because there’s a wage bill problem at St Mary’s and there are players in Ralph Hasenuttl’s squad who clearly have no future at the club. Looking at you, Guido Carrillo. And you, Sofiane Boufal. And you, Mario Lemina. The European transfer window won’t close for another few weeks, but Southampton desperately needed to get out from under those contracts.

In terms of incomings, Hasenhuttl does have a few new pieces. Those who know say that Moussa Djenepo is an exciting player, but there’s a lot of pressure on Che Adams to fill the striker void at the club, particularly with Charlie Austin leaving for West Brom and Danny Ings remaining susceptible to injury (and barren form). Adams will need to start well.

Kevin Danso? Yes, okay, good player. A new starting centre-back is always an asset and Danso has that vending machine-build which is perfect for the Premier League. But the attack was the priority and that hasn’t been addressed properly.

Southampton should be fine, though. Hasenhuttl is an excellent coach who oversaw a significant improvement after arriving, but the three teams coming up are better than the ones to have departed, so there’ll be no surviving by default this time around.

And shouldn’t the aim be more than that anyway?

Laurent Koscielny
Was that worth it?

Really, having built up all that goodwill over the last nine years, he was prepared to throw it away like that? Koscielny wanted to return to France and most likely for family reasons. Fair enough: that’s a player’s right. But there are ways of doing that without torching your own reputation in the process.

Koscielny got that badly wrong, with the effect that – instead of the years of great service he gave – supporters will always associate him with the circumstances of his departure. If you ask fans to choose, irrespective of what they think about how their club is run or the people running it, they will always side against the player. And that’s exactly what’s happened: Koscielny is Robin van Persie, Samir Nasri and Emmanuel Adebayor now, and he put himself in that category quite unnecessarily.

And that unveiling? Even if it wasn’t intended to inflame the situation, it was easy to see how it might.

Daniel Sturridge
Still just 29, but currently without a club for the season.

Of course, as a free agent Sturridge can still be signed by someone whenever, but it’s a sad situation and indicative of his almost vertical decline since 2014. Injuries, injuries and more injuries. In another world, with a different body, he’d be scoring goals in the Champions League and for England.

As it is, he looks likely to see out of the rest of his career in the shadows.

Saido Berahino
Talking of low points: Stoke have just paid Berahino a lot of money to go away.

And how does someone’s reputation recover from that Glen Johnson character assassination?

We’re not here to pass judgement, because Berahino’s personal life seems complicated, difficult to unravel and, well, personal. He’s made some very bad decisions, but it’s important to understand why before damning him. Most likely, he needs help rather than condemnation and, given their gratuitous nature, Johnson’s comments probably achieved little beyond the further alienation of a troubled young man.

English football is notoriously susceptible to groupthink, meaning that Berahino is probably done in this country, but hopefully there’s some redemption to be found elsewhere.

Bruno Fernandes
Does he even exist? File him away with Leandro Damiao and Nico Gaitan. He’s probably not an invention of the Portuguese media, but he was certainly this summer’s example of why transfer reporting has its reputation.