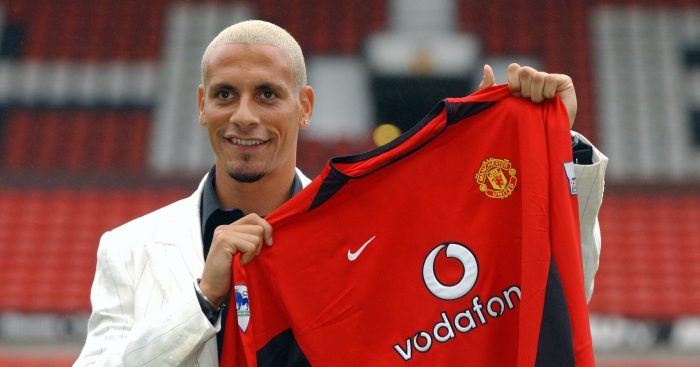 22= Emmanuel Adebayor (Arsenal to Manchester City, £25million, July 2009)
Like the lottery winner who still travels by bus and does his weekly food shop at Aldi, Mark Hughes did not let his increased fortunes change him. Manchester City made ten signings in their first full summer funded by those Abu Dhabi billions, but only two were from clubs outside of the Premier League, both of whom were free transfers. Aside from Carlos Tevez, Hughes reserved his biggest individual outlay for Emmanuel Adebayor.

22= Samir Nasri (Arsenal to Manchester City, £25million, August 2011)
Adebayor was actually something of a trailblazer in that respect. Five players packed their bags to travel from north London to Manchester in five years from 2009. Samir Nasri falls snugly in the middle of that quintet; might Alexis Sanchez join them soon?

22= Adam Lallana (Southampton to Liverpool, £25million, July 2014)
It truly is a shame that it took so long for Adam Lallana to find his footballing soulmate. The midfielder did not even realise his true potential immediately upon joining Liverpool. Instead, it was the the man who inherited him, not the man who brought him to Anfield, who helped him justify a £25million fee that, at one stage, looked truly hilarious.

22= Morgan Schneiderlin (Southampton to Manchester United, £25million, July 2015)
Only one man appears on this list twice, but Morgan Schneiderlin came closest of any player to doubling that tally.. His move to Goodison Park in January cost Everton a cool £20million; that his valuation had fallen £4million in the 18 months since he joined Manchester United tells its own story.

22= Yannick Bolasie (Crystal Palace to Everton, £25million, August 2016)
Everton have spent over £113million this calendar year, more than any other Premier League club. Ronald Koeman is undeniably building a squad befitting a side with the grandest of plans, and the Dutchman will hope to welcome £25million winger Yannick Bolasie back from injury in the new year.

22= Michael Keane (Burnley to Everton, £25million, July 2017)
Ray Wilkins would likely have been incensed to see Everton sign Michael Keane for a full £5million less than Manchester United paid for Victor Lindelof. Butch’s anger might possibly subside when he realises that the new Toffee is now the third-most expensive English centre-half in history.

16= Wayne Rooney (Everton to Manchester United, £27million, August 2004)
Manchester United paid Everton an initial £20million for the services of a wondrous teenage Wayne Rooney in summer 2004. The rest of his eventual fee was made up of ‘a complicated system of bonus payments which will relate to United’s success as a team’. The club’s captain and record goalscorer left on Sunday with 12 trophies (and four Community Shields) to his name; he probably met the criteria for those bonus payments.

16= Christian Benteke (Liverpool to Crystal Palace, £27million, August 2016)
Morgan Schneiderlin agonisingly missed out; Christian Benteke is the only man to make two appearances on this list. He will surely soon be joined by compatriot Romelu Lukaku, but the 26-year-old holds the distinction as of now after his move to Selhurst Park last summer.

13. Marouane Fellaini (Everton to Manchester United, £27.5million, September 2013)
Let it never be forgotten that Manchester United signed Marouane Fellaini for £27.5million in September 2013, despite the Belgian having a £23.5million release clause inserted into his Everton contract that expired by the end of July. Still it isn’t as if David Moyes could have possibly known such intricate details…

12= Romelu Lukaku (Chelsea to Everton, £28million, July 2014)
When Manchester United or, heck, an ambitious Chelsea, do finally sign Romelu Lukaku, his name will top this list rather comfortably. As it is, the 24-year-old will have to settle for a meagre mid-table finish, inspired by his brief but memorable sojourn at Everton.

12= Wilfried Bony (Swansea to Manchester City, £28million, January 2015)
It might be harsh to consider Wilfried Bony’s move to Manchester City as the only true failure on this list. Other intra-Premier League transfers have not quite gone to plan, but Morgan Schneiderlin and Christian Benteke, just to name two underwhelming examples, retained their sale value. When Wilfried Bony surely escapes his Manchester City trap this summer, he will do so for a fraction of the £28million outlay, and with ten goals in 46 appearances.

10= N’Golo Kante (Leicester to Chelsea, £30million, July 2016)
In 68 starts in the Premier League, N’Golo Kante has only lost to five teams. Crystal Palace, Manchester United, Tottenham, Liverpool (twice) and Arsenal (thrice) are the only sides to have bested either Leicester or Chelsea when the diminutive Frenchman has been monitoring the midfield.

10= Rio Ferdinand (Leeds to Manchester United, £30million, July 2002)
As if to illustrate just how impressive Rio Ferdinand was, second on the list of Leeds’ biggest sales ever is Ross McCormack. The striker moved to Fulham for £11million – almost one-third of what the club received for a 23-year-old who became the most expensive defender in world football for a second time.

8. Dimitar Berbatov (Tottenham to Manchester United, £30.75million, September 2008)
Few people can claim to have truly pushed Sir Alex Ferguson to his limits, but Daniel Levy is not like most mortals. At least partly assisted by a newly-minted Manchester City attempting to flex their muscles, Tottenham were able to squeeze just over £30million out of United on a frantic summer deadline day.

7. Christian Benteke (Aston Villa to Liverpool, £32.5million, July 2015)
The reason Wilfried Bony’s move to Manchester City was described as the only failure on a list also including Christian Benteke’s ill-fated Liverpool spell is not only because the Reds recouped most of their outlay, but he also scored a respectable ten goals in 20 starts. Having said that, it never did feel like a comfortable union between player and club.

6. Sadio Mane (Southampton to Liverpool, £34milion, June 2016)
Whereas Sadio Mane and Liverpool fits like hand in glove. The club’s collapse during his Africa Cup of Nations absence was no coincidence, while his debut season was curtailed by injury. Despite all that, the Senegalese ended the campaign as the club’s top goalscorer, and few would bet against the same outcome in his second year.

5. Andy Carroll (Newcastle to Liverpool, £35million, January 2011)
But Liverpool’s default setting when spending a vast sum of money on one individual is to falter. Mane is one of few true successes when the Reds dust off their wallets, and club-record signing Andy Carroll is the very epitome of the usual disappointment that means many a big signing at Anfield.

4. Juan Mata (Chelsea to Manchester United, £37.1million, January 2014)
David Moyes signed four players during his managerial reign at Manchester United. The Scot eventually had his large Belgian comfort blanket shipped in from Merseyside, but one would be forgiven for forgetting the summer arrivals of Guillermo Varela and Saidy Janko. Even during his winter struggles, Moyes saw fit only to welcome Juan Mata from Chelsea. He was sacked within three months.

2. John Stones (Everton to Manchester City, £47.5million, August 2016)
As with his international teammate, John Stones’ eventual fee could be neatly rounded off at £50million if Pep Guardiola guides Manchester City to unprecedented success in the Champions League. His first season saw him dropped for a clutch of games, but that will hopefully be a learning curve instead of a sign of things to come for the 23-year-old.

1. Fernando Torres (Liverpool to Chelsea, £50million, January 2011)
Romelu Lukaku left Chelsea in 2014 because he could not dislodge, among others, Fernando Torres at Chelsea. When the Belgian completes his protracted move to Manchester United this summer, he will finally get his twisted revenge. It is still Chelsea’s club-record transfer; it is still the biggest intra-Premier League move ever, at least for the time being.