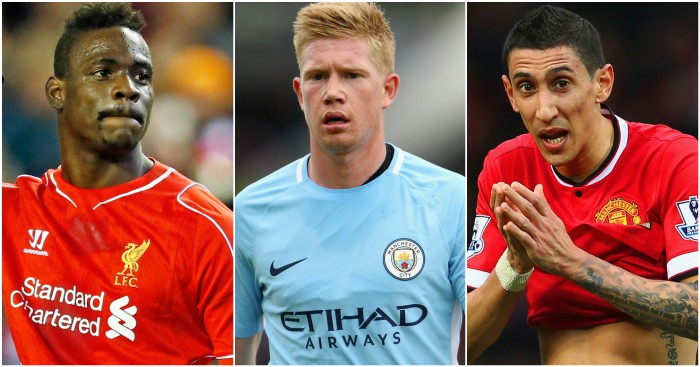 29. Pedro – £21.4m
Chelsea had better luck later that same week in August 2015, though former Barcelona winger Pedro was always more of a sure thing than Baba. The fact the Blues stole the Spain international from under Manchester United’s nose made the deal all the more sweeter.

28. Son Heung-min – £22m
That’s a million for each individual handshake the South Korea star has for his team-mates. Chuck in 18 goals and 10 assists since joining from Bayer Leverkusen on August 28, 2015, and Tottenham got themselves a bargain.

27=. Marcos Alonso – £23m
The former Real Madrid left-back gave a positive impression during spells at Bolton and Sunderland, but few people expected Alonso to play such an important role in Chelsea’s title triumph last season, with his introduction as a substitute when the Blues were 3-0 down at Arsenal ushering in Antonio Conte’s 3-4-3 revolution.

= Serge Aurier – £23m
Let’s not all pretend that we don’t to see want Mauricio Pochettino headbutt him.

25. Davide Zappacosta – £24m
It still feels like a dig from Antonio Conte at Diego.

24. Yannick Bolasie – £25m
Bolasie made an encouraging start to his Everton career after joining from Palace two days into last season but a serious knee injury has kept him sidelined ever since early December.

23=. Roberto Soldado – £26m
Now one-third of the Fenerbahce’s ‘anti Liverpool’ forward line, alongside fellow roadrunners Robin van Persie and Vincent Janssen, Soldado was the first of many to take a shot at King Harry Kane and, rather predictably, miss.

= Michael Essien – £26m
The man who calls Jose Mourinho “daddy” moved to Chelsea in August 2005 and started and started dominating midfields soon thereafter. The Blues had just scraped past newly-promoted Wigan with a stoppage-time goal from Hernan Crespo, so Essien’s introduction was timely.

= Mamadou Sakho – £26m
That will definitely be enough to help Frank de Boer transition from Big Sam-ball to totaalvoetbal.

= Wayne Rooney – £26m
There were not 21 headlines in two days from one website even when Manchester United shelled out a huge £26m to sign Rooney from Everton in September 2004.

19. Christian Benteke – £27m
You wouldn’t blame either Palace or Liverpool for believing they had got the better end of the deal that took the striker to Selhurst Park last August. Liverpool were not far off getting their money back for the Belgian who flopped at Anfield, while Palace may well have been relegated if it were not for Benteke’s 15 Premier League goals.

18. Marouane Fellaini – £27.5m
Remember when Manchester United’s summer weren’t so efficient? How about signing only one player for a fee, and that player being around £3m cheaper a month beforehand due to a clause you would have been privy to, considering he came from your old club? Viva David Moyes.

17. Davinson Sanchez – £28m
It took Tottenham until August 18 to make their first signing of the 2017 summer transfer window. With a fee rising to a potential £42m, they made sure it was a substantial one, and not Paulo Gazzaniga.

16. Islam Slimani – £29m
The Algeria striker became the then-champions’ record signing when he made the switch from Sporting Lisbon on deadline day last year. Only seven Premier League goals, however, saw the centre-forward linked with a swift exit from Leicester this summer, with Kelechi Iheancho’s arrival further limiting his prospects.

15=. Moussa Sissoko – £30m
If Tottenham were smug for beating Everton to Sissoko on deadline day last year, that feeling certainly didn’t last long. “He needs to work hard and show in the future he deserves to be involved in the team,” said Mauricio Pochettino after dropping the France star less than three months after he arrived. “If you sign a player and you expect something and you do not find what you expect then another deserves to be involved.”

= Erik Lamela – £30m
It did once feel as though Lamela was Sissoko’s natural expensive mistake of a predecessor. But before the Argentinean fell off the face of the earth, he had become crucial to Mauricio Pochettino’s Tottenham system. Eventually.

13. Dimitar Berbatov – £30.75m
The lesson for Manchester City was simple: Make sure you meet the player you want to sign at the airport before anyone else does.

12. Willian – £32m
T1e lesson for both Liverpool and Tottenham was simple: Stop publicising your transfer targets because Chelsea have no scouts and so might steal them.

11. Nicolas Otamendi £32m
City seem to have been trying to replace the Argentina international almost ever since he arrived from Valencia in August 2015. Guardiola wanted two centre-halves last season but only got John Stones, while Otamendi looks set to play a pivotal role again this term due to City’s failure to strengthen in the area they look most vulnerable.

10. Robinho – £32.5m
The rumour is that Robinho still doesn’t realise which Manchester club he signed for when he became the poster boy of the Abu Dhabi revolution in September 2008. Mark Hughes spent more on him than he did on Stoke all of this summer. And Stoke are better off.

9. David Luiz – £34m
The Brazil defender’s return to Chelsea on deadline day last summer was one of those few wonderful deals that come out of absolutely nowhere. It appeared desperate at the time, but with Chelsea switching to a back-three, it turned into a masterstroke.

8=. Shkodran Mustafi – £35m
Valencia have done wonderfully well out of selling centre-halves to the Premier League, with City being the patsies in deals for Otamendi and Eliaquim Mangala, while Arsenal were done out of £35million for Germany defender Mustafi, who the Gunners were prepared to sell only a year later, despite lacking the necessary strength in depth at the back.

= Alex Oxlade-Chamberlain – £35m
Arsenal receiving £35m for a player with 12 months left on his contract would normally be incredible business, but the Gunners didn’t want to sell Oxlade-Chamberlain, who had featured in each of the club’s first three games of this season. Selling to a rival also doesn’t help, and the England international can even play in four positions for Liverpool.

5. Anthony Martial – £36.7m+
Man Utd could end up paying Monaco closer to £60million if Martial achieves the targets required for each of the add-ons included in the deal. That being the case, United will have got a bargain. But Martial is staring at a decisive season, which he has begun with two goals in one start and a two substitute appearances.

4. Mesut Ozil – £42.5m
Real Madrid fans and Cristiano Ronaldo mourned when Arsenal snatched Mesut Ozil from under their noses on deadline day in 2013. But at least English football cherishes his remarkable talents and doesn’t demand that he runs more and constantly tracks back.

3. Gylfi Sigurdsson – £45m
Ronald Koeman spent the whole summer dreaming about finding the right man to supply the bullets for Oumar Niasse to fire Everton to Premier League title glory. He found his Gylfi pleasure four days after the start of the season.

2. Kevin De Bruyne – £55m
The Man City magician became British football’s second-most expensive transfer ever when he arrived from Wolfsburg in 2015. It was a steal. Two years later, in a vastly inflated market, how much would the Belgian fetch now?

1. Angel Di Maria – £59m
KDB was only the second-most expensive transfer after Di Maria, who became Manchester United’s record signing when he arrived from Real Madrid in 2014. Unfortunately for United, though, the winger’s medical failed to spot the absence of a backbone. Taking only a £15million hit on the Argentina star when he shuffled off to PSG a year later represents one of Ed Woodward’s greatest achievements.