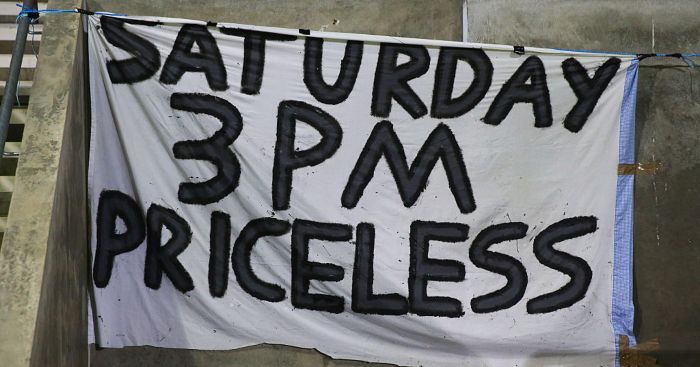 Amazon Prime’s introduction to the plethora of Premier League broadcasters wasn’t universally successful. As any internet streaming service finds, it can be tough to both attract and appease a customer base when clear and smooth web connection is required. On Tuesday night, Twitter was awash with angry consumers bemoaning the picture quality and inability for the match to be seen without constant buffering. Amazon have taken a giant leap by offering Premier League football exclusively on a streaming service, and it’ll be interesting to see how it develops over coming seasons.

For all the research and evidence suggesting that conventional television is becoming obsolete, it isn’t really the case for football. Amazon and Netflix continue to grow, as does YouTube, which the likes of Sky Sports are using more effectively by putting highlights of all Premier League games on for free access. But when it comes to live games, a loyal fanbase still tune in to Sky and BT Sport. Competition from the internet is not the biggest roadblock to greater success of these channels though. Rather, it is the broadcasting restrictions in place on a Saturday afternoon.

Between 2:45pm and 5:15pm, no live football can be shown anywhere in the United Kingdom and it has been that way since the 1960s. While the reasoning for this rule’s original introduction was sound enough – to combat low attendances at lower league and local grounds in case supporters stayed at home to watch on the TV – it has been rendered completely outdated. Not only do the broadcasters have a monopoly on the rights and how much they charge, but with ticket prices escalating right down the divisions, ordinary supporters are being priced out of watching the game they love at every turn. Football is cutting its nose off to spite its face.

With the two existing packages for English top-flight football, as well as the Champions League and Europa League, fans already must pay a four-figure annual sum. Amazon are dipping their toes in the water, showing two full rounds of the Premier League in, both well away from the ‘blackout’ restriction. Although a free month-long trial does technically mean their full coverage is accessible without expenditure, a full yearly subscription costs around £80.

Their pitch is nothing new; Eleven Sports attempted to offer packages for Spain’s La Liga and Italy’s Serie A, but the lack of option to watch it on the TV in the most comfortable setting was a contributing factor in the failure to attract subscribers. The project lasted less than a year. What has worked, though, is the main TV players utilising their own streaming services, such as Sky Go as well as quick highlight reels, meaning fans can watch at home and on the move. That is the real competition for the new kid on the block.

Despite having a lot of weight behind them, it is difficult to see Amazon truly breaking Sky and BT’s shared broken dominance, at least in the short-term. But the manner in which they introduced themselves did make fans sit up and take notice. Rather than opting for yet another weekend slot, which would see them get lost in among their rivals, they have decided to televise 20 games in big chunks, offering viewers their dream scenario. Sky and BT have both seen the benefit of multiple match choice from their European and Football League coverage, but it was always likely to reach another level when done with the Premier League.

Whether Amazon can take on the establishment and win remains to be seen, but they have already made clear something many people had already been saying: the ‘blackout’ rule should be abolished. It is pre-historic and doesn’t even protect what it was supposed to anymore. Attendances are barely affected by TV coverage, if at all, while institutional programmes such as Match of the Day aren’t under threat from the new wave of highlight videos from Sky, available at the earliest convenience once the injunction is lifted on a Saturday, and they wouldn’t be by every game being televised. Sitting down at 10:30pm on a weekend evening is a tradition to lots of people, just as heading to the County Ground for Swindon vs Exeter is. To suggest they attract the kind of audience they do simply because Manchester City aren’t on TV is insulting.

Football fans overseas have much more instant access to the Premier League than those in the UK. NBC Sports in the United States, for example, offers up a similar match choice feature that has worked so well this week for Amazon, and as a result, people here are considering and accessing illegal streams of that coverage here. Clubs and associations everywhere are rightly opposing piracy in football, but it is completely counterintuitive to then charge extortionate ticket prices and restrict viewing times. Many people are losing touch with their favourite sport, but the irony about the rise against modern football is that the biggest problem is actually one of the oldest.

Like anything in life, football must move with the times. Streaming-only services have failed before, and while Smart TVs mean watching games on Amazon is as easy as watching on any ‘regular’ channel, connection issues and the fact it is another expense may count against it. On New Year’s Day, BT Sport will televise multiple Premier League games simultaneously, and it will only add to the calls for that setup to become a weekly occurrence.

If anything proves football is purely about business these days, it is the way it is broadcast. Kick-off times are moved without any thought for supporters and the money it costs to watch those matches is too much for many to accept. It has resulted in the growth of illegal streaming: the true modern legacy of the Saturday 3pm ‘blackout’ rule. The Premier League earns over £2bn from television rights alone, and the strange thing is, making every match available would gain them even more and give football back to the fans. It is time everybody moved into the 21st century.