Home Burnley The anatomy (not literal) of a Proper Football Man 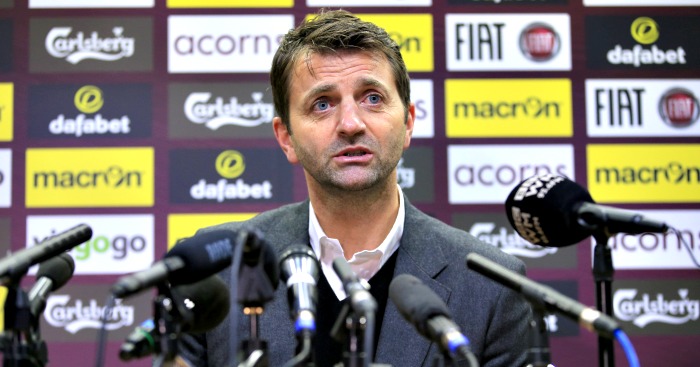 As regular readers will be aware, nearly three years ago myself and Alan Tyers created the concept of a Proper Football Man, inspired by how Jamie Redknapp referred to Tim Sherwood, in pushing his mate for the Spurs job, live on TV.

Since then it’s become a well-used acronym for a certain sort of English ex-player/manager’s attitude to modern football. When we created it, we never thought for a minute it would become so popular, but from the first moment, it really struck a chord with a lot of readers.

Its popularity, I think, is because the PFM concept doesn’t just live in a football context. The PFM is everywhere in society, sitting with his legs apart in the pub or in the office, offering views about things he knows nothing about, mistaking his ignorance for wit and perception, whilst being paranoid and suspicious of education, foreigners and anything he doesn’t understand, and all the while feeling hard done to, despite living a life of considerable privilege. PFM expresses something about the culture we live in.

The PFM is always prowling the football airwaves and there’s so many of them that if you listen and watch a lot of football every week, you’ll hear them all the time, sometimes talking absolute rubbish and getting away with it virtually unchallenged. That’s why we’re here.

Here are just three small examples from this weekend.

Paul Merson referred to Alan Pardew as “a young English manager”. Pardew is 55. Now, even allowing for Merse’s characteristic and somewhat charming avant-garde deployment of the English language, young is not a word you can apply to Pardew. And you’ll never hear Merse or any other PFM refer to a 55-year-old foreign manager as ‘young’ either. In this context, young seems to be used to suggest up and coming, fresh and vital. As though Pardew is The Next Big Thing or an undiscovered talent. You hear English or British managers routinely referred to as young into their 50s. Sherwood is 47 and also apparently ‘young.’ At this point it’s worth also noting that to the PFM foreign managers and players are all just ‘foreign’ and referred to as though they are a single unit.

Which brings us to Timbo talking to Richard Keys this weekend and asking: “Would Steve Bruce do a worse job than Conte is doing?” Keys’ reply: “Fair question.” He remains a key media ally of any PFM.

Well, yes, probably, he would. Bruce is a perfectly decent manager and certainly doesn’t need this sort of puffery to try and over-vaunt him to a level he can’t live up to, but the fact is he hasn’t won three back-to-back Serie A titles nor managed his country. It’s not that anyone thinks Steve is rubbish, it’s just that Conte has a better record by some distance. A classic PFM passive-aggressive standpoint is if you don’t think one of their own is brilliant, you think he’s rubbish. And that just isn’t true.

As you know, this sort of chippy paranoia – that Englishmen are being done out of their birthright to manage football clubs by foreigners – is a key part of the PFM agenda, even though they enjoy every privilege their nationality bestows on them. You usually have to try very hard to get a kicking in the press if you’re a British manager. Rather, you will be vaunted and praised and pushed for bigger jobs on a regular basis.

As a classic example of this, when Sean Dyche’s Burnley beat Liverpool earlier this season, as soon as the final whistle went, Harry Redknapp, working on BT Sport, immediately started to say how Dyche would never get a chance at a big club because he was English and implying that, by beating Liverpool, it proved he was every bit as good a manager as Jurgen Klopp.

Now, to the more reasoned brain, this is clearly nonsense. Dyche may well yet get to manage a big club, we don’t know. It’s unjustified paranoia and inappropriate because Klopp has already achieved so much more and is just four years older than Sean.

Ironically, the effect of this is to actually make out the PFM’s manager of choice is worse than he really is. It makes us suspect the English manager of needing media puffery. I’m sure some club owners are put off English managers because they’re so overrated by their own kind that it blinds prospective employers to what talent they do have. If someone is shouting in your face about how good someone is, you tend to disbelieve them.

But let’s go back to Sherwood. This weekend Dean Saunders asked if Villa would be in such a mess if they’d stuck with Sherwood as manager. This has been consistently said all year long, apparently in wilful ignorance of the fact that at least some of the mess was created by Sherwood, a man who has enjoyed the luxury of being handed two of the biggest jobs in English football without any proven qualifications at all. Ironically, if such a thing happened to a foreigner, Sherwood would be up in arms and calling it reckless and unfair. They’re obsessed with ‘the fashion’ for foreign managers – seemingly not realising that a global game will source its workers globally. But such nuanced understanding seems beyond them. If things go right, it’s down to the manager. If things go wrong, he never bought them players, Jeff.

Perhaps it is the constant whiff of xenophobia about those we know as Proper Football Men that is the most sulphurous thing of all.  From Glenn Hoddle’s favourite put-down – “they’ve gone foreign” – to this awful guff John Hartson said about Oliver Burke’s transfer from Nottingham Forest to Red Bull Leipzig.

“He’s gone over to Germany and I can’t understand that, to be honest with you. I think that stinks of agents more than anything else. How much German football do we all see? We see highlights of Bayern Munich and Borussia Dortmund, and that’s about it. The Premier League is the place to be. I thought that was the next step for him. He’s gone to Leipzig, but what about a Burnley or a Sunderland or a West Brom? It’s only my opinion, but I think he is good enough for the Premier League. I think the Premier League would have tested him and I think that would have probably suited (Scotland boss) Gordon Strachan too. He could have had a better look at him. Who watches the German league? You watch the Premier League, then the Spanish league.”

Aside from the infuriating habit football has of putting a indefinite article in front of a club or player’s name, this sums up the PFM attitude to football, and possibly to life itself: foreign is rubbish, British is best. The PFM always thinks the things he’s heard about are better than the things he knows nothing about. There’s no room for learning. If it was worth knowing, he’d already know it.

The annoying thing about all of this is Hartson is an engaging and entertaining pundit and, like a lot of PFMs, not without charm and value. But this sort of blinkered jingoism does him no favours. It just seems so narrow.

But you’ll often hear them going on about foreign leagues. In what seems an odd sort of jingoism, they’re obsessed with the largely foreign-owned and foreign-populated Premier League being the best, or the hardest, or the most exciting, often despite only a thin, passing knowledge of European football. Politics may have entered a post-truth culture but the PFMs have been living there for years, it seems.

If we on F365 hadn’t pointed these things out, very few in any other parts of the mainstream media would. The PFM gets away with his rubbish time and again. It is as if their status as an ex-player or manager automatically divests unchallengeable wisdom upon them. Or maybe presenters and hosts are just worried they get a stiff right hander if they point out they’re talking nonsense. So we’ll continue to call out the PFMs for their peculiar daftness.

However, Sherwood, Merson, Dyche and the rest are all very entertaining. The former of the trio has an almost hypnotic presence on television, like someone crossed a rooster with an old paper bag. Just because they talk a lot of rubbish doesn’t make them uninteresting and maybe that’s why they get work. We look on in horror and amusement at their…well…I don’t know what it is…weirdness. It is weird, I think.

When I asked followers on Twitter for their favourite PFM quotes, I was absolutely inundated and I’ll conclude this piece with a selection of the finest. Thanks to all who contributed, I could only use a few.

Tim Sherwood: “Players only call themselves No. 10s because they can’t score goals.”

Sam Allardyce: “If my name was Allardici, I would get a top job and win the CL with a top-four side.”

Richard Keys: ‘I’m shocked. OK @WayneRooney has been a little out of sorts but surely he’s got more credit in the bank than to be treated this way?’

Sean Dyche: “Michael Cox? Who did he play for?”

Harry Redknapp (on Malky Mackay): “He’s not raped anyone and he isn’t a paedophile.”

Ian Holloway: “I suppose that’s one of the main reasons women come to football games, to see the young men take their shirts off.”

Phil Brown: “I think the Premier League is the best league in the world. I think that’s why we’re attracting the better foreign players. Why … for the life of me … hasn’t Pirlo played in England? Is he just homophobic?”

Sean Dyche: “I’m not worried about what people think of me.”

Steve Bruce: “I’ve been accused of being a dinosaur because I don’t like the computer.”

@JohnnyTheNic Could have saved yourself loads of time and just sent this. https://t.co/vOB5PgT6u8