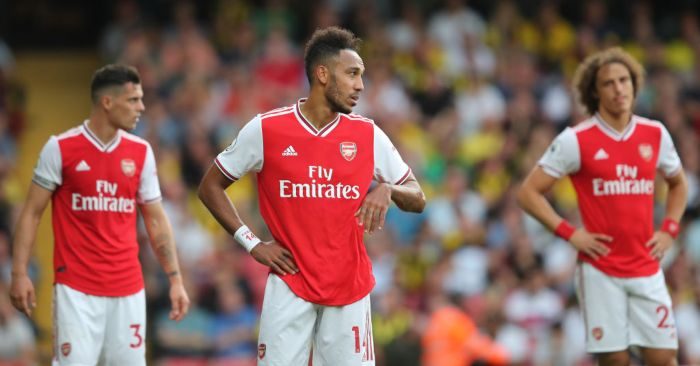 With a hashtag of #WATARS, it always felt like a matter of time before we discovered what arse would try their best to undo Pierre-Emerick Aubameyang’s typical brilliance. The only mistake was to presume that wouldn’t be a plural.

Therein lies the problem with Arsenal. While no team and no player is impervious to an error, one misstep – slight or otherwise – infects this team like a disease. It seeps into the collective bloodstream, pollutes the mind of each player and contaminates their every action.

Of course David Luiz is going to concede a penalty soon after Sokratis fails to complete a simple pass in his own area. Of course substitute Reiss Nelson is going to be bullied off the ball by starter Abdoulaye Doucoure to almost make it 3-2 in stoppage time soon after Granit Xhaka is dispossessed and refuses to track back. Of course Nicolas Pepe will launch a Watford counter-attack after watching those directly behind him show all the resilience of a paper bag in a monsoon. Of course this will happen…

Watford slice a shot that spins out behind the byline, should have been a goal-kick, ref gives throw. Arsenal furious. From the throw, Watford slice another shot out towards the corner flag. This time it is a goal-kick. Arsenal happy. Then pass it straight to Watford. Football.

And of course Arsenal have employed a manager who is the antithesis to their antidote. Unai Emery has faced undue criticism throughout his tenure but he is now the bumbling firefighter charging into a blaze of his own creation with a can of petrol in one hand and a batch of fireworks in the other.

A coach cannot be blamed for certain things. These Arsenal players will find a way of shooting themselves in the foot even if their firearms are confiscated. No side has conceded more penalties since the start of last season, nor made more errors leading to goals. But Emery has a tendency to make things worse. His formation exposes an already nude defence, bypasses a confused midfield and relies heavily upon the individual ingenuity of a blessed attack. It is precisely how Tom Cleverley and Gerard Deulofeu both have as many efforts on goal (7) as Arsenal; 31 shots is the most they have faced in a single game since Opta records began.

The three substitutions he made were like-for-like when real change was required. Neither Dani Ceballos nor Matteo Guendouzi were innocent, but they were not the main issue, and neither Joe Willock nor Lucas Torreira were going to turn the tide. Replacing Mesut Ozil, the only Arsenal player who seemed capable of passing a ball in the second half, was tantamount to surrender.

Emery was able to carve an acceptable season out of clearing up his own messes last season. Arsenal’s second-half improvements became the stuff of expectation rather than hope, the manager rectifying a systemic weakness with a half-time substitution or tactical switch. The first 45 minutes of a game were rendered meaningless, save only for the manager to spot what he had done wrong. But the mistakes and complications are now so numerous and common that he looks overwhelmed.

Their last two results are the perfect microcosm of this team. Arsenal have enough talent buried within their composite parts to recover from a two-goal deficit to draw 2-2 against the Champions League runners-up, but so many problems in the unit itself that capitulation from a two-goal lead at a side without a win in eight league games to draw 2-2 seems inevitable.

“Arsenal were a bit tentative and we could smell that a bit,” said midfielder Cleverley after the game. That a side who have had to change their manager so soon due to their own incompetence can sense and play on such fear speaks volumes. And that captain Xhaka literally admitted he and his teammates were “scared” is deafeningly baffling.

“They pushed for our mistakes, they were playing for our mistakes,” was Emery’s conclusion. To refer to the collective was his only agreeable decision of the day: the Arsenal illness has spread to the manager as much as the players.