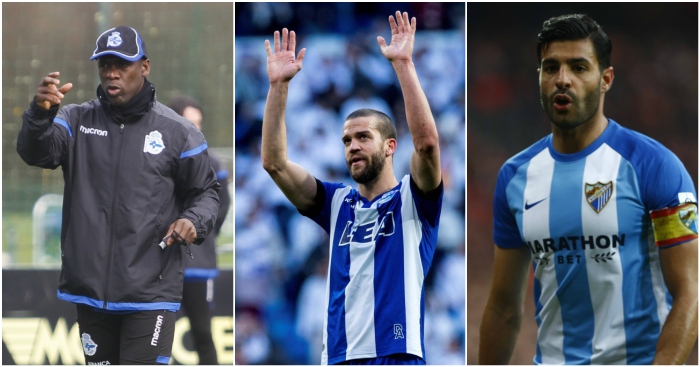 When Abelardo was appointed as manager of Alavés on 1st December, the Vitoria-based club were bottom of La Liga on just six points. Since then, they have embarked on a remarkable run, picking up 22 points from 12 games, and now find themselves nine points clear of the relegation zone.

Their incredible upturn in fortunes means that there are now realistically only four clubs in this season’s relegation battle; Levante, Las Palmas, Deportivo La Coruña and Málaga. Only one will survive.

Barring any miracles, it won’t be Málaga. The Andalusian side sit bottom on 13 points, having been consistently awful all season. Their eccentric president Abdullah Al-Thani kept patience with manager Míchel up until the new year, preferring to argue with sections of the club’s fan base rather than take decisive action to change the club’s fortunes.

Eventually, Al-Thani’s hand was forced, and Míchel was sacked following a run of four straight defeats. His replacement José González has done nothing to reverse the slide, and has yet to taste victory in his six games as manager. They brought in seven players in January, including Brown Ideye and Isaac Success on loan, but so far these signings haven’t had anywhere near the desired effect.

It’s only a few short years since Málaga were knocking on the door of Europe’s elite. They signed players of the ilk of Ruud van Nistelrooy, Santi Cazorla and Joaquín, and came within a hair’s breadth of reaching the Champions League semi-finals as recently as 2013. As they circle the drain in La Liga, those memories seem to drift further and further into the distance.

Five points ahead of Málaga in 19th place lie another club whose glory days are within living memory. Deportivo La Coruña, who can no longer legitimately be called Súper Dépor in their current state, are in the midst of a ten-game winless run. They have conceded the most goals in La Liga this season, but since the appointment of Clarence Seedorf as their third manager of the season their defending has at least improved.

Depor have only conceded twice in Seedorf’s three games in charge. Unfortunately, it hasn’t done them much good. A failure to score in all three games leaves them with just one point since the Dutchman took over.

They have added experience to their ranks in the shape of Martin Krohn-Dehli and Sulley Muntari, but the latter immediately drew scorn from the Dépor fans for announcing at his unveiling that he didn’t know who club legend Juan Carlos Valerón was.

Now that Seedorf appears to have tightened the ship defensively, his next challenge is to find a way to get his strikers firing. Unless they start scoring more goals, their survival hopes look pretty meagre.

Deportivo’s season has been mirrored pretty closely by Las Palmas. The Canarians are one point ahead of Dépor, have also conceded a shedload of goals, and they too are on their third manager of the season.

The latest manager Paco Jémez, like Seedorf, appears to have stemmed the flow of goals conceded. He has been in charge for eight games, and conceded 12 goals in his first four, but only two in his last four games. Recent wins over Valencia and Málaga and draws with Athletic Club and Leganés have given cause for cautious optimism, and there is no doubt that they have improved greatly under Jémez (although they were admittedly starting from a very low base).

The loss of key player Jonathan Viera to Beijing Guoan is a huge blow, though, not least because his departure after the end of the transfer window means it’s too late to get anyone in to replace him.

The Canarian side’s recent improvement will come as a worry to Levante, who currently occupy the last safe spot in La Liga. The draw between Las Palmas and Leganés on Saturday has left Levante only one point above the drop zone.

After a reasonable start to the season, last season’s runaway Segunda División champions now find themselves in an unholy funk. They are currently on a winless run stretching back to November, and have only picked up five points from a possible 39. That’s relegation form if ever I’ve seen it.

Manager Juan Muñiz has been given a vote of confidence by the board, but the axe will surely fall soon if they fail to win in the next few games. Sacking the manager would certainly be a risk at this stage of the season, but it is a risk worth taking to maintain their status in the top division.

None of these teams has an easy run-in. It could well be that the survivors are determined by the outcome of just two fixtures; the six-pointers between Deportivo and Las Palmas on 17th March, and Levante and Las Palmas on 8th April.

Those games are make or break for Las Palmas. Win both matches, and they will be in pole position to stay in the league. If they lose them, they will surely go down. Based on the form of the three clubs at the moment, I’d make Las Palmas the most likely survivors, but that is far from certain.

What is certain is that everything is in place for an intriguing, dramatic conclusion to the season at the foot of the table.