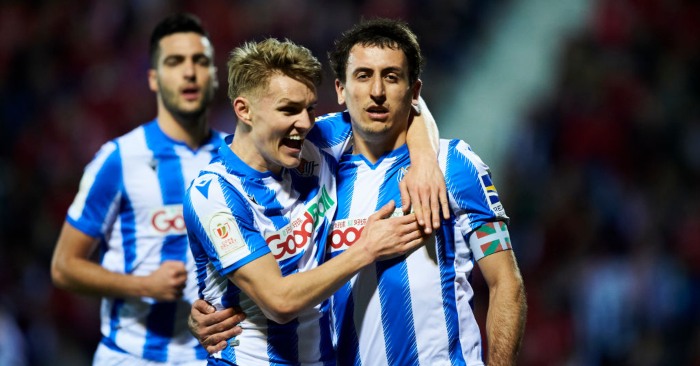 We know all about the superstars at Real Madrid, Barcelona and Atlético Madrid, but there are so many more great players plying their trade elsewhere in La Liga. Here we pick an XI of the best players who exist in the shadows of the Big Three…

Goalkeeper: Aitor Fernández (Levante)
Averaging 4.6 saves per game, Fernández has been more important to his team than any other keeper in La Liga this season. Without his goalmouth heroics, the Valencian side may well have found themselves in another relegation scrap. The Basque stopper’s reputation is growing and growing, and bigger clubs may soon be tempted by his €30m release clause. At 28 years old, he could be a huge asset for Levante for years to come, provided they can keep his suitors at bay.

Left-back: Pervis Estupiñán (Osasuna)
The Ecuadorian full-back, on loan from Watford, has been one of the most exciting players in the league this season, and has been a major contributor to Osasuna’s impressive first season back in the top flight. He a sturdy defender and important attacking outlet in equal parts, and is as comfortable taking on defenders using his speed and skill as he is delivering a cross. With respect to Osasuna and Watford, if Estupiñán’s performances in his breakthrough season are anything to go by, he will be heading onto bigger and better things before too long.

Watford have some serious talent out on loan.

Centre-back: Djené Dakonam (Getafe)
The Togolese defender has been rock solid at the heart of Getafe’s defence over the past couple of seasons, and his performances have been a huge factor in the Madrid side’s ascent up the La Liga table. His consistency has seen him linked with the likes of Arsenal, Tottenham and Valencia in recent times, and his presence would improve almost any back line in world football.

Centre-back: Yeray Álvarez (Athletic Club)
Athletic have conceded just 23 goals this season, fewer than everyone except Real Madrid and Atlético Madrid, and they owe this in no small part to the performances of Yeray and his centre-back partner Íñigo Martínez. Yeray is the junior partner in that duo, but has performed with such assurance and maturity that he gets the nod for this list.

Right-back: Ander Capa (Athletic Club)
The ex-Eibar full-back has come into his own since joining Athletic two years ago. He has earned a reputation as one of the best crossers of the ball in the league, and it is this asset that has seen him pick up four assists this season, in addition to his two goals. But it’s not all about his threat going forward; he is also solid and reliable in defence, and has played his part in his side’s impressive defensive record this season.

Midfield: Santi Cazorla (Villarreal)
Cazorla is one of the best-loved players in football, and it’s easy to see why. He encapsulates everything that is great about the game. An adventurous and unpredictable player who plays equally well with both feet, small in stature but almost impossible to knock off the ball, he just seems to love playing football. The fact that he is playing at all is nothing short of miraculous given the truly horrific injuries he’s had to overcome, and yet here he is – 35 years of age and playing some of the best football of his career.

Midfield: Dani Parejo (Valencia)
Valencia fans have become used to turbulent times on and off the pitch in recent years, but the one thing they can hang their hat on is the consistency and quality of their inspirational captain Dani Parejo. A combative but talented midfielder with great vision and an eye for goal, there have been so many occasions when Valencia have succeeded or survived through Parejo’s sheer will and force of personality.

Midfield: Martin Ødegaard (Real Sociedad)
The Norwegian schemer is now showing the world why he was the most sought-after youngster in world football a few short years ago. He has flourished away from the spotlight of parent club Real Madrid this year, and although Madrid are keen to bring him back, Ødegaard is understandably eager to stay in the Basque Country for at least another season.

Forward: Mikel Oyarzabal (Real Sociedad)
Oyarzabal is now rightly getting the plaudits he deserves as one of the brightest talents in the global game. The talented and tireless left-sided forward is flourishing in this exciting young Real Sociedad side, and reportedly has an admirer in Pep Guardiola, who is believed to want to trigger Oyarzabal’s €75m release clause to bring him to Manchester.

Because Ødegaard is setting him up, look at Odegaard’s game vs Alaves, 13 chances created, one of them was the assist of the season to Oyarzabal. Took out 6 players with one ball.

Forward: Roger Martí (Levante)
One of the most underrated players in the league. After almost single-handedly bringing Levante back into the top flight three seasons ago, Roger then suffered a cruciate ligament injury that kept him out for the best part of a season. Now fully recovered, he is finally starting to realise his full potential with 11 goals for the Granotes this season. The fact that Barcelona wanted to buy him in January but reportedly couldn’t pay his €30m release clause shows how far he has come.

Forward: Lucas Ocampos (Sevilla)
Sevilla sporting director Monchi looks to have pulled off yet another masterstroke with the signing of Ocampos last summer. They paid only €15m to Marseille for the services of the 25-year-old Argentine, who has become one of the stars of the La Liga season. His 10 goals and two assists have helped his side to third in the league, and his €70m release clause means Sevilla will make a tidy profit should any reported links to Manchester United come to fruition.