Home F365 Says The best Man Utd fans can hope for? That it doesn’t get much worse… 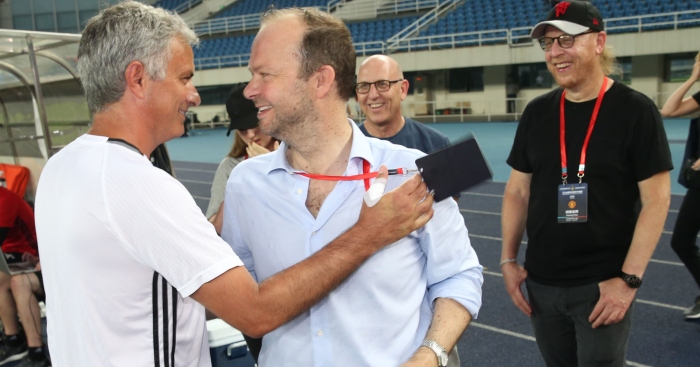 Is there a Premier League side that would swap places with Manchester United right now? Perhaps with Fulham as the exception, it seems 18 other clubs will enter 2019 with greater optimism for what the New Year will bring. Even Huddersfield, second from bottom, retain hope. For United fans, what little optimism may have lingered before the trip to Anfield almost certainly disappeared by the time they made their return trip up the M62 on Sunday evening.

Jose Mourinho did his best to manage expectations once it became clear that he would not receive the expected backing in the summer transfer market. Since August, United’s ambition has been lowered with each passing month, from fighting for the title to scrapping for fourth. Even that now appears beyond them.

After their most dispiriting Anfield defeat in years, few people were buying Mourinho’s proposal that the Red Devils were now aiming to finish in the final Champions League place. Whether Mourinho believed it himself is certainly debatable, but he could not say otherwise. Privately, he may well have written off season like so many of the supporters who watched the Liverpool defeat unfold ashamed but not surprised.

If United are to achieve Mourinho’s stated aim, many suggest that it cannot be done while he remains at his post. This group of players is not performing for the manager and while he had little choice but to emphasise their ‘honesty’ on Sunday, there have been times this season when the team seemed to have been playing to get the manager sacked. Whether that’s true is not important – any manager will always carry the can for performances as disjointed and dispirited as United have offered.

It seems the only people not pointing the finger at Mourinho are those who can squeeze the trigger in his direction. The United board have little appetite to change manager, that much is clear. They don’t need the hassle and they don’t want the bill that would come as a result of cutting Mourinho loose not a year after they chucked a lucrative new contract in his direction. Nor do they want the subsequent introspection over their role in the manager’s failings. If Ed Woodward and his cronies in the boardroom possess an ounce of self-awareness, then they would have no choice but to accept the charge of ‘naivety’ levelled at them by Gary Neville.

History suggests the owners and board will only be pushed so far. When it became clear David Moyes and Louis van Gaal were costing the club the profits reaped from Champions League participation, they were shown the door. It seems most likely that Mourinho will only follow once that threshold for failure has been met, especially with very few obvious replacements waiting to step in.

When specifically might that time come? If the Red Devils maintain the same points-per-game haul, then they will finish the season on 58 points. If fourth-placed Chelsea also keep ticking along at the same rate they have all season, then they can reach that total by matchweek 27. That happens to be the weekend United host Liverpool at Old Trafford, a few days after the Champions League last-16 first leg against Paris Saint-Germain. United’s defeat at Anfield gave us a fair idea where they are heading this season and things will be even clearer after the return clash. Unless there is a dramatic and unexpected twist between now and then, Mourinho’s fate will almost certainly be decided by the time March arrives.

But in the short term at least, it seems Mourinho and United are stuck with each other. For vasts swathes of the dressing room, for those who haven’t lost the will to care, that is bad news. If Paul Pogba hasn’t already written off his United career for a second time, then the club’s persistence with Mourinho and the looming January transfer window will surely strengthen his desire to quit.

Reports suggest the board have belatedly reached the same conclusion as Mourinho over Pogba and they are now willing to entertain offers next month when previously they were adamant that their most marketable face was not available for transfer. Even Woodward can see that Pogba and Mourinho cannot co-exist in the same dressing room. One has to go and if that isn’t to be Mourinho just yet, then their record signing will have to be the one to make way. ‘No big deal’, according to Roy Keane.

Woodward would most likely prefer a loan move to get Pogba out of the country until the chaos gives way to some clarity. If, somehow, Mourinho masterminds the most surprising of revivals and justifies his position, then Pogba could be sold in the summer. If by then Mourinho has gone, then Woodward would be loathe to lose his fattest cash cow without seeing whether a different voice might inspire the France midfielder to straighten up his act.

Whether and however Pogba departs in January, Mourinho wants reinforcements. The message over his centre-backs couldn’t be clearer, even if he makes Chris Smalling and Victor Lindelof take the field against Cardiff on Saturday while wearing dunce’s hats. Mourinho complained long and loud when it seemed he wouldn’t get his way during the summer but even now, with the justification of United’s atrocious defensive record, the manager is not going to be given the chequebook while the uncertainty over his own position remains even greater than at the start of the season, when Woodward went to great lengths to discuss why he did not feel his manager was worth backing in the transfer market.

The sorry situation leaves Mourinho having to muddle through with the seemingly dwindling number of  ‘honest’ players he feels he can trust. Most of those individuals are not good enough for Manchester United according to Keane, but they will at least try. And that highlights the depths United have plumbed. The most Mourinho and the fans can hope for is effort, the absolute bare minimum demanded elsewhere. The professional pride that Keane discussed on Sunday is most certainly absent among too many of United’s stars.

With many of the players not of the quality traditionally expected at Old Trafford and some who are not motivated to apply themselves, is there any logic present in Mourinho’s quest for fourth place?

Unpredictable formations, tactics + selections but entirely predictable result, performance + gloom about the decline of this great club of ours.This season is write off + has been since the gutless shambles at Brighton + then W.Ham. Like a stumbling drunk, change is inevitable.

It certainly appears not. Mourinho said last month that he expected the remaining games in 2018 would catapult United back into the Champions League spots. A day after he stated United’s intention, they drew 0-0 at home with Crystal Palace to leave them seven points off the top four and facing an unprecedented task to climb into it.

Five games into the eight-match run that Mourinho decreed as pivotal, they have won once. United are now 11 points off fourth place and despite sitting in sixth, they are closer to the points tally of 14th-placed Newcastle than Chelsea in the final Champions League qualification spot. What was a tall order that had never been achieved by any side in the Premier League era, now appears almost utterly impossible.

Indeed, Mourinho’s men are one bad weekend away from the bottom half of the Premier League table, with Wolves, Everton, West Ham, Watford and Bournemouth all within three points of the Red Devils.

The best United fans can hope for? Probably that it does not get any worse. But while all the major protagonists remain in their place and the air of mistrust and resentment continues to linger over Old Trafford, even that pessimistic prospect seems overly optimistic.